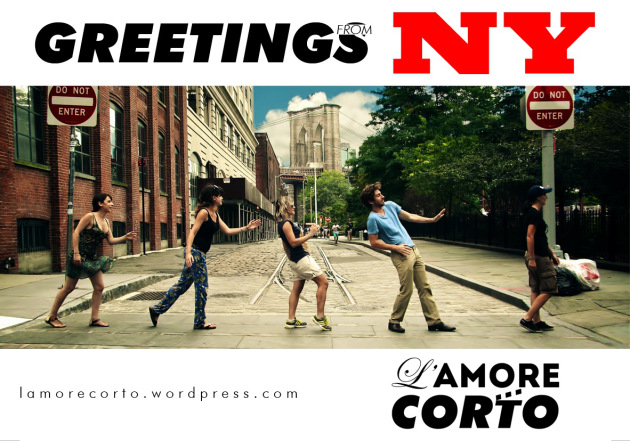 Following up its debut on the 14 of May, L’Amore Corto, an Italian short film about love, has quickly attracted the attention of experts in the movie field and gained important honors and awards.

Let’s explore more about it with an interview to Laura Gasperini, the assistant director, and one of the producers, of this short film.

1.    Describe L’Amore Corto to those who haven’t seen it yet.

Laura: L’Amore Corto is a short film about a love story between Lorenzo and Giulia, two Italian “characters” in New York that want to make their dream come true: make a “feature film” (aka a long term relationship), having to find the budget for it.

Will they find it? Well, you have to watch the film to discover it!

Laura: I met Valentina Vincenzini, the director, last year in June, when she interviewed me for Farespettacolo.it. A few days later she told me she had this “story” in mind and she would have really liked to make a film out of it.

So we decided to make it “as Italian as possible”: Italian crew, Italian location, Italian story. It was also a good moment to be “so Italian in NY” because last year it was the Year of Italian Culture in The United States: we were sure we could have find some support from it.

3.    Which were the difficulties of making this film?

Laura: Like every independent film, the main difficulty was: “where do we find the money for it?” And especially in such a short time. In less than a month we were able to raise a decent budget through crowd funding and sponsors: we definitely did a good job!

The strong point of L’Amore Corto, and maybe it’s reason of success, is that it tells something real, something that people in the film business (and not only) have to deal with everyday: which is the best way to find the budget to make a project come true?

The funny part is that most of the things Lorenzo (the male protagonist) does or says in the movie are things that had actually happened to us in the short twentyfive days of pre-production, from how to find the funds to produce it, to how  to market it and make it become well-known.

As of now, in three months of distribution throughout the world we have eighteen official selections and got two awards. For these reasons we have to say that we are very happy with the results gained so far and hope to see more awards coming.

Laura: I co-produced the film together with Valentina Vincenzini and Francesca Cuccovillo. I was also the Casting Director and the 1st Assistant Director on set.

5.    How closely did you work with the director in the creative process?

Laura: I worked very closely with the director from the beginning to the end. Even though my help was more on the production side of the filmmaking process, I assisted Valentina (the director) on the creative part too. But I gave  her a lot of space for her ideas: it was her first film and it was important for her to experiment her creative choices. I believe it was the right thing to do.

6.    I saw that the crew is mainly composed by Italians, why this choice?

Laura: The choice of having a lot of Italians in the crew was the most “natural” way to go, first of all because the short film is in Italian.

Thus It was easier for most of the crew members to understand what was going on in the story: some crew members, like for example the sound mixer on set, had to be Italian, to get the lines correctly.

7.    How difficult was it to produce and shoot the film in New York?

Laura: When you shoot in NYC you have  to follow step by step the procedures that the mayor’s office of film requires, it’s not difficult, but if you don’t follow the rules you get kicked out by your location very quickly. If you are respectful then everyone is respectful with you.

8.    What was the most challenging thing about making this film?

Laura: Well, we had quite a day, I have to say!

We shot the film in one day and the b-roll for the “music video part” the day after, in about 4-5 hours. The most challenging thing was being able to shoot the three locations in one day, while it was raining outside for most part of the day.

We had to move all the crew and equipment twice and we had very little time at each location, but in the end we accomplished everything, it stopped raining a couple of hours before the sunset, and everything turned out to be great!

A little bit more about you…

9.    When did you realize that directing and producing films was your life’s calling?

Laura: I started falling in love with cinema when I was living in Australia in 2001. I happened to have a lot of “Aussie” friends that passed me their passion for cinema.

I studied Cinema at the University of Pisa and graduated at the New York Film Academy in 2011. After that I started working as a producer and assistant director in many projects and as freelance video maker too.

10.  How would you describe Italy to your American friends?

Laura: Italy is definitely the “poetic” place that someone could imagine. There is the (bad) habit of thinking that if you’ve visited Rome or Milan, they’ve seen everything Italy has to offer. Wrong.

I’ve always recommend my friends to visit the smaller towns and get out of the “tourist routes” as much as they can, so that they can have a taste of what “real Italy” is.

11.  Which places in Italy are closest to your heart?

Laura: It’s of course the place where I am from, the Maremma, in the beautiful Tuscany.

I go back once a year and every time I try to enjoy the food and the views as much as I can.

Another place that I am really attached to is the beautiful city of Pisa, where my dad’s side of the family is from. I love its hidden history, and Piazza dei Miracoli with its leaning tower is in my opinion one of the wonders of the World.

Laura: I’ve always directed comedies and  I am experimenting the documentary side of filmmaking, which is as much work as shooting a film, but it is for sure very rewarding too.

Laura: I don’t think I have a favorite film or genre, I vary a lot. I could make a very long list out of this question!

14.  What are the issues in the film industry you’re concerned about?

Laura: The main issue I believe is the “lack of space” for new directors. Unless you have a ton of money to produce your feature film, it’ s very hard for a production company to even notice you.

15.  Why should people see L’Amore Corto?

Laura: People should see L’Amore Corto because it tells you in a funny way how hard it is to make your dreams come true. It’s short and sweet, and makes you smile and think at the same time.

Laura: I really hope I will be able to work on a feature film in the future, hopefully soon. I also would love to work for a big production company and be a well-known film producer…one day…

Ville in Italia does its best wishes to Laura and to L’Amore Corto!