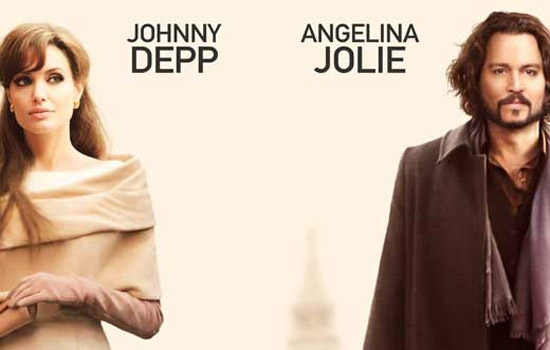 In addition to Angelina Jolie and Johnny Depp the movie has another ‘American’ star,

who is actually as Italian as you can get: we are talking about the famous Campari, Cinzano Rosso and Soda cocktail which, before becoming the favorite of Angelina Jolie and Johnny Deep, was James Bond’s cocktail in “Casino Royale” and “A View to a Kill”.

The Giudecca, St. Mark’s Square, the Arsenal, the Rialto fruit and vegetable markets, the historic Hotel Danieli and the prisons of the Most Serene Republic of Venice (now used for holding exhibitions and other events): these are the main locations used in this thriller about an Interpol agent who exploits an American tourist in an attempt to escape from a criminal with whom she has had a complicated relationship in the past.

Von Donnersmark continues: “During my childhood I spent a lot of time at the Zattere with my uncle and aunt who are Venetian. I have lots of old friends there and now many new ones”. And this famous area of the city can also be considered another of the movie’s symbolic venues: it was here that Johnny Deep decided to moor Vajoliroja, the 50 meter boat the actor had moved to the Lagoon from the Caribbean so he could stay in it at the weekends during filming.

The boat’s name is a combination of the names of the owner, his wife and children (Vanessa – Paradis-, Johnny, Lili Rose and Jack: Vajoliroja) and it can be rented during the summer months for trips along the coasts of the Mediterranean

. Built by Turquoise Yacht Construction of Istanbul, in Turkey, it has two 480 horsepower Caterpillar engines and can reach a cruising speed of twelve knots. It can accommodate 10 – 11 people on board, divided into 5 cabins and has an 8 man crew. You can find everything you need to have fun on board: there is a 115 and a 60 horsepower tender, two kayaks (a double and a single), two complete windsurf tables, a pair of water skis and some diving kits.

If you do not want to swim you can settle down on the damask cloth sofas, surrounded by the sparkling silverware, and enjoy the audio/video system complete with satellite TV (with internet and telephone support), a Playstation 3, a Nintendo Wii and the essential Ipod dock. The cost? 98 thousand dollars a week, if Johnny Deep agrees.

Angelina is looking for a new home

The outskirts of Verona

A particularly striking feature of Verona is the strong visual impact created by the contrast between the white marble and the red bricks of its splendid Gothic buildings.

The city’s most famous monuments include Juliet’s House and the Arena,where the famous Opera festival is held that, since 1913, has livened up the Veronese summers, along with the theatrical, dance and music shows held at the Teatro Romano.

and, more specifically, the Valpolicella area

, to the east of Lake Garda , have bewitched Brad Pitt and Angelina Jolie who seem to be intent on buying a home in the area. Villa Costanza, Villa Serenella, Villa Santa Sofia and Villa Giona, the latter of which also includes a farm, are the four properties currently being linked to the two actors, all of which are in San Pietro in Cariano. Angelina Jolie fell in love with Italy when filming “The Tourist” and decided, along with her husband, to add a new luxury residence to the two they already own (the villa in Los Angeles where they live and a 19th century residence in the French quarter of New Orleans, purchased in 2007 for three and a half million dollars).