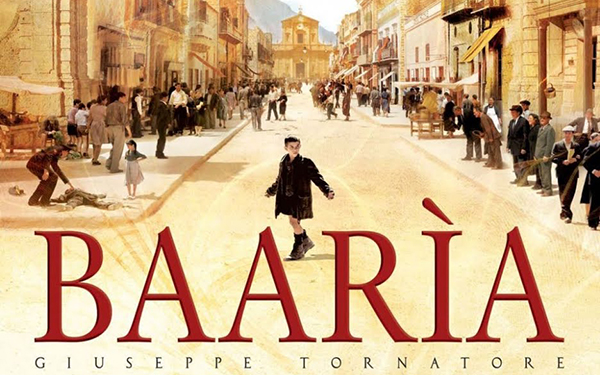 Baaria”, “Basilicata Coast to Coast”, “Loose Cannons”, “Focaccia Blues”, “The First Beautiful Thing”, “The Man Who will Come”, “Il Figlio più Piccolo”: we create a tour map of some of the most beautiful places in Italy that were used as sets for the winners of the Globo D’Oro 2010 – the awards assigned to Italian movies every year by the foreign press in Rome

Let’s start in the south, in Sicily, with “Baaria” directed by Oscar winning director Giuseppe Tornatore (who won in 1989 with “Nuovo Cinema Paradiso”).

Baaria is the ancient name of Bagheria, the director’s hometown, 15 Km from Palermo. It is a magical place (in Arabic, the name means “door of the wind”), that has managed to preserve the charm of the Sicily of the past, with its dusty streets and old barrows, decadent and sumptuous churches and buildings as well as a sea of rare beauty.

“Baaria” won the award for best director and best musical soundtrack (by Ennio Morricone), whilst “Loose Cannons” (Mine Vaganti) directed by Ferzan Ozpetek, the true winner of this edition, won best film, best screenplay, best emerging actress (Nicole Grimaudo) and best cinematography. The film is about a likeable family living in Apulia that owns a pasta factory in Lecce, Salento. The movie, says its director, is also a tribute to this wonderful baroque city that, he adds: “gave me a marvelous welcome.” The movie was also favorably received in the States, in fact, “Loose Cannons” got a special mention at the Tribeca Festival, with the following motivation: “… For making us laugh, cry and want to immediately book a trip to southern Italy, we reward the director Ferzan Ozpetek, his extraordinary cast and his team with this special mention.”

Through the vehicle of the pasta factory, the movie tells us about the region’s long culinary tradition which often plays a fundamental role in Italian films. The same can be said for “Focaccia Blues”, also set in Apulia, this time in the city of Altamura

The town’s powerful megalithic walls (from which its name alta–mura or “high walls” originates) were raised five hundred years before the birth of Christ.. This movie tells the (true) story of the baker Luca Digesù who, with his “focaccia” (flat bread made with olive oil and herbs), created using top quality products, typical of the area, caused big problems for the local McDonalds which eventually had to close down. According to the foreign press, “Focaccia Blues” is an “unforgettable movie”.

Moving from Sicily to Apulia, we can stop off in the lesser known but no less interesting region of Basilicata. This region has dual ties with the world of cinema: it was the place of origin of director Francis Ford Coppola’s family

(who came from Bernalda, in the province of Matera), and also provided the setting for Mel Gibson’s “The Passion of the Christ”. The beauties of this region were also immortalized in the amusing musical road movie “Basilicata Coast to Coast” by Rocco Papaleo, which won the best debut movie award. After a quick trip to Rome, where Carlo Verdone’s “Io loro e Lara” is set, winner of the best comedy award, we get to Tuscany and, more precisely, Radicondoli,

in the province of Siena, where the Tegoni farm and the Castle of Montingegnoli provided the setting for some scenes from Giorgio Diritti’s “The Man Who Will Come” (Foreign Press Grand Prize) and Livorno, the setting for “The First Beautiful Thing” by Paolo Virzì (for which Stefania Sandrelli won the best actress award).

Apart from a brief “foray” to Radicondoli, “The Man Who Will Come” was mainly filmed on the mountains that separate Tuscany from Emilia Romagna, the province in which Pupi Avati’s “Il Figlio più Piccolo” [The Youngest Son] was shot, in Bologna (best actor – Christian De Sica; best newcomer – Nicola Nocella), which was also partly filmed in Tivoli, near Rome.