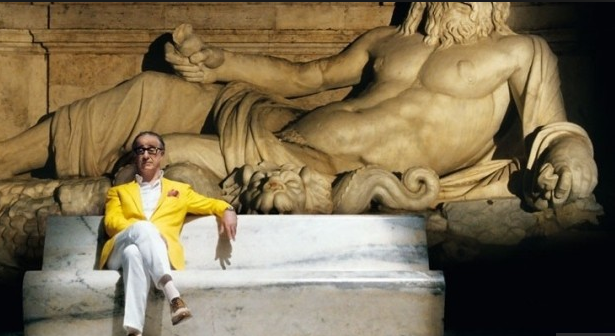 The coveted statuette has fulfilled a path that has quickly collected other major international awards such as the Golden Globe, a prestigious award of the Hollywood Foreign Press Association and the English British Academy of Film and Television Arts (BAFTA).

But it must be noted that the film deserves an award particularly for the way in which it managed to represent Italy through its greatest icon: Rome.

In fact, the “great beauty” is the ancient and eternal beauty of which Rome is the emblem.

From the terrace of the protagonist’s home, Jep Gambardella (played by Toni Servillo), the city appears in all its uniqueness. The house is in the Rione Celio between the Roman Forum and the Domus Aurea overlooking the Coliseum.

One of the places filmed at the beginning of the film is the Fontana dell’Acqua Paola, which is located at the top of the Janiculum. From here you can enjoy one of the most beautiful views of Rome. Descending towards the Tiber, we encounter the Accademia di Spagna where the Temple of San Pietro in Montorio, also known as the Temple of Bramante, is located.

The film leads us to other landmarks of the city such as the Trevi Fountain (formerly consecrated place by Anita Ekberg in “La Dolce Vita”), the Baths of Caracalla as well as Piazza Navona in which Sorrentino suggests we admire at night.

There are several ‘night stops’ made by the protagonist: the Aventine Hill where the Priory of the Knights of Malta gate is located and from where you can see the dome of St. Peter’s (the charming Garden of Oranges and the Santa Sabina church are not far there), and museums that in the film ‘recite’ the houses of the Roman princesses.

At Palazzo Barberini the director focuses on La Fornarina, which is a masterpiece by the Renaissance painter Raffaello Sanzio. The painting portrays Margherita Luti with bare breasts, presumed to have been the painter’s lover.

At Palazzo Spada, the camera moves along the perspective gallery, designed by Borromini (famous architect of the ‘Baroque Rome’) with

the expert advice of a mathematician to create an optical illusion. The gallery is eight meters long but seems much longer thanks to the rising floor and diminishing rows of columns.

The list of Roman palaces and museums “explored” by Sorrentino is long. It includes: Palazzo Braschi, Villa Medici, Capitolini Museums, Palazzo Sacchetti, Palazzo Altemps, situated near the Palazzo Madama (Senate of the Italian Republic) and the National Etruscan Museum of Villa Giulia.