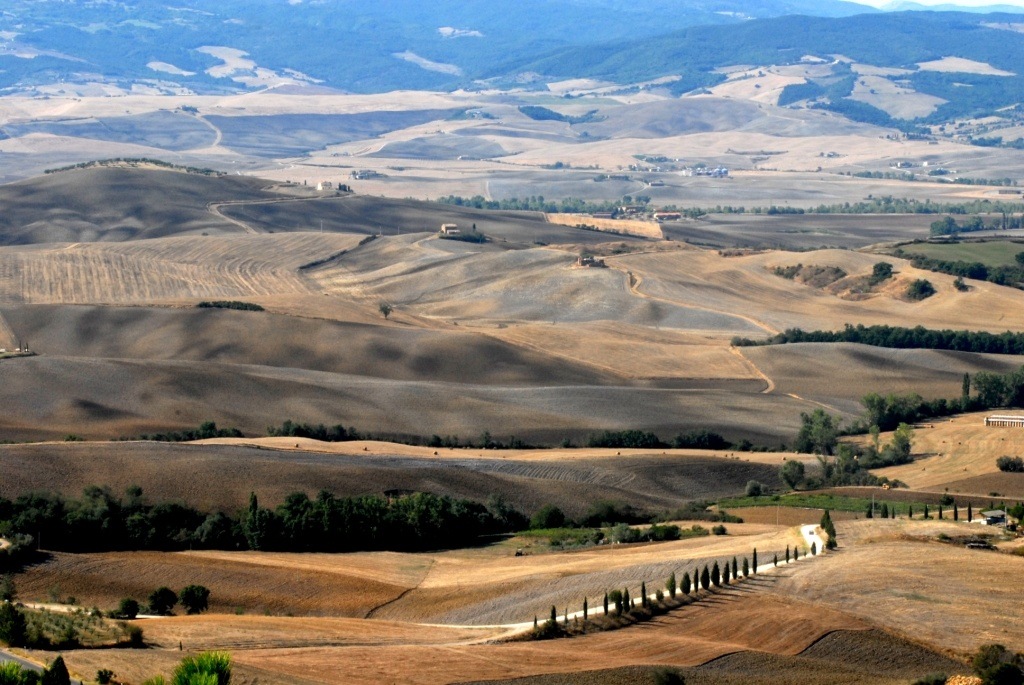 24 Jan 2020 The spa resorts of Tuscany: wellbeing at the frontiers of time

Posted at 12:15h in Italian itineraries by Caterina Lancellotti

Tuscany is the Italian region with the highest number of spa resorts due to the presence of numerous reserves of water with a temperature that fluctuates between 25° and 54° C. They are famous all over the world for the treatment of many different medical conditions: another reason to visit this region to enjoy the landscapes as well as the artistic and food-wine heritage. 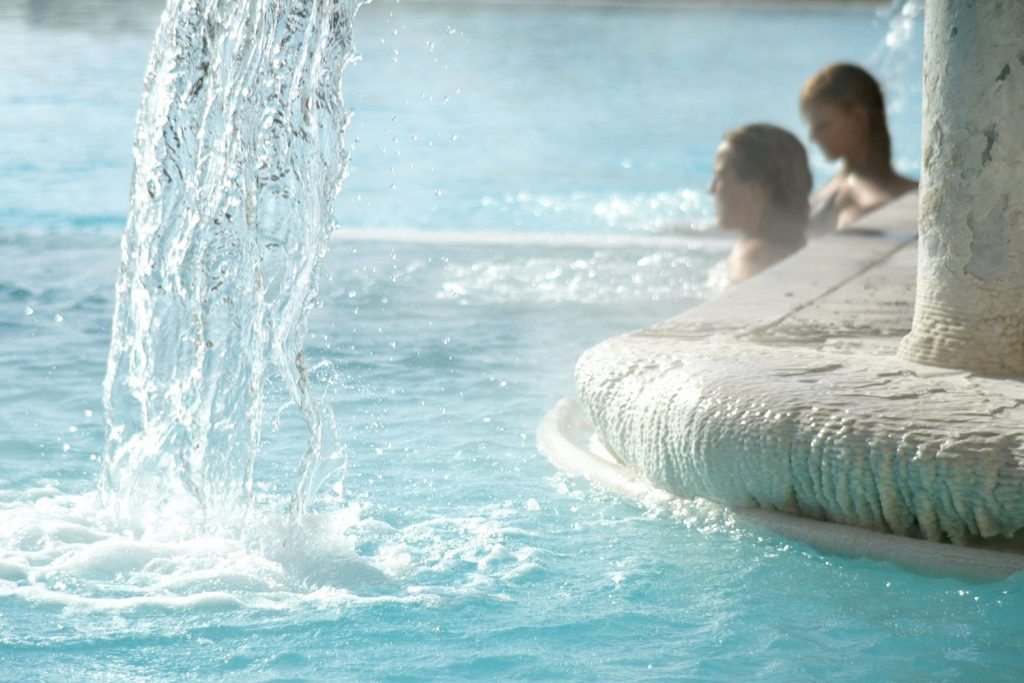 The spa resorts of Tuscany

Traveling through Tuscany from north to south it is possible to trace a very rich itinerary of spa resorts.

Spa resort itinerary I: from the province of Lucca to Pisa

We start with the Terme di Montecatini, historic springs that were very popular in the Seventies and Eighties, particularly renowned for treatments considered to be good for the health of the liver and lungs.

This spa resort has always been very well maintained and looked after, almost certainly due to its proximity to Versilia, the famous stretch of coast that, from Torre del Lago Puccini extends as far as Forte dei Marmi and Pietrasanta, places that are celebrated for their nightlife and celebrities. 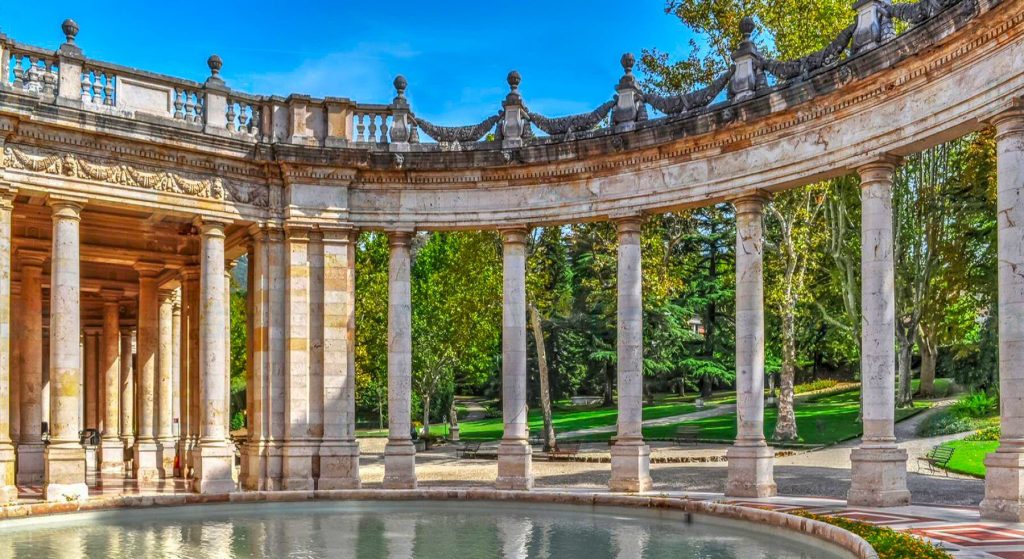 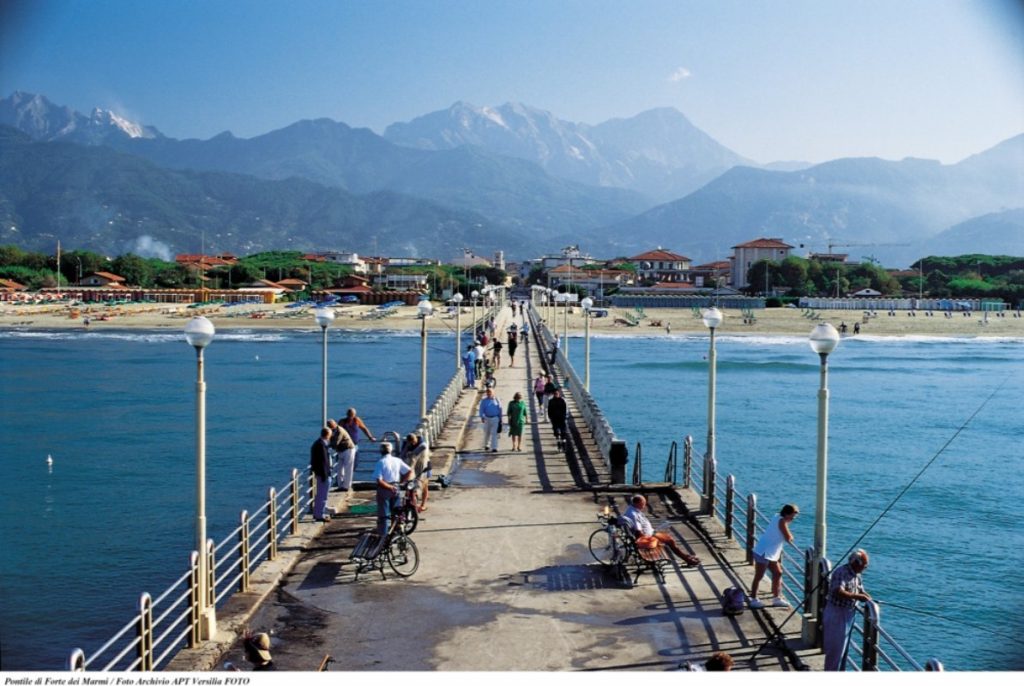 Not far from Montecatini we have Bagni di Pisa,  which were already well-known in Etruscan and Roman times, enclosed within the magnificent palazzo that used to be the summer residence of the Grand Duke of Tuscany on top of a hill that offers a superb view of Pisa and its Leaning Tower.

The Grotta Giusti is very famous in the Pisa area: this natural Turkish bath is considered to offer protection against joint pain and respiratory disorders. Some illustrious people sought relief in the Grotta including Giuseppe Garibaldi, the epic 19th century hero of the Risorgimento and the great opera composer Giuseppe Verdi.

Itinerary II: from Arezzo to the Crete Senesi

It is as we descend into southern Tuscany, however, that we find the most spectacular thermal spring waters immersed in timeless nature. 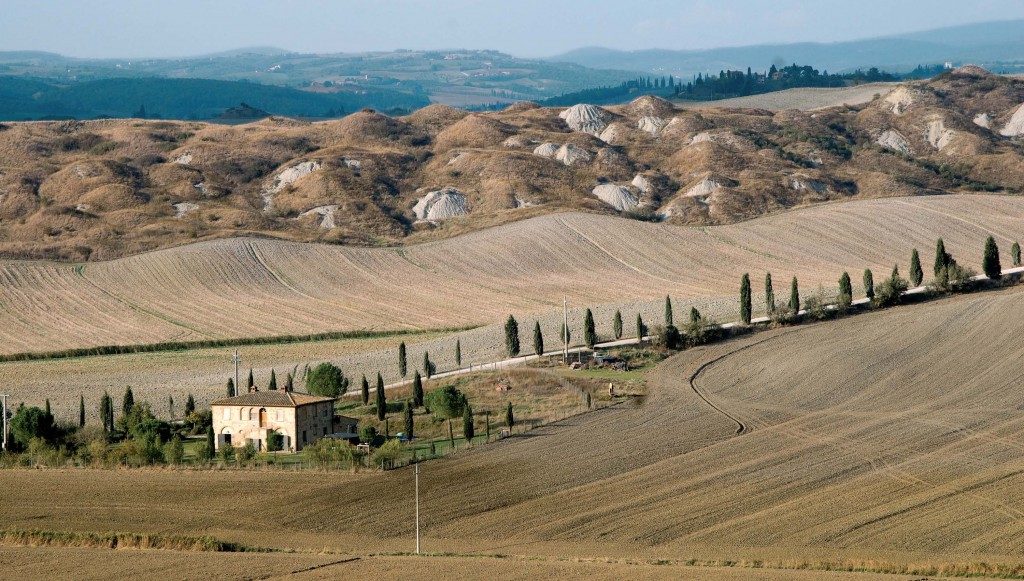 Crete Senesi, the so-called “desert” that encircles Siena from the south.

The spa resort of Rapolano, in the province of Arezzo,

On the border between the Sienese Chianti and the Val di Chiana (land of the renowned Chianina steak) in the province of Arezzo, the spa resort of Rapolano offers the chance to regenerate in the sophisticated naturalistic setting of the Crete Senesi, the so-called “desert” that encircles Siena from the south, a broad, atmospheric panorama produced by spectacular erosive phenomena such as the furrows that break up the gentle slopes of the Sienese hills.

Itinerary III: from the province of Siena to Grosseto

Between Siena and Grosseto we find the splendid spa resort of Petriolo. This is also totally immersed in nature: surrounded by dense woods of oak and chestnut trees, it is located on the Farma stream and emits 43° sulfurous waters that are particularly good for treating the respiratory tract.

Another feather in the cap for the whole of Tuscany is Chianciano Terme, very near Montalcino and Montepulciano, two symbolic places for wine and traditional Tuscan cuisine that reaches its peak in these very areas. 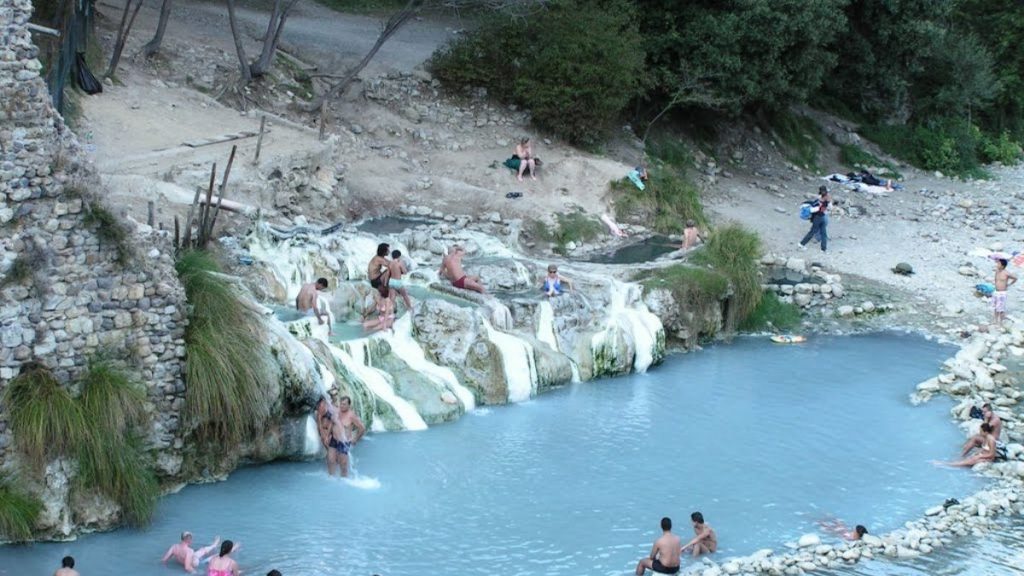 Itinerary IV: the Val d’Orcia spa resort to the south of Siena

The spa at Bagno Vignoni, again in the province of Siena, in the splendid Val d’Orcia, is also very beautiful.

This spa is a true open air spectacle: in fact the slightly steaming waters gush directly out into an enormous ancient tank situated in the town square – the “water piazza”.

The temperature of the waters is 50° and they are used by the neighboring establishment to treat rheumatism, skin rashes and the after-effects of bone fractures.

The rectangular-shaped spring water tank, which is 49 meters long and 24 wide, occupies the whole square of the small town and is overlooked by Palazzo Piccolomini, which Pope Pius II had built, and the Loggiato [arcaded loggia] dedicated to Saint Catherine of Siena. 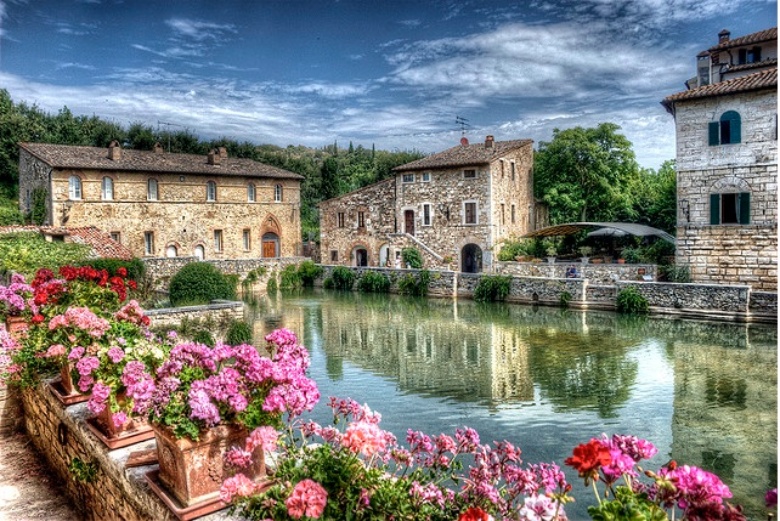 In fact in 1300 the Christian saint used to stroll beneath this loggia. A century later Lorenzo the Magnificent, classical scholar, poet and illustrious member of the Medici family from Florence, also used to immerse himself in these warm, health-giving waters.

It is no longer possible to bathe in the piazza-tank, but it is still an extraordinary spectacle: it gives the sensation of being suspended from reality, especially on winter evenings when the lights merge with the steam emanating from the hot water to create a mysterious, fairy-tale like atmosphere that has enchanted travelers and great personages from all times.

Not just Saint Catherine and Lorenzo the Magnificent, but also Pope Pius II, the author Charles Dickens and the poet Gabriele D’Annunzio. 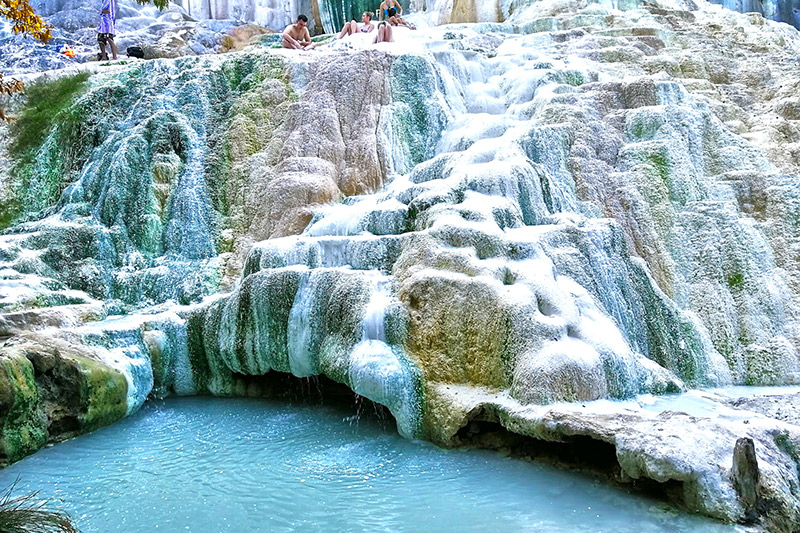 Bagni San Filippo, in the heart of the Val d’Orcia Park.

Just a few kilometers away from Bagno Vignoni we come across the spa resort of Bagni San Filippo in the heart of the Val d’Orcia Park.

Bathing in these sulfurous waters is a very ancient tradition which has its roots back in the Middle Ages.

This location is made even more stunning by the calcareous deposits that have formed around the basin creating a landscape that is almost lunar in places and gives the sensation of bathing beside a mountain of snow.

It is no coincidence that this basin, which can be accessed free of charge, is also known as “the white whale waterfall”. 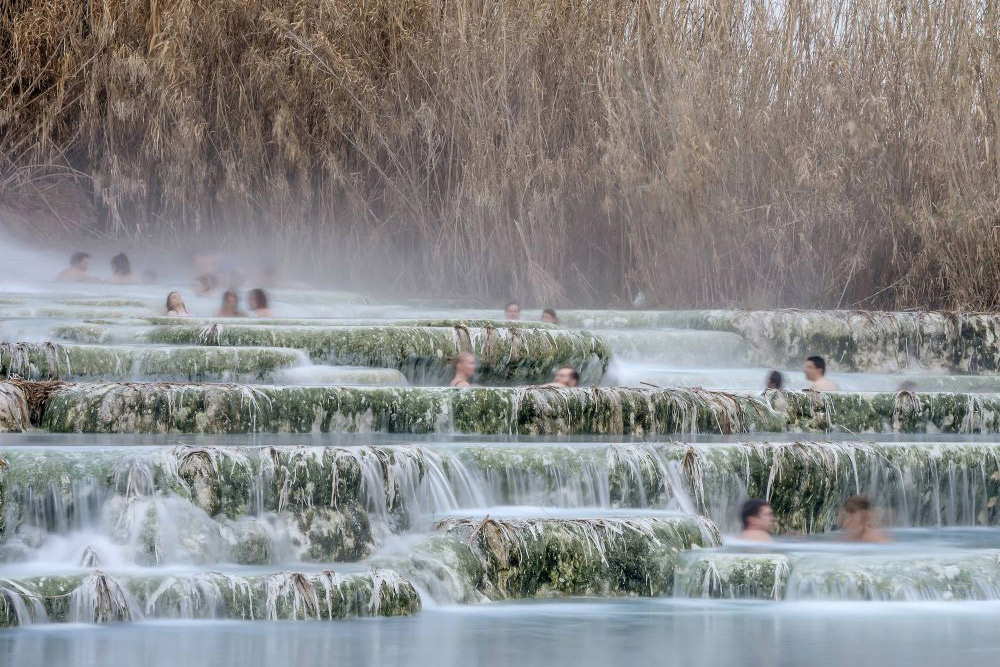 Greatly loved by the local population and visitors because of the naturalistic surroundings that adorn them, these enormous calcareous basins were created over the centuries by the calcium-rich thermal waters that flow down as a waterfall from one level of the basins to another. 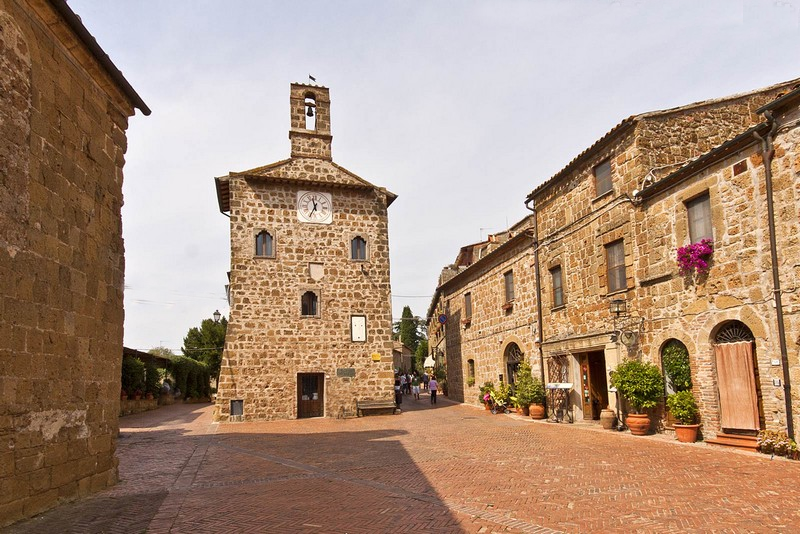 The spa resort of Saturnia is a strategic stopover for visiting some of the most characteristic corners of the Maremma area, from the villages of Pitigliano (a little town perched on a spur of tuff rock), Sorano, Sovana and Manciano, to the splendid Argentario coast, with the mountain of the same name, Porto Santo Stefano, the Lagoon of Orbetello, Talamone and the Parco dell’Uccellina.

Itinerary VI: in south-west Tuscany, on the border with Umbria 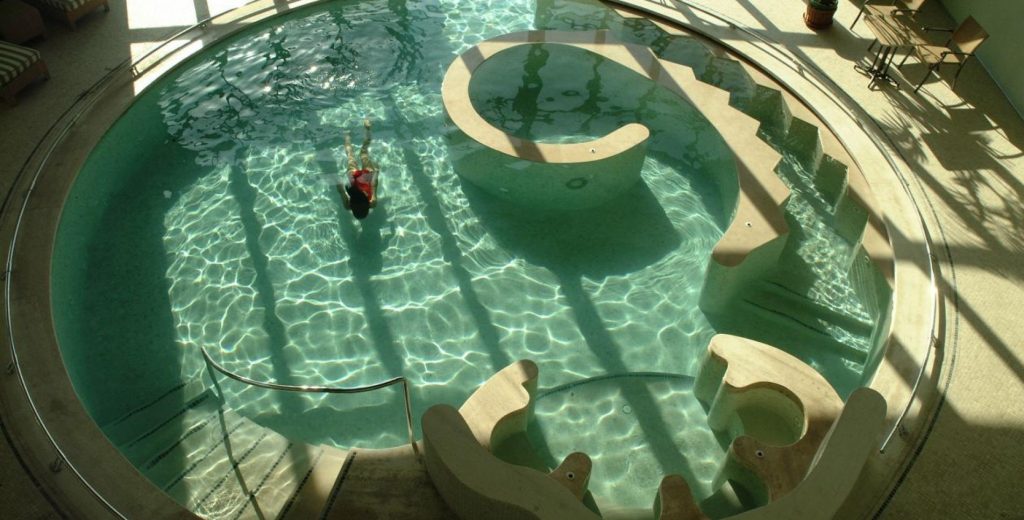 Known and utilized since the Etruscan period, in Roman times the spa resort of San Casciano dei Bagni, well connected to Rome by the Via Cassia, was able to boast that the Emperor Octavian Augustus was one of its most assiduous visitors. In the Middle Ages it gained a renewed vitality also as a result of the proximity to the Via Francigena, the important arterial road connecting France and Rome.

To this day, as one slips down into those small stone tanks in the middle of the countryside, far away from the everyday noise and hubbub, it feels as if time has stood still.

The spa resort of San Casciano dei Bagni is possibly the least well-known in Tuscany and, for this reason, it is highly recommended for the most demanding visitors: it is the ideal place to visit even during the winter and perfect for nighttime bathing since admission is free and it is always open.