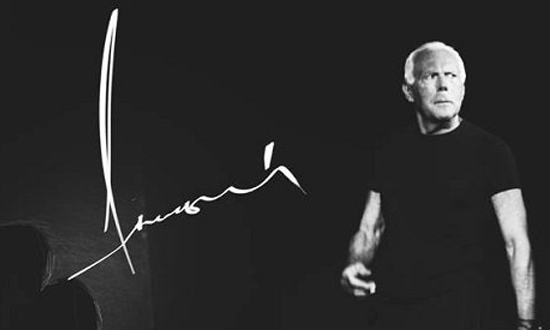 2015 is a decisive year for Giorgio Armani and for Milan, ‘his’ city, and the place that ,as the fashion designer told the Italian magazine Corriere Economia,“welcomed and understood me and that, with its contrasts and discreet silences, has long inspired me.”  In fact, this year the Maison Armani will be 40 years old, while Milan will be opening its doors to the Expo, the universal exhibition that, from May 1st to October 31st 2015, will host the biggest diet and nutrition event ever held.  What better occasion for inaugurating the Armani Silos, the fashion house’s archive-museum in which Armani has invested 50 million Euros, that will also be a photographic archive, an exhibition venue and an arts and culture center for scholars and lovers of fashion?  A place that Armani dreams will be like “my own all-white Tate Gallery “.

The idea of a museum is not a new one, in fact it dates back to 2000, when the Guggenheim Museum of New York dedicated a large traveling retrospective exhibition to the fashion designer that touched on Bilbao, Berlin, London, Rome, Tokyo and Shanghai, before coming to an end at the Trienniale in Milan.  Right from the start, Armani announced that the material in the exhibition would have a permanent home on via Bergognone 46, zona Tortona, in the fashion house’s headquarters, in an area designed by the Japanese archi-star Tadao Ando.  Right next-door to the Armani Theater, also designed by Tadao Ando, is the former Nestlé factory, an unused industrial building where the Museum will be housed.  The Museum of Culture of David Chipperfield, another great archi-star, is also being built on the same block : some synergies could well arise between the two neighbors in the light of the growing internationalization of their host city, where fashion, economics and culture are establishing increasingly solid ties.  This is demonstrated by another important inauguration, also scheduled for Spring 2015, in the southern part of Milan: the new head offices of the Prada Foundation, an institution which has been active in the culture and contemporary art sectors since 1995, and which this year is celebrating its twentieth anniversary.

The project, which has been entrusted to Dutch architect Rem Koolhaas, involves the reclamation and transformation of an early twentieth century building, located in Largo Isarco, between Viale Ripamonti and Corso Lodi, and includes the creation of a block dedicated to temporary exhibitions, an auditorium and a nine story tower used for a rotating display of the works already present in the Foundation’s permanent collection.  The exhibition spaces alone – existing and new – will occupy an area of 13,400 sq. meters, and will be the fruit of the linguistic hybridization so dear to the maison: so, not just art and fashion, but architecture, design, cinema, photography and music.  Moreover, the area will also host a section specially dedicated to the large-scale works and installations acquired by the Foundation over the last twenty years .

celebrities in Italy, Italian art, italian fashion, Made in Italy