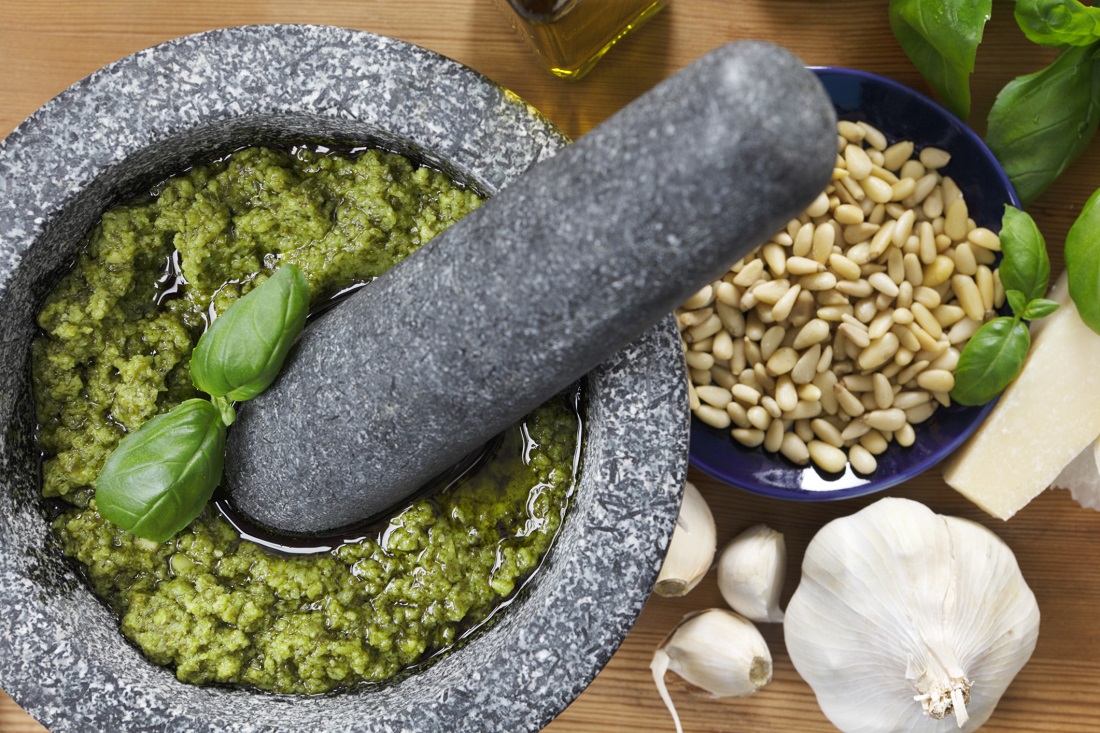 It’s official:  the best Genovese pesto in the world is made by Grandma Alfonsina.

Last April 29th, the fifth World Championship of Genovese Pesto was held in the breathtaking Ducal Palace in Genoa, Liguria.

Genovese pesto is a well-known condiment made from basil, pine nuts, parmesan cheese, and extravirgin olive oil, traditionally produced in Liguria (the northwest region of Italy, bordering the French riviera).

Countries from all over the world were represented in the 100 contestants: Canada, Finland, France, Germany, England, Ireland, Lebanon, Norway, Serbia, Spain, the United States, Sweden, and Switzerland.

All of them were armed with mortars and pestles, but those belonging to the 86-year-old oldest contestant and winner, Alfonsina Trucco, were truly special.  They had belonged to her grandmother, who is said to have used them to prepare pesto for Garibaldi, a politician and general considered to be the founding father of Italy.

Alfonsina is originally from Trefontane di Montaggio, on the outskirts of Genova.  It was there, working in Rosin, the old family restaurant, that she learned the specialty of making pesto.

All participants used the typical ingredients:  basil PDO(Protected Designation of Origin) from the Ligurian riviera; Italian pine nuts; parmigiano reggiano PDO; oil from Vessalico (Imperia, a town west of Genoa); fiore sardo PDO, one of the most well-known cheeses produced in Sardinia; sea salt from the salt pans of Trapani, the Sicilian city “of salt and sailing” .

It was all seasoned with extravirgin olive oil PDO from the Ligurian riviera, bottled by Frantoio Portofino, named after Portofino in the province of Genoa, often considered to be one of the most picturesque seaside villages in the world.

Portofino has always been loved by celebrities, intellectuals, and men of culture.

In 1884, Lord George Herbert, the fifth Count of Carnavon, was caught in a storm and sought shelter in the Portofino Bay.  Guy de Maupassant referred to it as a, “small village, that spreads like a crescent moon around this quiet basin.”

It is also a favorite destination for the international jet setter, thanks to the peace and privacy that the town provides for its inhabitants.  In 2009, Natalia Grosveno, duchess of Westminster, descendant of the great Russian poet Aleksandr Pushkin, wife of Gerald Grosvenor, and one of the godmothers of Prince William, decided to buy the slice of heaven with which she had become enamored:  the famous Piaggio Estate, isolated, difficult to reach, and surrounded by dense vegetation.