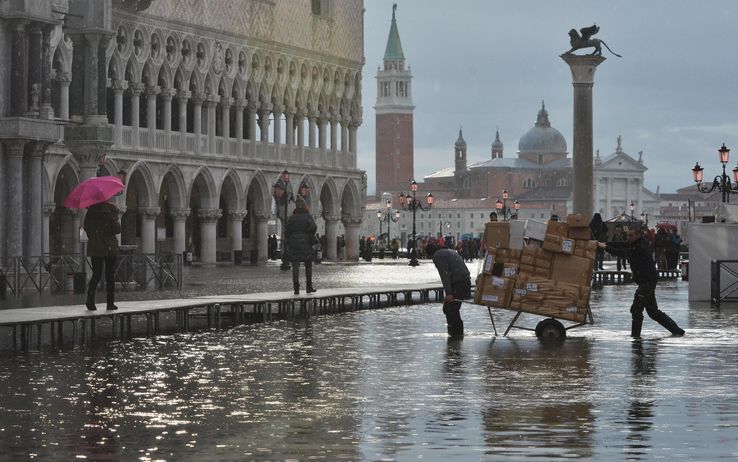 If you are venturing to Venice in December, a wonderfully festive time, you may get more excitement than you bargained for.

Known worldwide for its villas, doges, exquisite blown glass, festivals and, yes, the legendary canals, Venice also has achieved a certain notoriety for its periodic flooding, during events known as acqua alta, or “high water”.

As Venice attractions go, the acqua alta occurrences are hard to include on a scheduled tour, since they are subject to the vicissitudes of many factors, including lunar phases, tidal flows and scirocco winds.

The acqua alta was first reported, late in the 8th century, by “Paul the Deacon”, a Benedictine monk and a noted historian, who wrote of major flooding along the Adriatic coast, including the Venice Lagoon, that had happened some 200 years earlier.

In modern times, the acqua alta event of 1966 made that Venice November the wettest ever, with large portions of the city submerged under a full meter of seawater!

Travelers packing for a fall or winter trip to Venice often ask if there is any danger, or if it’s necessary to bring hip-boots or waders, and the answer, basically, is “no”. For a trip to Venice rubber boots and other high-water paraphernalia are too heavy and bulky to lug around, and precautions have been taken to minimize potential hazards, and local stores carry any gear that may be needed.

The acqua alta phenomena that cause this Venice flooding are typically short-lived (waters usually recede within a few hours), and most of the city remains dry during these events, anyway.

All cities with major water features have contingency plans in place to deal with many eventualities, and Venice is no exception. Raised plank walkways and protective barriers are quickly erected (and dismantled) by city workers when high water is present along major thoroughfares, and there is a citywide system of sirens that will sound when “very intense” or “exceptional” high water is expected.

Where To Stay In Venice

It doesn’t matter which Venice attractions visitors have come for, or whether-or-not the water is high, one of the city’s best lodging choices, available through Villeinitalia, is the Maria Formosa, a splendid two-bedroom apartment that commands a view of the delightful Campo Santa Maria Formosa.

Set in a fine historic building, and infused with a venerable old-world ambiance, the Maria Formosa also caters to modern guests, accommodating up to four people with amenities that include central heating, TV, a microwave oven, and private laundry facilities.

Other highly regarded villas to consider when visiting Venice include the luxurious Ca Lucia, and the equally charming Carampane.

The Ca Lucia, situated in the Cannaregio district, is a three-bedroom gem, with a Jacuzzi, satellite TV, a well-appointed modern kitchen, and air conditioning. This villa is just a short walk from the Piazza San Marco, and the Cannaregio district offers strollers an abundance of quaint shops and homey restaurants and taverns.

The recently renovated and furnished Carampane, complete with its own peaceful and private garden, is a quaint two-bedroom apartment that is only steps away from the lively markets in the Rialto Bridge area. Guests can relax in the garden, under the umbrellas, after an adventurous day in Venice.