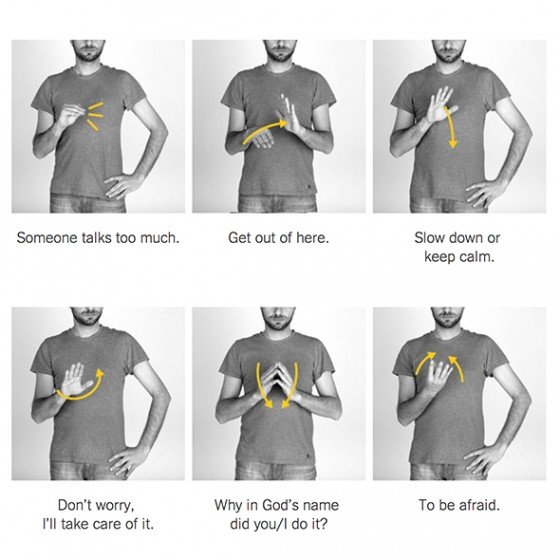 Italians have two languages, and the second does not use words: it is all in the Italian gestures and mimicry that have made Italians famous all over the world.

Just think of the joyful image of Roberto Benigni who won an Oscar for “Life Is Beautiful“: what the actor’s body and face were able to get across in those

moments said much more than lots of words. For a start, it told us that that man is, without a doubt, Italian, because it is almost impossible to find an Italian without mimicry.

According to an article in “The Guardian” last summer, research carried out by Prof. Isabella Poggi of Roma Tre University shows that Italians use about 250 gestures every day to communicate a vocabulary whose breadth and complexity is comparable to that of sign language for the hearing-impaired.

It’s a language in its own right that is becoming more and more a banner for Made in Italy. And like every product

worthy of the name Made in Italy, it is all the rage abroad, especially since the Sicilian film director, Luca Vullo, author of the documentary “The Voice of the Body“, started holding workshops on gestures in English universities.

These workshops are based on the documentary (which is shown before the “practical lesson”) and are attended by people of all ages, not just students and not just people studying Italian. Vullo himself points this out at Ville in Italy, and explains why:

“This extraordinary ability to communicate that we Italians have“, he says, “fascinates foreigners, who are often physically inhibited compared to us. To an Italian, a gesture is not just something that accompanies a word, or that only has an ornamental function: it has a meaning of its own.

If an Italian goes into a bar and wants a coffee, he can make himself understood without speaking in a way that is almost impossible for non-Italians. We manage better than others to communicate our feelings through our bodies, maybe because during the course of history we have been invaded many times and have always lived with the urgent need to make ourselves understood as quickly as possible.”

a way of reducing distances; they kindle empathy and warmth, invoke the lightness and poetry of life in Italian streets and squares.

This is shown by the fact that Luca is preparing to go round the world with his workshop: he is receiving invitations from America, Australia, Norway, from universities, cultural centres and associations linked to Italian culture and traditions… And after the lesson (which in any case is difficult to understand fully, because Italian gestures, like every genuine original product, are unique and inimitable), there is nothing left to do but make a trip to Italy to get some practice!