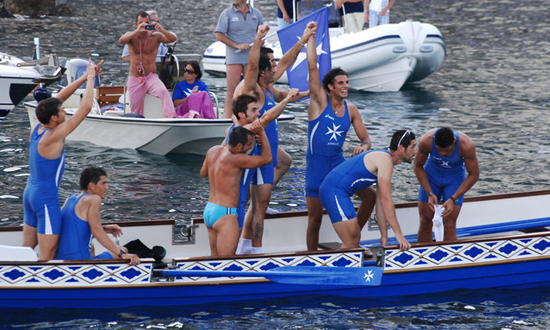 The Regatta of the Ancient Maritime Republics

In fact, the Regatta (or “Palio”) recalls the ancient rivalry between the four Italian Maritime Republics – Genoa, Venice, Pisa and Amalfi – whose merchants and fleets dominated the whole of the Mediterranean Sea between the 10th and the 13th centuries.

Amalfi was the first maritime republic. By the 10th century, the merchants of Amalfi had already managed to seize the trade monopoly in the Mediterranean area from the Arabs, establishing a number of trading bases in southern Italy, Africa and the Middle East (in Turkey, Syria, Egypt), setting up the first code of maritime law, the so-called Tavole amalfitane (Amalfi tables). However, Amalfi’s power was short-lived: the city was occupied by the Normans(1076), then it was conquered and plundered by its rival Pisa (1135) and ceased to be a republic in the early years of the 11th century.

Pisa was the second maritime republic. It fought for years against the Muslims who, from the neighboring islands of Sardinia and Corsica, made many attempts to take control of the Tyrrhenian Coast. The city managed to establish settlements in the near East and the Tyrrhenian area, but then entered into a conflict with Genoa (its former ally during the fight against the Muslims), for two centuries. This struggle ended with the battle of Meloria in 1284 when Pisa was defeated.

The third republic was Genoa which, from the 10th century, became famous for the Compagna, a large association of merchants and seamen that governed the city and managed the Council’s assets. After the battle against Pisa it became the sole master of the Tyrrhenian Sea and the western Mediterranean. But the rivalry with Venice marked its end in the 14th century: after almost two hundred years of war, Genoa was forced to recognize the supremacy of Venice.

The longest survivor was Venice, the fourth maritime republic. Its origins date back to the 5 th century when the residents of the inland areas of Veneto sought refuge on the lagoon in order to escape the Barbarian invasions . Until the 8 th century the city was under Byzantine rule, then subsequently controlled by an oligarchic government it developed its wealth and influence until, in 1200, it reached the height of its power, dominating trade between the Mediterranean and the East.

It kept its independence until the mid-1800s, when it was annexed to the Lombardo Veneto kingdom by the Austro-Hungarian empire.

The Regatta of the Ancient Maritime Republics is a race involving galleons rowed by crews of eight oarsmen from the cities of Amalfi, Genoa, Pisa and Venice . The event began soon after the end of the Second World War (the first regatta was held in Pisa on July 1 st 1955), and is organized in turn by the four cities at the beginning of every summer (June 7 th is Venice’s turn).

Four crews take part in the competition, each of which consist of 8 oarsmen and a helmsman. The boats all have to be built according to the same structural parameters. In order to guarantee greater efficiency and make them lighter in the water, today the boats, which used to be built in wood, are made of fiberglass.

Each craft is identified by its color and figurehead, i.e. wooden sculptures (now also made of fiberglass) positioned on the bow with the animal symbol of each city. Amalfi’s boat is sky blue and has a winged horse, Genoa’s boat is white and has a dragon (in honor of Saint George, the city’s patron saint), Pisa’s boat is red and has an eagle (symbolizing the ancient ties between the Republic of Pisa and the Holy Roman Empire) and Venice’s is green with a winged lion (in reference to Saint Mark the Evangelist, the city’s patron saint).

The Regatta is held over a distance of two kilometers which differs according to the venue: in Amalfi the race is held along the coast in the Tyrrhenian Sea, in Genoa in the dock of the port on the Ligurian Sea, in Pisa they race against the current on the river Arno and in Venice they row on the Lagoon.

The city that wins the Regatta receives a gold and silver trophy representing a galleon that is rowed with oars (like the kind used for the race) supported by four seahorses, underneath which are the coats-of-arms of the four Maritime Republics. The winner keeps it for a year until the four cities vie for the prize again at the next Regatta. Every year a medal is placed on the base of the trophy with the symbol of the city that won the Regatta; so there is a medal for every edition that has been held.

The Venetian edition of the regatta, which is 60 years old this year, will once again be preceded by the famous historical procession of the Ancient Italian Maritime Republics: a parade of flags and banners accompanied by drums and clarions. With a total of 320 participants, a triumph of music, color and historical costumes, this has become one of the most popular elements of the whole event and is greatly appreciated by the public. Each city gets a chance to present its own history and the role it played on the waters of the Italian seas.

For tourists this is a unique opportunity to fully “immerse” themselves in the beauties of Italy.

Places to stay in Pisa, Tuscany

Places to stay in Liguria (Genoa)

Places to stay in Venice and Veneto