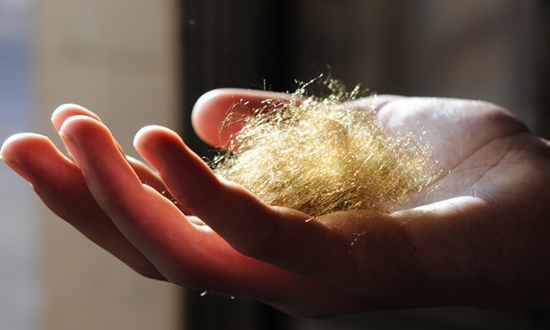 Every year, on the first moon of May, a woman would immerse herself in the sea to gather this gold and use it to make a yarn with which she would weave incredible fabrics. It sounds like a myth but it actually still happens in Italy today: this woman is called Chiara Vigo and she lives on the island of Sant’Antioco, the biggest of the islands of Sardinia, to the south west, around eighty kilometers from Cagliari.

According to historians, the small town of Sant’Antioco is the most ancient town in Sardinia, probably founded by the Phoenicians (the inhabitants of present day Lebanon) in the VII century B.C. It was probably as a result of Phoenician domination that byssus arrived on this island which is considered to be its ‘kingdom’. Byssus is actually a particularly valuable fiber of animal origin, produced by a large mollusk known as the noble pen shell (the scientific name is Pinna Nobilis) that grows at a marine depth of around three meters on the bed of the Mediterranean Sea. When it feeds, this mollusk secretes a special filament that, upon contact with the sea water, solidifies and turns into silk. Its dark amber color changes when it is exposed to the light where the rays of the sun turns it gold.

In Sant’Antioco there is a true tradition of weaving byssus which here is considered to be sacred, to such a degree that there are byssus experts or maestros, who pass on their role through a special handing over “ceremony”. A few years ago, Maria Maddalena, Chiara’s grandmother, got into the sea at sunset and, wearing her silk dress, walked along the trail of the setting sun, then returned to shore and, after speaking the ritual words, opened her clenched fist into her granddaughter’s hands and gave her a ring, a tiny circle of gold. This was the water oath with which Chiara promised her grandmother that she would carry on this art according to the laws of the Craft which, for example, prohibit the use of byssus for personal enrichment: byssus is the gold of the sea and, just like the sea, it must belong to everyone.

From that moment, Chiara Vigo became the new byssus maestro. Her home-workshop is in Sant’Antioco, here is the wooden loom with which she weaves and spins, as she recites a long prayer. It is a typical loom of Sant’Antioco, with the legs made from the trunk of an olive tree and the sley made of oleander wood, like the spindle, which will never become worm-eaten because oleander wood is poisonous.

In the Middle Ages, byssus was used to make the cloaks of popes and kings. In1868, two thousand seven hundred pen shells were used to make the wedding cloak, entirely made of byssus, for the marriage of Maria Pia of Savoy to the king of Portugal.

Whilst in the past it was possible to obtain great quantities of the yarn of an appreciable length, useful for realizing fabrics entirely worked by warp and weft in byssus, things have changed today, also thanks to the sensitivity of Chiara, who has managed to reconcile historical memory and tradition with respect for nature. By studying the island’s eco-system, Chiara discovered that it is only possible to extract the pen shells from the water without traumatizing the animal at a specific time of the year. In fact, on the first moon of May, due to the particular climatic conditions, the mud on the bed of the Lagoon softens and it is therefore possible to extract the animal, cut its silk, and put it back without damaging it.

The wonderful articles woven by Chiara’s grandmother are distributed throughout a number of museums in Europe, including Madrid, which also contains the cloak she made for another Maria Pia of Savoy, in 1942.

byssus is the gold of the sea and, just like the sea, it must belong to everyone.

However, to see Chiara’s work it is enough to enter the town of Sant’Antioco from the main street: many of the stores have drapes made of a thousand fine threads, on which a pair of peacocks has been woven, or other traditional patterns – these are all her work. The whole island talks about Chiara who also uses natural methods to create her colors, availing herself of the whole landscape: stones, plants, mollusks, earth and sea.

Among the wonderful beaches that tell us about her, her grandmother and their extraordinary art, is Cala Lunga, which also features the ruins of a Phoenician construction, where today the fishermen go to cook their fish. From here, following a series of curves that drop down to the sea, and beyond an ancient watchtower, is the small Turri beach where Maria Maddalena bestowed the byssus art upon Chiara, and where she used to bathe even at the age of eighty.

ancient watchtower, is the small Turri beach where Maria Maddalena bestowed the byssus

On the other side of the island is the little town of Calasetta (literally silk creek): this is where Chiara’s family, which has ancient origins, comes from: political deportees who traveled from Spain to Madagascar, between the 18th and 19th centuries they arrived in Carloforte, on the neighboring island of San Pietro, famous for its high rocky coasts and crystal clear seas, which is around 30 minutes away from Calasetta by ferry.