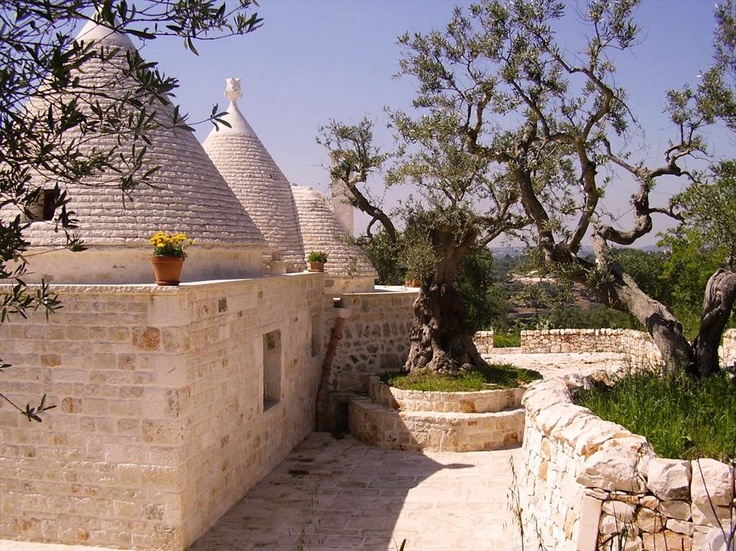 The Valle d’Itria is particularly famous for its “Trulli” and a whole district of the city of Alberobello, in the province of Bari, is filled with these constructions, earning itself the name of the “Capital of the Trulli”.

Other areas of particular importance are the countryside around Locorotondo (Bari), Martina Franca (Taranto), Cisternino, Ostuni, Fasano and Ceglie Messapica (Brindisi), as well as the areas of Monopoli and Polignano a Mare (Bari).

It is difficult to establish the exact origins of the “trulli”.  Some scholars believe that they were introduced by the Hittites before the birth of Christ or by other civilizations, because similar constructions have been found in Mesopotamia, Egypt and Crete.

Others believe that the local farmers learned how to build the trulli themselves using the blocks of limestone that are plentiful in that area.

It appears that the historical reason for using the dry stone masonry technique to build the “trulli” was due to an abuse of power by feudal landlords who were able to remove farmers from the land whenever they liked, without recognizing any of their rights, in particular that of “citizen”.

At the beginning of the 17th century, various families settled in the area of Alberobello, inside the “trulli” built by the farmers: a regular community was formed, under the rule of Count Giangirolamo Acquaviva d’Aragona, in

open violation of the rule forbidding feudal landlords from building new cities without the king’s permission.

According to tradition, when royal inspections were made, the Count had the dry dwellings knocked down during the night and cleared out the inhabitants, rebuilding them just as quickly as soon as the danger had passed.

The Trulli of Alberobello have been declared a UNESCO World Heritage Site.

It is a wonderful experience to travel along the State Road 172, also known as the “Strada dei Trulli” from Casamassima (in the province of Bari) to Taranto: for 85 kilometers it is possible to admire a landscape dotted with these timeless, unique constructions.

Many “trulli” are still inhabited to this day.  Some of them have been superbly restored to create delightful residences.  They are often bought or rented to be used as summer homes where people can enjoy a relaxing vacation surrounded by nature.

Italian culture, Made in Italy, tours of Italy