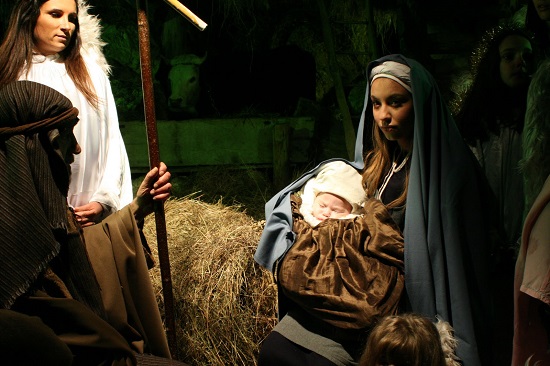 In the 1200’s, excited after seeing the birthplace of Jesus Christ, St. Francis of Assisi held a reenactment of the Christmas miracle in a cave outside of Greccio, Italy. With the Pope’s blessing, nativity scenes, both static and live, became a cherished part of the Italian – and worldwide – Christmas celebration. Presepe, or Presepi Viventi, are still set up and reenacted all throughout Italy.

Most churches and families put up their mangers and nativity scenes on December 8, the feast of the Immaculate Conception. But if you see an empty crib in the manger before Christmas Eve, that’s because tradition holds that the Christ child does not appear until December 24th. Many living nativity pageants are held beginning in the middle of December through January 6th, the day the three wise men arrived to present their gifts to Jesus. Here are some of the most famous places to view traditional Italian nativity scenes.In Greccio, the original living nativity is recreated every year in the same place where St. Francis started the tradition. The tiny town in Lazio, north of Rome, also has a library dedicated to the history of the nativity.

Starting in the 1980’s, the Vatican has erected a manger and nativity in St. Peter’s Square. The Pope also blesses cribs for nativity scenes all over in a special ceremony started by Pope John Paul II. Rome is also home to a museum dedicated to the nativity, with figurines of all sorts of materials from all over the world.

The Presepe in Sicily traditionally goes beyond just a manger scene – often an entire village is recreated! In live presentations, these traditional villages often include artisans recreating trades from around the 18th century.

Naples is particularly famous for its static nativity scenes. Hundreds are put up around the city, many with many intricately carved figurines, including animals, villagers and additional scenery. Don’t forget the angels and other celestial worshippers! Several antique manger scenes can also be found in the museum in Naples dedicated to the Presepe.

Like Naples, Genoa was also a center of production of carved figurines for the Christmas scenes. Some nativity scenes in the city are open to visitors year round! Also, walking tours are available to make sure you see all of the historically important displays.

Wherever your Italian Christmas holiday takes you, be sure to visit at least a few different live and still nativity scenes. There are so many different styles, from small, humble mangers to baroque, expansive scenes with entire villages. It’s an important Christmas tradition that will continue for centuries more in Italy, the country where it was started.