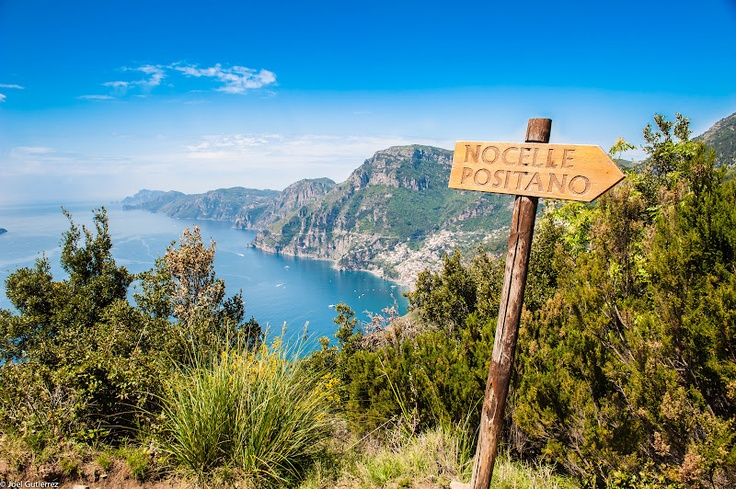 True to its name, the Sentiegro degli Dei is a magnificent walk riddled with spectacular sceneries and views. You can begin the walk either from Bomerano in Agerola or from Praiano and follow white and red road signs labelled 02. The route that takes you up a long flight of carved steps which end at the Colle Serra Pass 580 meters above sea level.

The Convent of San Domenico is also clearly visible after the Colle Serra Pass where the scenery changes from scattered scrubs to green sheep and goats’ pasture dotted with holm-oaks, heather, rosemary, and arbutus.

You will need to go over a few tortuous ascents and descents before reaching the Vallone Grarelle from where you can catch a breathtaking panorama view of the town of Nocelle in Positano.

Lying above the village of Positano along the Amalfi coast is the Villa Oliviero from where you can catch an excellent view of the entire coast stretching as far as Praiano headland. The beach is just 15 minutes walk from Villa Oliviero although most guests are usually contented with the villa’s 10m by 10m private swimming pool or outdoor Jacuzzi hot tubs.

Villa Capodimonte is located in the scenic town of Positano, famously known as the pearl of Amalfi. The villa provides panoramic views of Positano’s colourful houses on the hillsides and the seashore. It has a large car park, living room areas furnished in exotic Mediterranean style, and a fitness area among many other facilities.

Located in the beautiful Positano town along the Amalfi coast, the Dimora Vescovile is one of the most attractive residential facilities along this coastline. It is an old villa dating back to the 1700s with a unique view of the bay and the entire town.

The Costa degli Dei villa is located above the sea in Praiano from where guests can get an unhindered view of the Amalfi coastline. It has a large car park, beautiful terrace, private swimming pool, and everything you need to feel at home.

Catch the perfect view of the sea and the mountainside at Il Corallo villa in Praiano. From the villa’s terrace, the Conca dei Marini’s Emarald Grotto and the coast’s beautiful bays are clearly visible. It has all the facilities you need including satellite TV, ‘al fresco’ dining areas, WIFI connection, and a sun-bathing area among others.