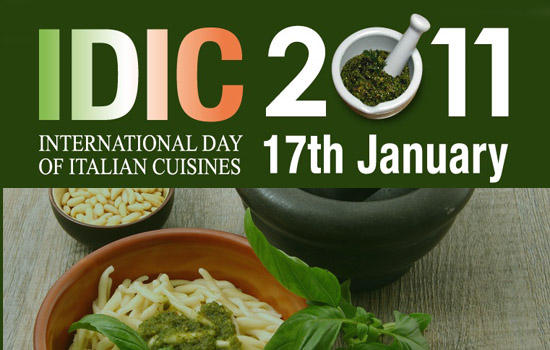 Posted at 00:00h in Events, Food and wine by allyou

“A wave of Italian flavor will invest hundreds of restaurants all over the world with one of Italy’s most typical dishes: Pesto alla Genovese, the best-loved uncooked sauce in the world, which will be served for both lunch and supper.”

This is how Mario Caramella describes the initiative he is organizing as president of the Gruppo Virtuale di Chef Italiani (GVCI) [Virtual Group of Italian Chefs], now in its fourth edition (previous editions have been dedicated to “Ragù alla Bolognese”, “Risotto alla Milanese” and pasta “alla Carbonara”).

GVCI is a network that was created to “help Italian chefs communicate with other countries by giving them a kind of home, a virtual bar where everyone can ‘stop by’ and exchange ideas, experiences and opinions”. Their website contains a list of all the restaurants taking part in the initiative.

The IDIC 2011 was launched in Genoa on 13th January and, simultaneously (with a video-conference) in New York and Singapore, with ‘twin’ events: in New York, Italian chefs from all over the world, guided by Massimiliano Alajamo gathered for a preview event for the industry and media, hosted by Cesare Casella, Dean of the Italian Culinary Academy and a senior member of itchefs-GVCI.

In Singapore, the Guest Master Chef, Massimo Bottura, was the guest of the Forlino restaurant. Forlino is Mario Caramella’s latest “baby” which he opened at the beginning of 2011, after many years of experience as a chef at the Bali Italian restaurant.

How did the idea come about of having a day dedicated to Italian cuisine around the world?

This initiative was developed because some Italian dishes more than others get ‘mistreated’ in other countries due to the mistakes made by the professionals (obviously non-Italians) who learned the recipes at school or from rather inaccurate books. Our mission is to bring a bit of order to the classical Italian recipes used abroad and we use this Day to rehabilitate the dishes which have been most ill-treated and spoiled, educating people about authentic quality.

Does even “Pesto” get mistreated?

Of all the dishes to which this Day is dedicated, “Pesto” is probably the one that gets off the best. More than anything it is used in the wrong ways: instead of being mixed with pasta it is put on chicken or mixed with soya, or wasabi, there’s too much “creativity”.

What I do, when I am preparing a recipe for another country, is to make it simpler than the traditional recipe, although it should still be the same. For example, I do not put any “Pecorino” cheese and walnuts in my “Pesto”, and I say to use any type of garlic (if it is not possible to find Vessalico garlic from Imperia). The important thing is not to buy garlic that has already been peeled and has been kept in plastic bags, possibly in a warm environment, because when you come to use it, it will have fermented: it is truly dreadful and makes your breath really stink!

I also suggest adding green beans and boiled potatoes when you mixed the “pesto” with the pasta, but you must avoid cooking the “pesto” because it is like mayonnaise, if you cook it, you ruin it. Obviously, this is my own recipe. On the website we put the traditional recipe, to which variations can be made.

What else shouldn’t we do?

In some books I have found recipes for risotto using corned tongue and tomato sauce, that’s heresy! Like the idea of making Carbonara with cream, mushrooms and chicken. But the dish that gets the most ill-treatment is definitely the Bolognese sauce.

For example, not many people know that you should make it with milk. I didn’t even know it myself because, in Italy, I worked in Milan where Tagliatelle alla Bolognese is not a dish you eat at a restaurant, Ragù is considered to be a simple minced meat sauce. If you taste a Bolognese sauce prepared following the proper recipe, which we researched for another one of our Italian Cuisine Days, you’ll never tire of eating it!

But you have to be very precise: the Italian Cookery Academy, for example, says that you can choose whether to use red or white wine…but how is that possible? They are two different products, the instructions must be clear!