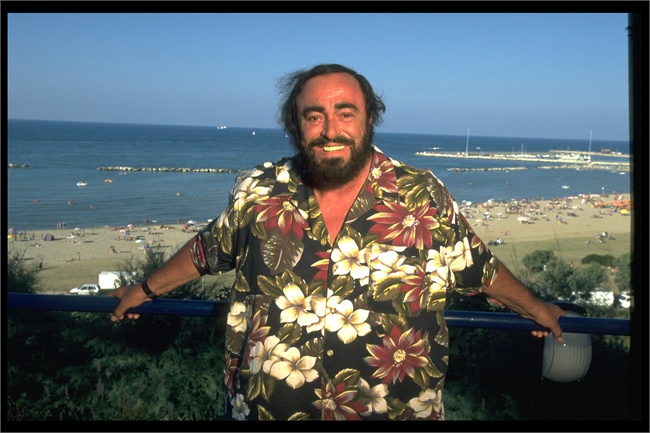 An interview with Sante De Sanctis, the Roman chef who lives and works in Stuttgart, extolling the virtues of Italian cuisine in his restaurant as well as by writing books and making television appearances. His stories, as well as his dishes, demonstrate his great love of Rome and, in particular, one of the city’s most characteristic districts, Testaccio.
He reveals exclusively to “Emotions in Italy” the most thrilling moment of his life: the day maestro Pavarotti came into his kitchen and starting to sing with him …

Although Italy does not always have an impeccable image abroad, there is one thing that never lets us down us and actually enhances the international profile of our country: gastronomy. These are the words of Sante de Sanctis, a Roman chef, the owner and manager of the San Pietro Gastro Restaurant in Stuttgart, as well as the author of cookery books and a well-loved TV chef:

“Food remains our specialty, neither floods nor mountains of rubbish, nor the controversial behavior of our politicians can ever tarnish the pleasure

of sitting down to a purely Italian meal, because only we are able to combine technique with a background of thousands of years of culture. I think I can say this because I have traveled to 70 different countries!”

In fact, in 1994, De Sanctis, who has lived in Germany since’89, “dropped everything” for 2 years to travel around the world on the cruise ship Vistafyord, daughter of Queen Elisabeth II and twin of Sagafyord. De Sanctis explains:

“The Mediterranean is a microcosm uniting many different countries, making Mediterranean cuisine a world in itself, with Italy being its most worthy representative since it is totally surrounded by this sea. Our cuisine is based on some fundamental elements that have existed for centuries and run like a hotline through all twenty regions of Italy.

Some have been imported, like spices, then there is olive oil, garlic and onion, asparagus, artichokes, wheat, rice and coarse salt. Plus walnuts, wild boar, mouflon, lamb and goat …Even though they are surrounded by the sea, Italians have always loved products that come from the inland. Initially they only resorted to seafood products in times of necessity. Over time, however, we have moved closer to the sea with great love and enthusiasm.

In 1990, the football World Cup (which was held in Italy), was officially presented in Stuttgart at the Hotel Intercontinental: Sante De Sanctis was working there as a chef, at the time, in the Italian restaurant “La piazzetta”. He has one very special memory of that period, a secret he reveals for the first time to our blog:

“Maestro Luciano Pavarotti was in town to present his collection of oil paintings. On the evening of the France-Italy match he came to have a meal at the restaurant I was working in. While I was serving, wearing my chef’s hat, I went up to him to ask for his autograph. He immediately wanted to know how the match was going then he asked me about my work and I invited him into the kitchen.

Together we prepared “Spaghetti alla Pavarotti”, with slices of tomato cooked in garlic, basil, chilli pepper and sautéd with Parmesan. He insisted on using tinned peeled tomatoes, straining them and chopping them into pieces, because he said that, here in Germany, they have more flavor than fresh tomatoes.”

But the real secret ingredient was something else. De Sanctis continues: “the Maestro was convinced that you have to ‘sing’ to the spaghetti as you toss it in the pan, so we put on an amazing two man show in the kitchen. That moment will remain in my heart forever. I have never told anyone about it until now, it was one of the highlights of my life. I think that Pavarotti enjoyed himself a lot too, because the next day his manager brought me a poster of one of his paintings, personally signed by the maestro, thanking me for the great gift I had given him the previous evening.”

Flavors of Home, in Rome

Sante was born in one of the most popular and colorful areas of Rome, situated between Testaccio and Garbatella, even though his memories are mainly linked to the Alberone district where his grandparents lived. Every day, on his way back from catering college, he stopped off to eat with them, and that world is engraved in his memory:

“My grandmother, Anna, originally came from Le Marche. She moved to Rome after falling in love with my grandfather Evelino. She worked as a cook for an aristocratic architect. She prepared exquisite high calorie dishes like “Saltimbocca alla Romana”

One of the best moments of my day was when I met her at the market with her shopping basket on wheels, and could enjoy watching her haggle and argue about the price of the ingredients for her “Saltimbocca”: the veal cutlets, the raw ham (she wanted the more mature Tuscan variety), the butter (although she used very little butter because she hated animal fats), the lemon, the wine and the processed cheese slices to be melted on a low heat…

Another fundamental ingredient for this dish was the sage, which she took directly from the plants she grew on her balcony (fertilizing them with lemon and coffee grounds). My grandmother was also particularly good at making homemade pasta, she used just a few eggs and mixed everything together well with warm water and oil. The pastry was as soft as silk and didn’t break.”

But before his grandmother and catering school, Sante had another exceptional teacher: his father.

“My father came from quite a poor family. They were fishermen even though they lived in village surrounded by scrubland, Ceccano, and cooked a lot of meat. He taught me how to enrich a “poor” dish by using herbs which make the food fresh and spicy, like his magnificent Ciociaria-style rabbit. But the very first thing he taught me to cook was “Pinolata”.

Rome is full of pine trees and pine kernels: we used to pick them up and back home, in the evening, we cooked “Pinolata” with 4 spoonfuls of sugar, 2 spoonfuls of water and 1 spoonful of white wine vinegar, cooling it on the travertine terrace.”