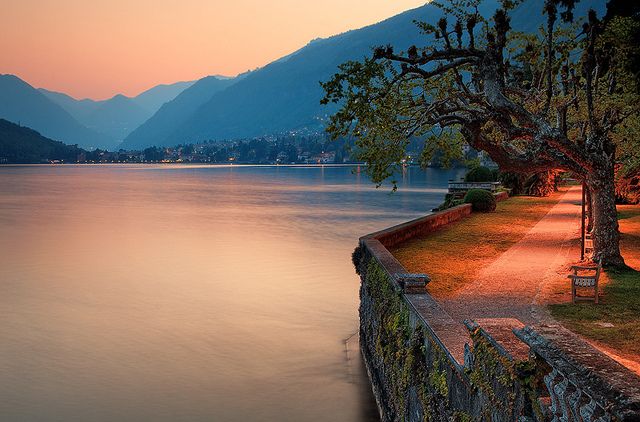 12 Feb 2014 Lake Como, the waters of passion: from Clooney to Bellini

When someone mentions Lake Como we immediately think of George Clooney: ever since the Hollywood star bought Villa Oleandra he has come to symbolize this wonderful place, probably fulfilling the dreams of many of his colleagues, actors and directors, who have filmed on the shores of the lake and later become habitués of the area.

People like Robert De Niro or Alfred Hitchcock who shot his first feature movie here, “The Pleasure Garden”, in which Patsy, a chorus girl at the Pleasure

Garden music hall in London, and Levett, spend their honeymoon on the lake.

And in 2010 the Hollywood actress Emily Blunt rented the historic steamboat “Concordia” to celebrate her marriage to John Krasinski.  In fact, above all, Lake Como is a place filled with passionate stories: many of which took place here, long before the arrival of cinema.

Romantic, tragic, clandestine stories, often linked to the many beautiful villas to be found by the side of the lake.  Let’s take a look at some of them, following an atmospheric, romantic itinerary.

Villa Saporiti La Rotonda was chosen by Napoleon Bonaparte for his two sisters, Elisa and Pauline, on the occasion of their marriages to (respectively) the former Prince Felice Baciocchi and General Victor Emanuel Le Clerc.

At the beginning of the XIX century, Caroline of Brunswick, Princess of Wales, wife of the future King George IV of England, also stayed at Villa La Rotonda, to escape from her husband after being accused of excessively libertine behavior.  Brunswick had the first carriageable road built along the side of Lake Como, from Grumello to the entrance arch of Villa d’Este: the Strada Statale Regina.

Along this road we can also find Villa Passalacqua, where Vincenzo Bellini, the famous composer of “La Norma” often stayed.

By chance, Ferdinando Turina, the husband of Bellini’s lover, Giuditta, rented Villa Salterio, right next door to Villa Passalacqua: their love story involved many moments of passion on the banks of the lake but, in time, it faded due to Bellini’s frequent absences as he traveled around the great cities of Europe, finally coming to an end when Turina discovered his wife’s adulterous relationship and repudiated her, leaving her in disgrace.

Bellini used to travel in the company of his muse, the opera singer Giuditta Pasta, who bought Villa Roccabruna, situated on the banks of the lake right opposite Villa Passalacqua, in 1827, renaming it Villa La Roda.  From the dockyard, Bellini sailed over to Villa La Roda to meet Giuditta Pasta, with whose help he composed “La Norma” and “La Sonnambula”.

It is said that, in order to let Bellini know that she was in the villa, the singer used to light a candle and place it in a window facing the lake.  Villa La Roda is also mentioned by Gustave Flaubert, along with Villa Taglioni: these two residences were important cultural salons where the two most famous artistes of the Romantic period lived (Pasta and Maria Taglioni, considered by scholars to be the first ballerina of the romantic era).

Another composer, Franz Liszt, was deeply fascinated by Villa Mezi d’Eril in Bellagio. He ran away to Italy in 1835 with his lover, the noblewoman Madame d’Agoult, who left her husband for him.  Liszt loved walking along the spectacular avenue of plane trees at Villa Melzi and listening to readings of his beloved Divine Comedy near the great sculpture of Dante and Beatrice.

Another villa mentioned by Flaubert, as well as his fellow countryman, Stendhal, is Villa Carlotta in Tremezzo: sold in 1843 to Princess Marianne of the Netherlands, the daughter of King William Frederick, Count of Nassau, wife of Albert of Prussia, the villa was given to her daughter Charlotte when she married Grand Duke Georg of Saxe-Meiningen, whose interest in botany led to the expansion of the gardens and the stunning wealth of tree species to be found there.