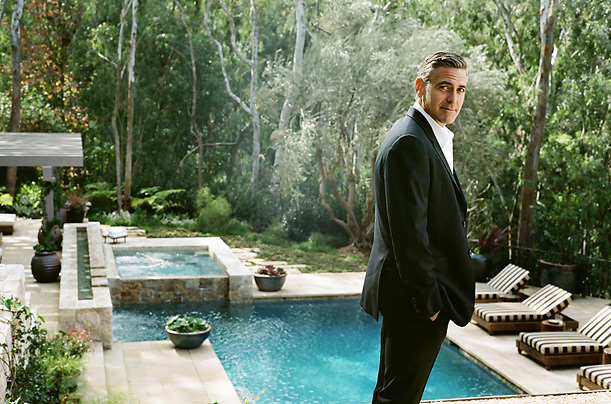 Who wouldn’t mind living in an Italian Villa? Whenever you see pictures of villas in Italy they appear to be relaxing, tasteful escapes from the real world. Therefore, it comes as no surprise that international celebrities have decided luxury villas in Italy make excellent places to own a home.

You probably already knew George Clooney had a villa in Italy since part of the movie Oceans 12 was filmed there. It’s located on Lake Como, in a small community in Laglio, Italy. He spends time at Villa Oleandra each year since 2002 when he purchased it. He came close to leaving it when the town considered adding parking lots so fans had a place from which to gawk at his Italian Villa. His threat to leave, however, brought an end to that residential upgrade in a hurry. Next time you’re out on Lake Como, you might run across George, but don’t stop with him. There are many other celebrities in Italy to snap pictures of.

Yep, another Ocean’s 11 alumnus decided to pick up property in Italy – Angelina’s partner Brad Pitt. Back in 2010 the two megastars dropped $40 million on a massive Italian Villa in the Italian hills of Valpolicella, near Venice. With 18,000 square feet and 15 bedrooms, the couple can continue to bring children into their family, especially since the mansion boasts seven bathrooms, two swimming pools, and a movie theater. It was rumored they were going to use George’s place for their wedding, but it looks like they can now host their nuptials at their Italian Villa.

The Police front man has a lavish estate in Tuscany, a 16th century villa complete with exotic gardens and swimming pool – all of which he had renovated. He produces his own olive oil, wine and honey from this estate. But that’s just one of his villas in Italy; he’s rumored to have another somewhere on Lake Como, making him another one of the many celebrities in Lake Como. Wonder if he and George ever hang out?

Leo picked up a loft apartment in 2011 becoming a neighbor of the Jolie-Pitts. He was reported to have been seen courting his former girlfriend, Blake Lively, while in Verona. Well, seeing as he actually has Italian roots, picking up property in Italy probably just made sense.

Supposedly, George Lucas spent around $15 million to buy and restore a 16th century convent in Passignano sul Trasimeno, in Umbria, Italy. What started out as a Capuchin convent for monks has now been transformed into a luxury villa with a billiard room, swimming pool and spa.

The British actress picked herself up a 500 year-old castle in, Lecce, Puglia after promoting her movie, “The Queen” (perhaps we should have seen that coming.) Apparently it’s quite the fixer-upper, however, so she won’t be living there in the near future. Instead, after spending close to $1.2 million to buy the place, she’ll be pouring money into renovations for a while.

Virgin CEO, and spaceship entrepreneur, Richard Branson has a luxurious waterfront villa on Lake Como as well. It’s accessible only by the lake, but has its own tennis court, gymnasium, swimming pool and cinema. Villa La Cassinella can be rented out by those who want to experience luxury villas in Italy. Just give Richard a call.

Donatella’s brother, Gianni Versace was another one of the celebrities on Lake Como living in Villa Fontanelle until his death. Now his sister Donatella has her own property in Italy, a villa on the same lake, joining the burgeoning crowd of international celebrities in Lake Como. Donatella is actually Italian, so it can be considered more than normal for her to have a villa in Italy, and most probably it is not the first nor the last one.

Perhaps you’ve heard of the book (and movie) “Under the Tuscan Sun”? Well, the author, Frances Mayes, does indeed have a place in Cortona, Bramasole, near Arezzo. Though the town has been a tourist attraction for years, since “Under the Tuscan Sun” was published, and subsequently turned into a film, Bramasole has become a gawker’s destination, hoping to catch a glimpse of another one of the celebrities in Italy.

Mick, lead singer for Simply Red, and easily recognized by his famous curly red locks, is reported to have had property in Taormina, in Sicily, for quite some time. In fact, he is rumored to produce his own wine. The villa is called, “Il Cantante,” which of course means, “The Singer.”

No doubt there are more international celebrities who call Italy home (at least part of the time). With luxury villas to be had, why shouldn’t celebrities snatch them up?