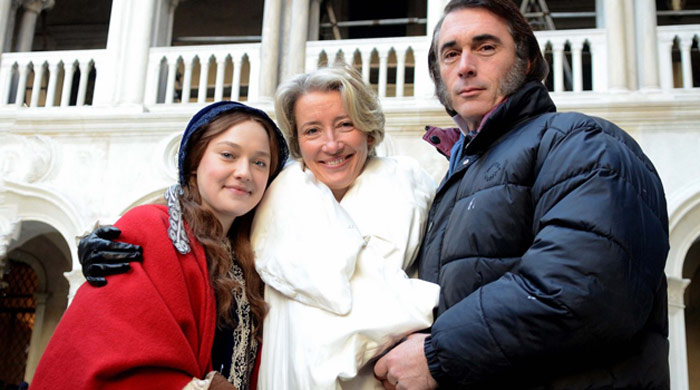 The movie, directed by Richard Laxton, also stars Dakota Fanning, Greg Wise, James Fox, Derek Jacobi and Italy’s Claudia Cardinale and Riccardo Scamarcio.  It was filmed last fall in some of the most symbolic venues in Venice: Piazza San Marco, the Caffè Florian, the Rio dei Miracoli and the Conservatorio Musicale in Palazzo Pisani Moretta.

There are many references to the various cultural events in Venice’s history such as the writing of Ruskin’s most important book, “The Stones of Venice” and the first daguerreotype of the city.

And, in the scenes set in Venice, it is Ruskin who, with a series of 450 daguerreotypes, opens the door to a revolutionary way of reproducing the city whose image had, until then, been associated with Canaletto’s paintings.

“Effie”, which is due for release in the fall and will probably also be presented at the next Venice Film Festival is, first and foremost, an act of love to Venice that Emma Thompson expresses very well in the video interview made by Venice Opportunity and kindly made available to Ville in Italia blog.

celebrities in Italy, tours of Italy