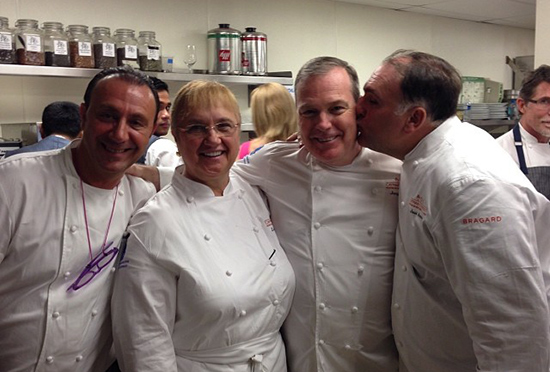 Traveling around Italy, traveling around America. Reconnecting with the many links of the privileged connection between these two countries, through the medium of food.  This could be one way of describing the life of Lidia Bastianich.

After a successful career as a restaurateur and chef (her restaurants are Felidia, Becco, Del Posto, Esca, Lidia’s at Kansas City and Pittsburgh, and she is also a partner in Eataly, New York), Lidia became a TV star with her cookery show, ‘Lidia’s Italy’, traveling around the 20 regions of Italy discovering authentic Italian cuisine as well as many Italian locations and traditions.

Another famous show of her was ‘Lidia’s Italy in America’, a trip around the States to demonstrate, through food, how “Italian-ness” is expressed and has been transformed in this country.

Now the Italian fans will follow her in the new show “Junior MasterChef Italia”, baby version of the most famous culinary talent of the globe, where Lidia will be one of the three judges.

Lidia lived in Trieste until she was 12 years old when she moved to America with her family.

Let’s discover more about Lidia Bastianich with this interview made just for us of Ville in Italia.

Could you describe the Italians who live in America to us?

On my travels I have seen that Italian-ness is still very strong through the generations.  Italian Americans are very proud of their origins, even if they are third or fourth generation Italians.

Food is the glue that unites these generations and even though it is not real Italian food, since it has become “Americanized”, it still reflects their roots. In New Orleans, for example, there are lots of Sicilians and there is a dish called Muffoletta.  I did some research and found out that this specialty does actually exist in Sicily.

In the San Francisco area there is a strong Ligurian presence and in the restaurants you can even find “Cioppino”, a famous fish soup.  The Piedmontese have tended to concentrate in the Napa Valley, where famous wines are made.  In south California, in the Salina valley, there are enormous farms where artichokes and turnips are grown, an important business imported from another Sicilian family, the D’Arrigos.

How has Italian cuisine been transformed in the States?

When the emigrants arrived at the end of the 1800s they couldn’t find the right products, there was no olive oil, Grana Padano cheese, flavorings, spices, basil, sage…So Italian cuisine had to develop by adapting.

There is an abundant use of garlic, for example, possibly because it reminded people of the taste of home.

America is, in any case, the land of abundance so, for example, in Naples, pasta with tomato is a dish prepared on Sundays with pork meat and a bit of rind, whereas here there is a lot more meat –  meatballs, sausages – because such abundance expresses the level of wellbeing they have achieved.

Apart from being one of the best known faces on the TV food and wine scene, as well as the author of books based on your show, you have also had a long career as a chef and restaurateur.  How did you begin your career?

I opened my first restaurant (La Buona Via) in New York in 1971, but I only started importing Italian cuisine in 1981, with Felidia.

Lots of journalists and personalities came to taste my food.  They were also curious about my polenta, my risotto, dishes that were unknown at that time.  Four years ago, together with Oscar Farinetti, Mario Batali and my son Joe, we opened Eataly, a large emporium dedicated to Italian cuisine in New York.

What do you cook at home?

Just like my grandmother, I follow the seasons closely: in the fall, for example, I cook risottos with mushrooms, pasta and beans, game, vegetable soups.  I also prefer certain places according to the season: Piedmont, with its truffles and fog, or Umbria.

In the summer the south, Apulia, Basilicata, Calabria, and Sardinia, as well as the northern lakes.  What makes Italy so fascinating is that it always has new things to offer, a mosaic of jewels, smaller than California but immensely rich and diversified.

And the people are so welcoming, I feel at home wherever I go, also because food opens doors.  We should also not forget the atmosphere you find in the markets, like the Vucciria in Palermo: there is a certain musicality in food …

Which places in Italy are closest to your heart?

I can’t really choose, because I traveled the length and breadth of Italy with my family when my children were small, and later, when I was studying to be a chef and went to Italy often to keep myself up to date.

The family home was in Friuli, and now my son, Joe, and I own two vineyards there, one on the eastern hills at Cividale del Friuli and another at Buttrio, just outside Cividale, and we produce wine that we export all over the world.  Our enologist, Maurizio Castelli, has also advised us to buy some more land in Maremma, south of Grosseto, La Mozza.

Joe, our partner, Mario Batali, and I, founded La Mozza in 2000.  We produce only 2 wines, a Morellino di Scansano and our Super-Mediterranean blend called Aragone. Super-Med is our term for Aragone because it incorporates great grape varieties from around the Mediterranean sea.

I have also had a chance to get to know the Maremma, a wild and wonderful land.