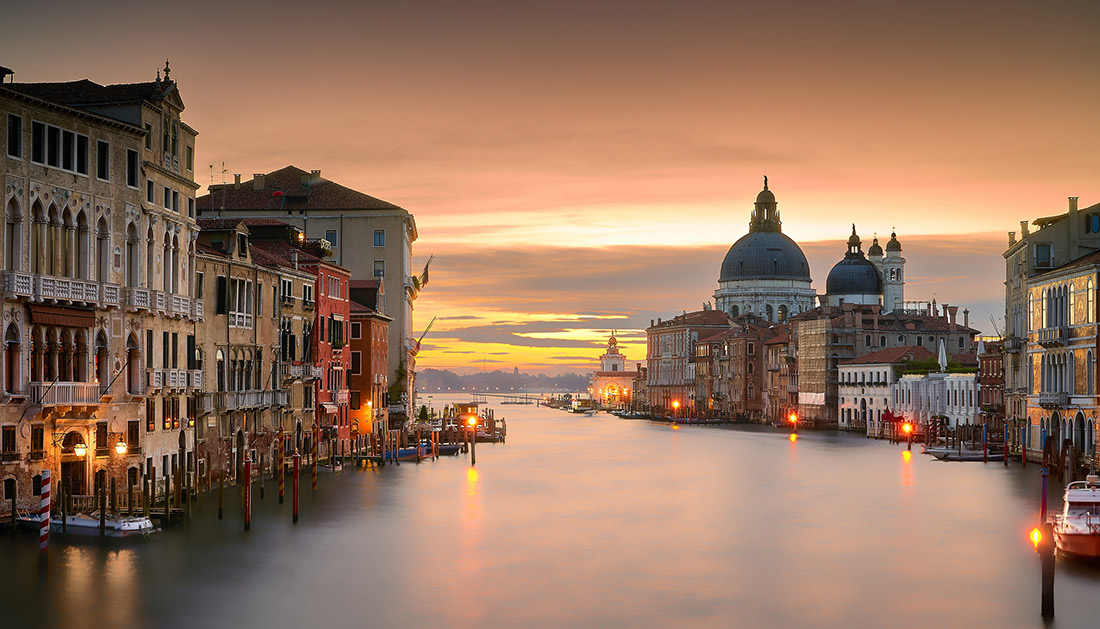 Posted at 12:35h in Italian itineraries by Caterina Lancellotti

Halloween, the most terrifying night of the year, is certainly not an Italian celebration. Yet even in our country this event, of Celtic origin, inspired by death and the occult, is starting to take hold.
Venice is certainly the ideal setting in which to celebrate Halloween with its engulfing fog and the many legends and enigmas that fill the narrow streets and palazzos.

Enjoy Venice in all its beauty and mystery

So to honor the anniversary of the dead with a touch of mystery we could start by visiting the 19th century cemetery of San Michele which hosts the remains of illustrious personages such as the poet Ezra Pound, the scientist Christian Doppler and the musician Igor Stravinsky. However inside the cemetery it is also possible to find a mysterious empty tomb: the tomb of Sister Vittoria Gregoris from the convent of San Francesco della Vigna who, before her death in 1947, told her fellow sisters that when her grave was opened, her body would not be found. And, in fact, when she was exhumed six years later, the coffin contained only her habit and a rosary and none of her bones or any other trace of her body…. 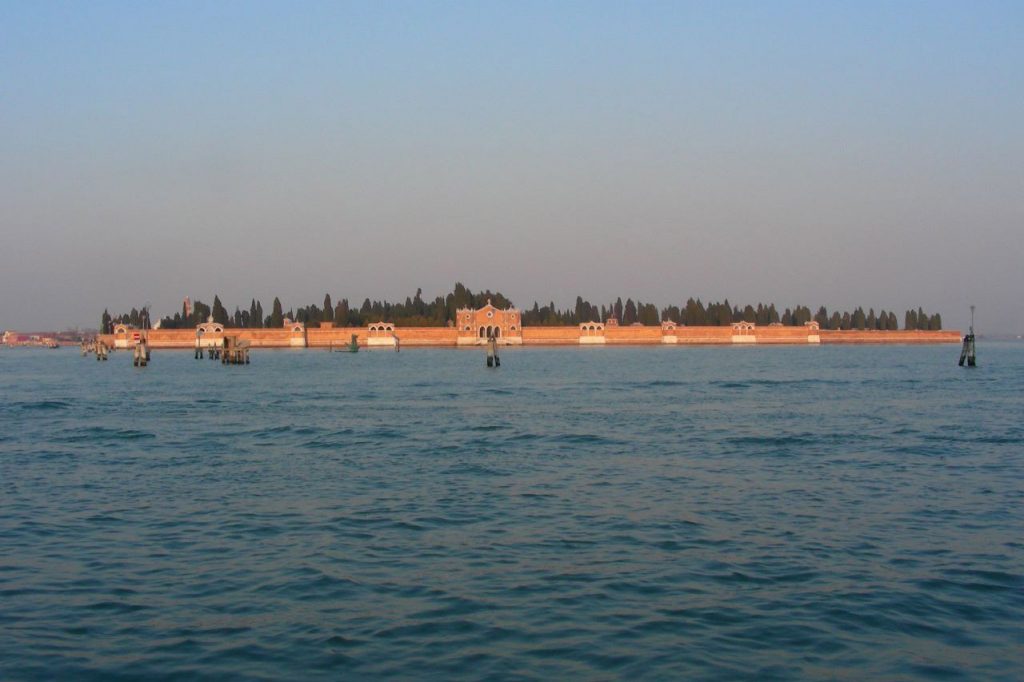 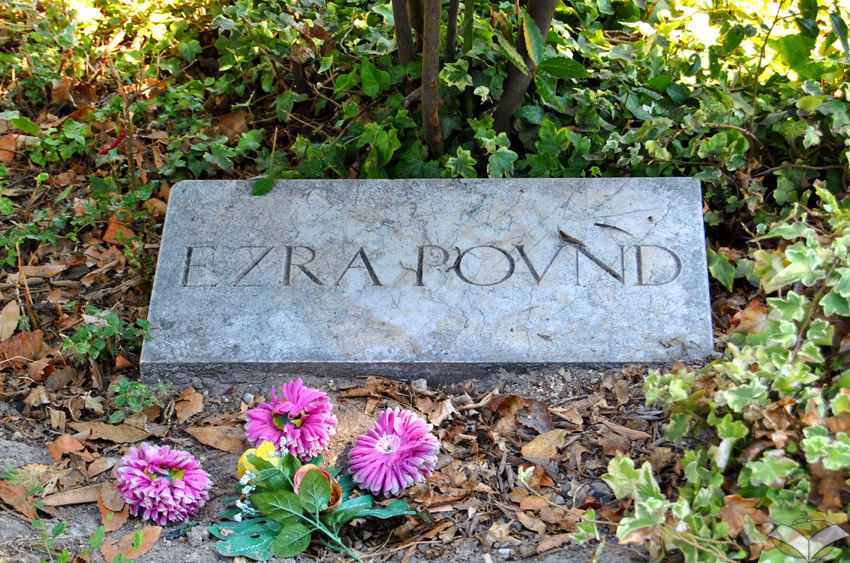 Then there is another island in Venice that is said by many to be the most bewitched place in the world: Poveglia, which has also been featured in some shows dedicated to the paranormal such as Ghost Adventures and Scariest Places on Earth. In 1922 the island housed a psychiatric hospital where a doctor carried out some atrocious experiments on the patients. After a while the doctor committed suicide by throwing himself off the hospital tower, convinced that he had been driven mad by the ghosts. The hospital was closed in the 1970s and since then the island has been uninhabited. To this day there is a widespread belief that the island is infested with ghosts and many lovers of suspense go there on purpose to feel their presence.
Cursed yet still full of charm, enough to even arouse the interest of Woody Allen who recently entertained the idea of buying the house, is Ca’ Dario 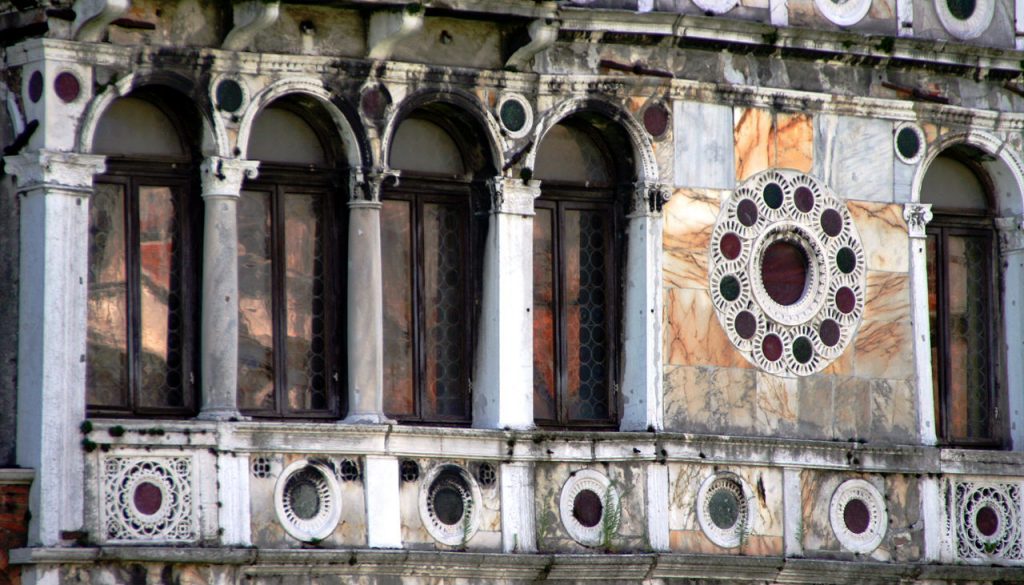 D’Annunzio described it as “bent like a decrepit courtesan beneath the pomp of her jewels”, Monet dedicated a series of paintings in many different lighting conditions to it and John Ruskin described its marble decorations in great detail. The wording on the façade reads VRBIS GENIO IOANNES DARIVS, i.e. “in honor of the city genius, Giovanni Dario”: however, as an anagram this dedication forms a much more revealing sentence: SVB RVINA INSIDIOSA GENERO (“Underneath I generate an insidious ruin”)… 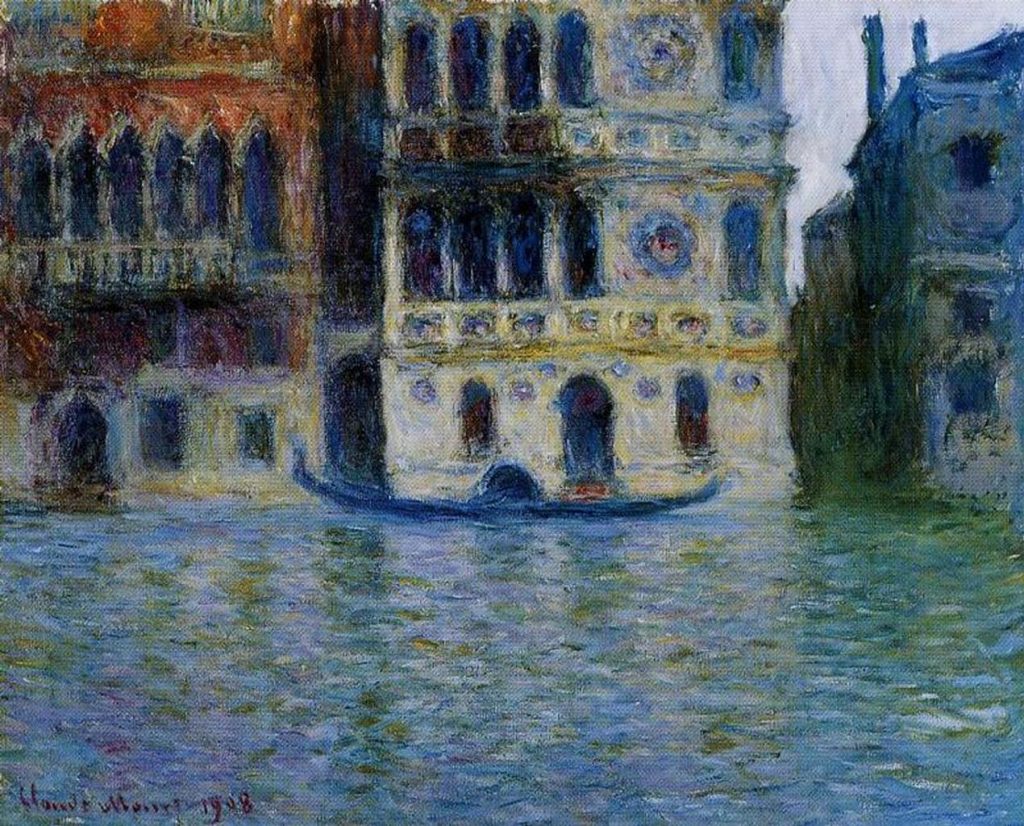 Giovanni Dario, the son-in-law of the first Secretary of the Republic of Venice, who had commissioned the construction of the house as a wedding gift for his daughter Marietta, was stabbed to death by persons unknown in a narrow street. Marietta died a few years later “of a broken heart” and one of her children was killed during a battle in Crete. The lover of a subsequent owner of Ca’ Dario committed suicide in Mexico, and Count Filippo Giordano delle Lanze was killed in 1970, fatally struck with a silver tray by his lover at the time, a Yugoslavian sailor who is still missing to this day. Christopher “Kit” Lambert, manager of the Who, who also owned the house, told friends that he preferred to sleep in the gondoliers’ kiosk because the palazzo was infested with ghosts that persecuted him every night. He also died prematurely after falling down the stairs in his London house, but some people are still convinced that it was due to the curse of the “Killer house”, as the Venetians renamed it. Mario Del Monaco, the famous tenor, was almost killed in a terrible car accident just as he was on his way to sign the deeds to purchase Ca’ Dario and the last owner, Raoul Gardini, committed suicide following a number of financial scandals. At the moment it belongs to an American company which is carrying out restoration work.

Many of the legends that drift around the bewitched houses of Venice originate from women: noblewomen, unhappy, tormented women, courtesans. 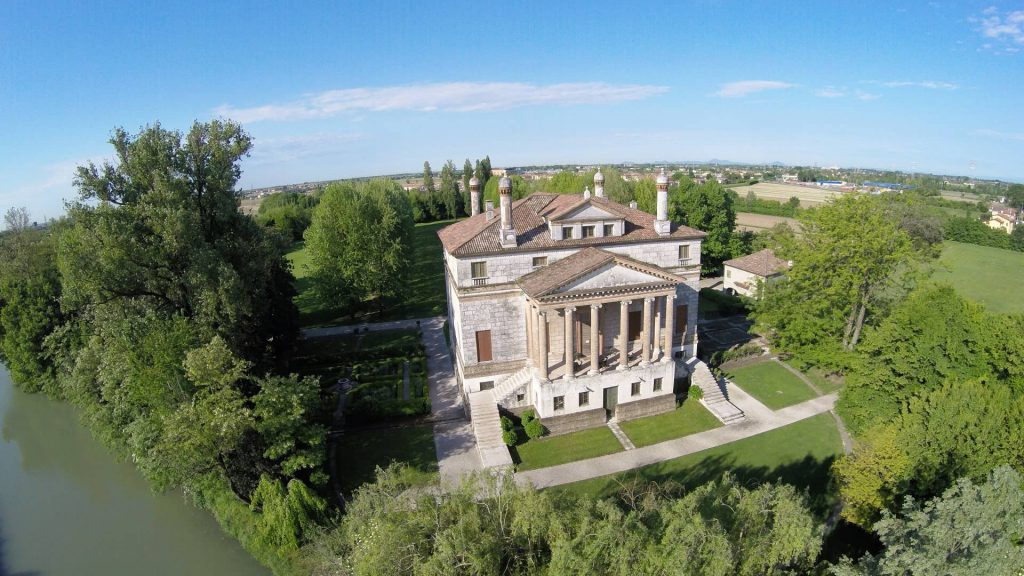 In Mira, in the province of Venice, on the banks of the Brenta River, we find La Malcontenta, a UNESCO world heritage site, which owes its nickname to Elisabetta Dolfin, a widow who married Nicolò Foscari in 1555. The marriage was an unhappy one due to her presumed infidelities and her husband locked her up here for over 30 years: it seems that her ghost still wanders around the Villa – a beautiful woman dressed in white according to some, or in black according to others.
An unrequited love for Cecilia, the lover of the painter Giorgione, generated another ghost: that of Luzzo who, it is said, wanders around crying in the “Casin degli Spiriti” (“house of spirits”), a cursed place because of its sinister appearance and the dark noises that can be heard at night caused by the sounds of the backwash and the wind. This is the annex of Palazzo Contarini Zaffo that stands elegant and alone on the lagoon at the point which lies at the end of the Fondamenta Nove. 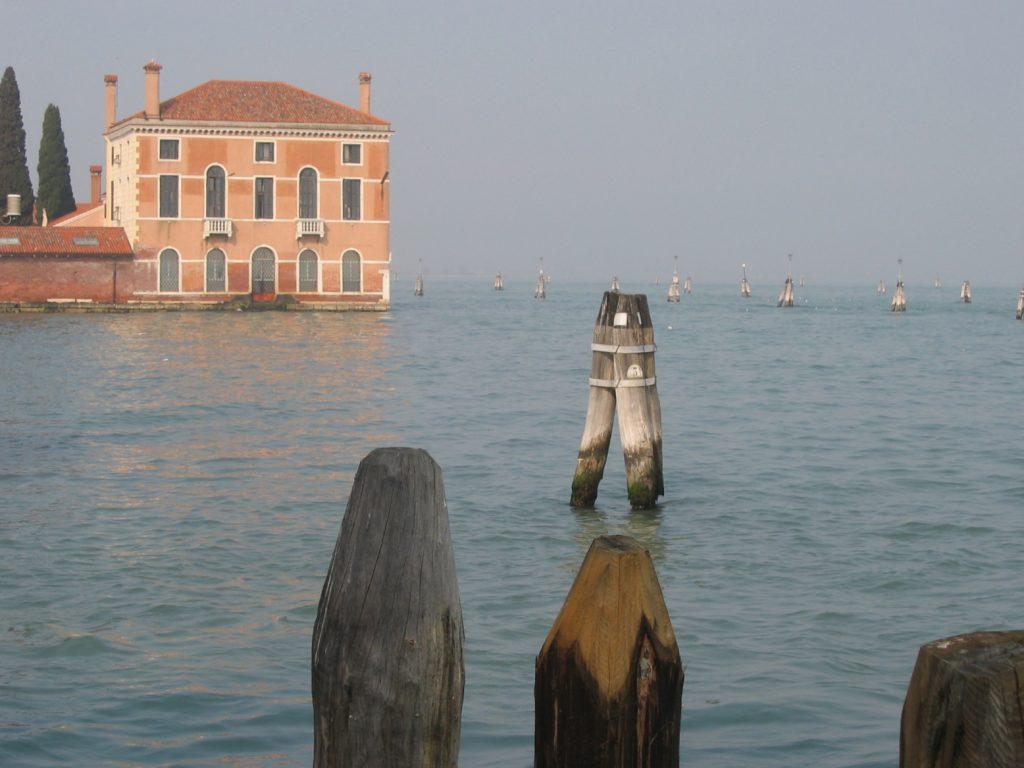 Another legend concerns the wife of the famous Marco Polo, one of the daughters of the Great Khan who the Venetian merchant met during his stay in China. 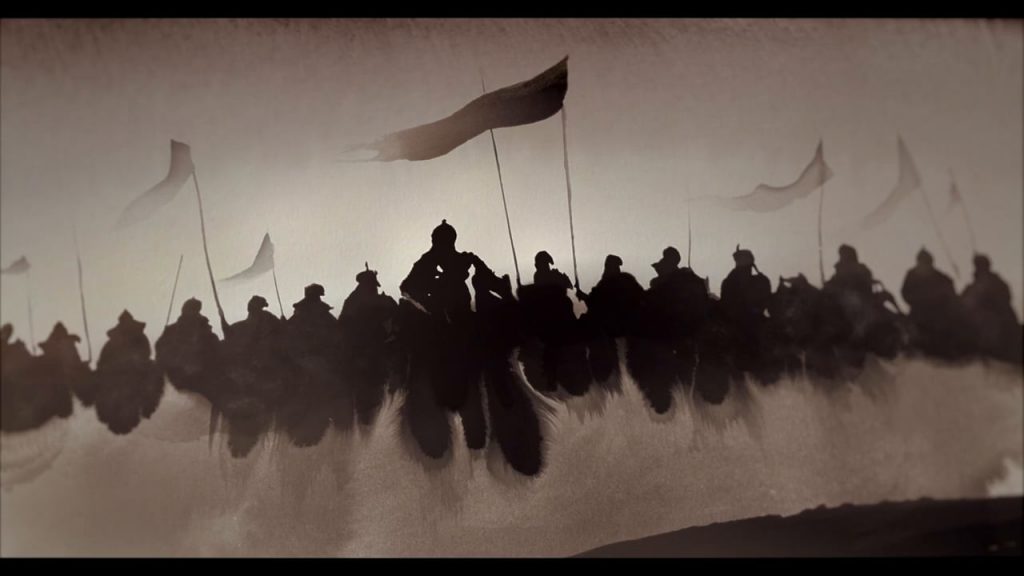 This sweet and gentle girl was not very happy in Venice, a victim of the jealousy of her husband’s sisters who, when he was captured in battle by the Genovese, told her that he was dead. In her great sorrow the girl set fire to her clothes and threw herself out of the window of the Polo house into the canal below where sometimes it is possible to see a white figure fluttering in the air or hear a sweet Oriental song.
A few years ago, during the excavations for the foundations of the Teatro Malibran (built on the site of the ancient house belonging to the Polo family), the human remains of an Asian woman were found buried alongside objects that were obviously made in China as well as a diadem with the imperial coat of arms… 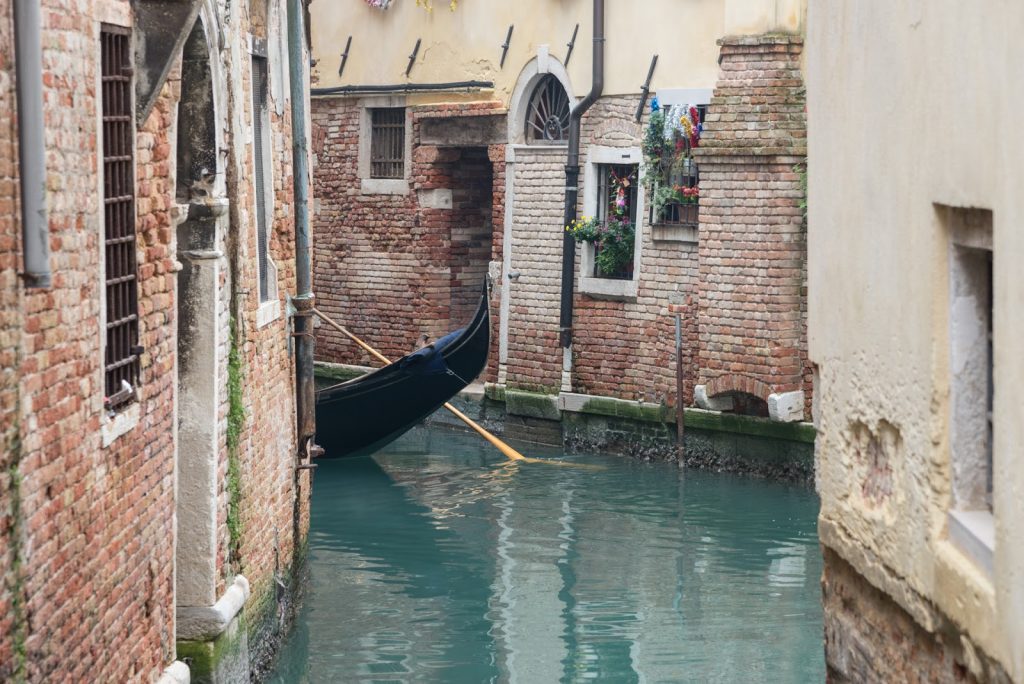 Palazzo Grassi in San Samuele, today the headquarters of the Foundation of the billionaire contemporary art collector, Francois Pinault, is also said to be inhabited by the ghost of a young girl who threw herself off (or was thrown off) one of the balconies of the palazzo’s internal courtyard after a violent episode. The palazzo’s caretakers have often stated that they have heard someone calling her name, as though the person were right there whispering in their ear… 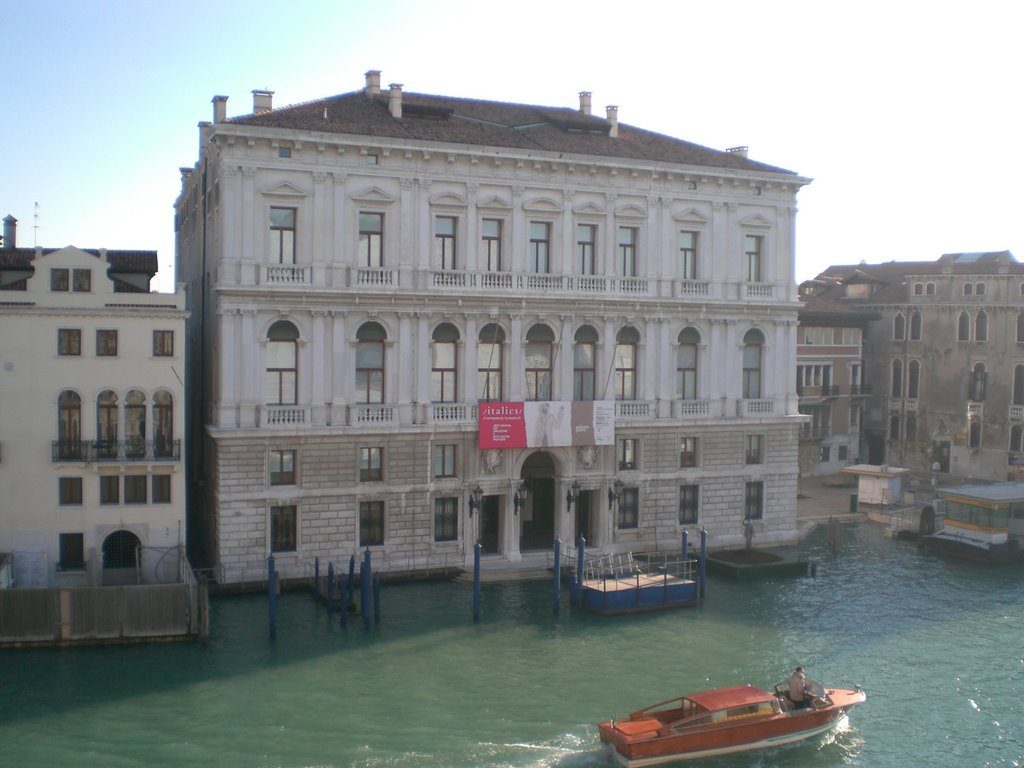 During the renovation work carried out on the palazzo in the 1980s, whilst he was walking around in the dark, an old night watchman heard a voice telling him to stop; once he got over his fright, the man switched on his torch and started looking for the person who had called him but without success… However he noticed that the voice had made him stop just a step away from a chasm in the floor that the workers had made during the day and neglected to cordon off safely: by shouting at him, the ghost of Palazzo Grassi had saved his life!
Another ancient palazzo with a troubled history and a mysterious legend is Palazzo Mastelli where in around 1100 A.D. three very rich merchants, Rioba, Sandi and Afani tried to swindle a Venetian lady. The latter, after discovering what they had done, cursed the money she had given to the three and when the criminals touched it, they immediately turned into the stone statues that can be admired in the field nearby. 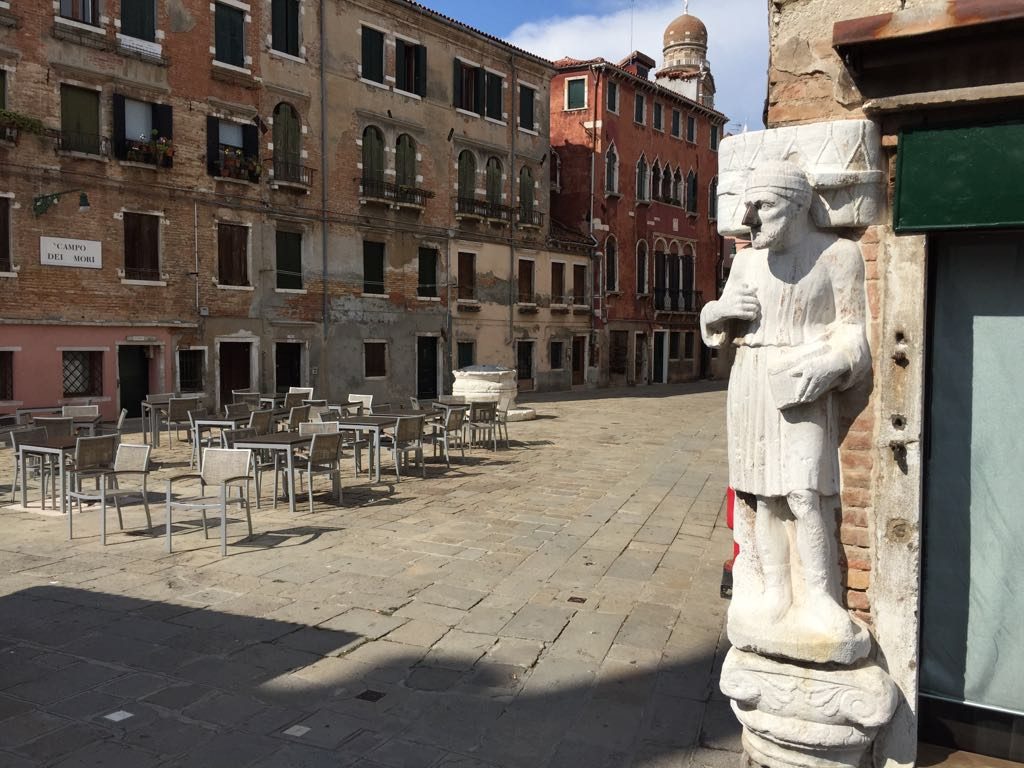 Near the Ponte di Rialto many people have noticed the calm waters of the canal start to ripple and a human looking shape emerge from the dark green waters with a woman’s head in its hand… It is Fosco Loredan… and the remains of his wife. In the 1600s Fosco, crazy with jealousy, used a sword to decapitate his wife Elena, one of the daughters of the brother of the Doge, Marino Grimani. 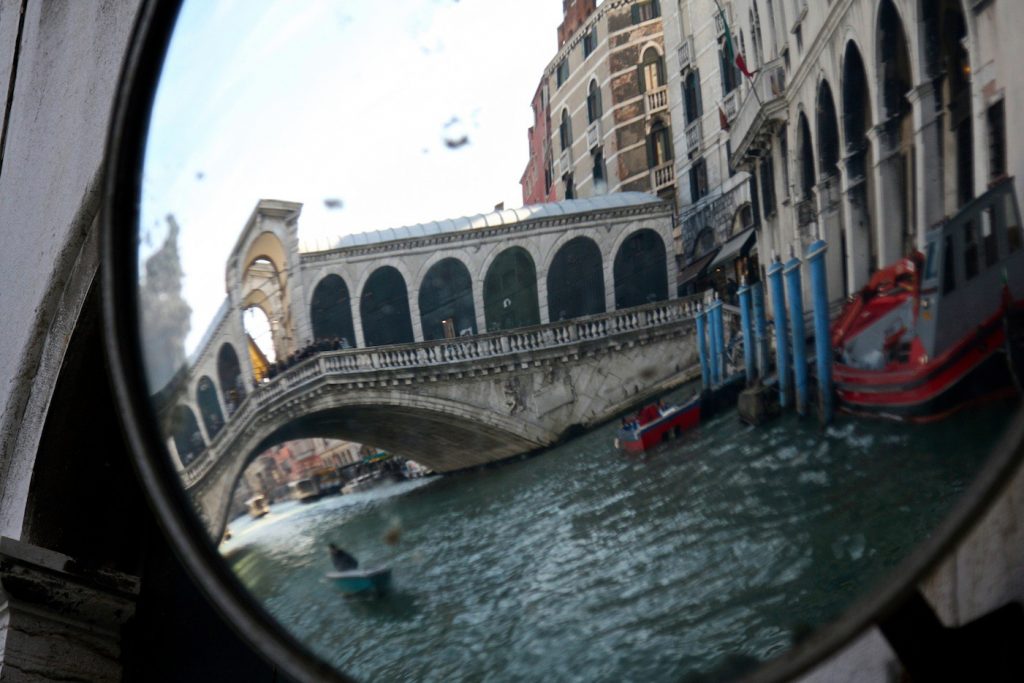 The Doge Grimani, who was passing by and saw everything, ordered Fosco to load beautiful Elena’s head and body on his back and take her to the Pope in Rome who would decide the man’s fate. But the Pope refused to receive him so Fosco returned to Venice, threw himself into the Grand Canal and slowly drowned.
According to legend a terrible creature similar to an enormous sea serpent also lives under the Punta della Dogana on the Grand Canal in Venice which is known as the ‘black water monster because it very rarely allows itself to be seen on moonless nights.
The last sighting dates back to 1933 when two fishermen catching cuttlefish swear to have seen it come out of the water and devour a seagull in a single bite!
The sestiere or district of Dorsoduro in Venice, near the Museo dell’Accademia, hides another curious object. In Calle della Toletta there is an old alarm clock hanging on a yellow-colored house. 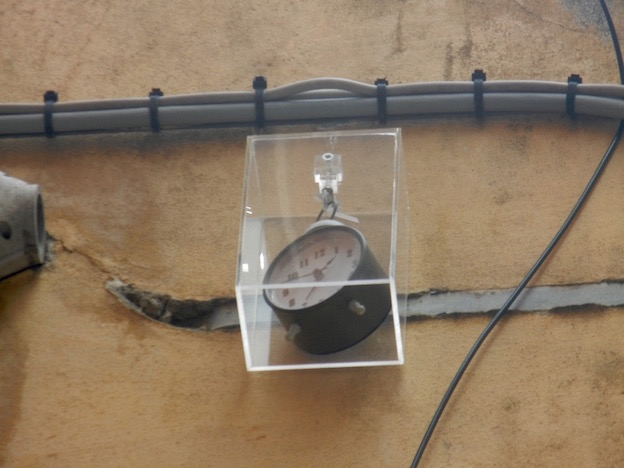 The old alarm clock hanging on a yellow-colored house

In the past this clock marked the hour in which ’spells’ were carried out by a witch who lived nearby and enjoyed practicing black magic. When the witch died the house remained closed up for many years because no one wanted to live there.
The large alarm clock in original copper is not the one that hangs there today which is, instead, the ‘third’ alarm clock to be replaced over the years since every time it was removed, disturbing phenomena occurred: noises, inexplicable visions, disappearing objects, small domestic accidents.

Not even the Lido di Venezia, an exceptionally glamorous location because of its historic Film Festival, can escape the ghosts. The Hotel Excelsior which, since the 1930s, has hosted fabulous parties with actors and film stars, hides within its halls and gardens the ghost of the actress Luisa Ferida, a star of 1940s Italian cinema who died in 1944 at the age of thirty-one, executed by the partisans because she was accused of having taken part in torture organized by the Fascists of the Republic of Salò. 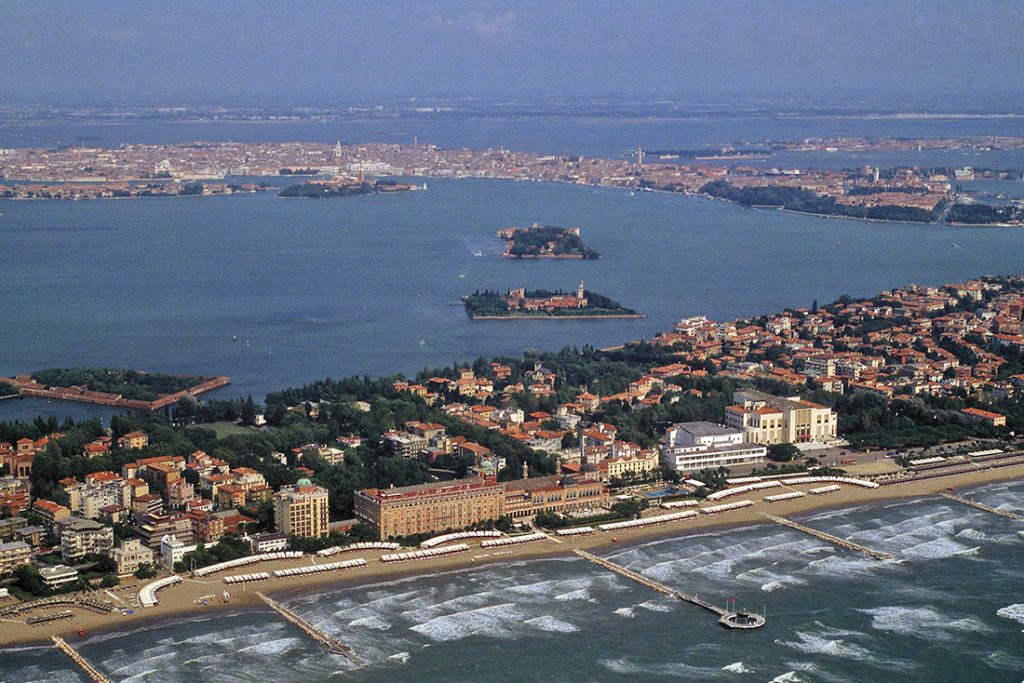 Many witnesses are said to have seen her wandering around wearing evening dresses and an ostrich feather boa, asking about her husband, the actor Osvaldo Valenti, who was also shot by the partisans.
Calli or narrow streets, Palazzos, islands: it is impossible to visit them all in one night. Better to take your time and enjoy Venice in all its beauty and mystery. 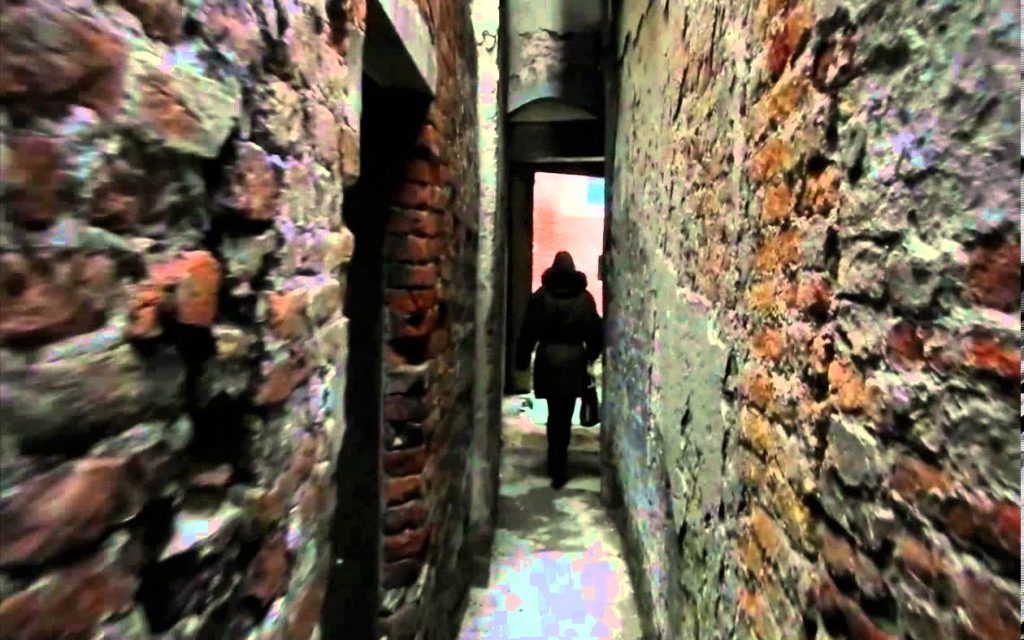 Calli or narrow streets, Palazzos, islands: it is impossible to visit them all in one night