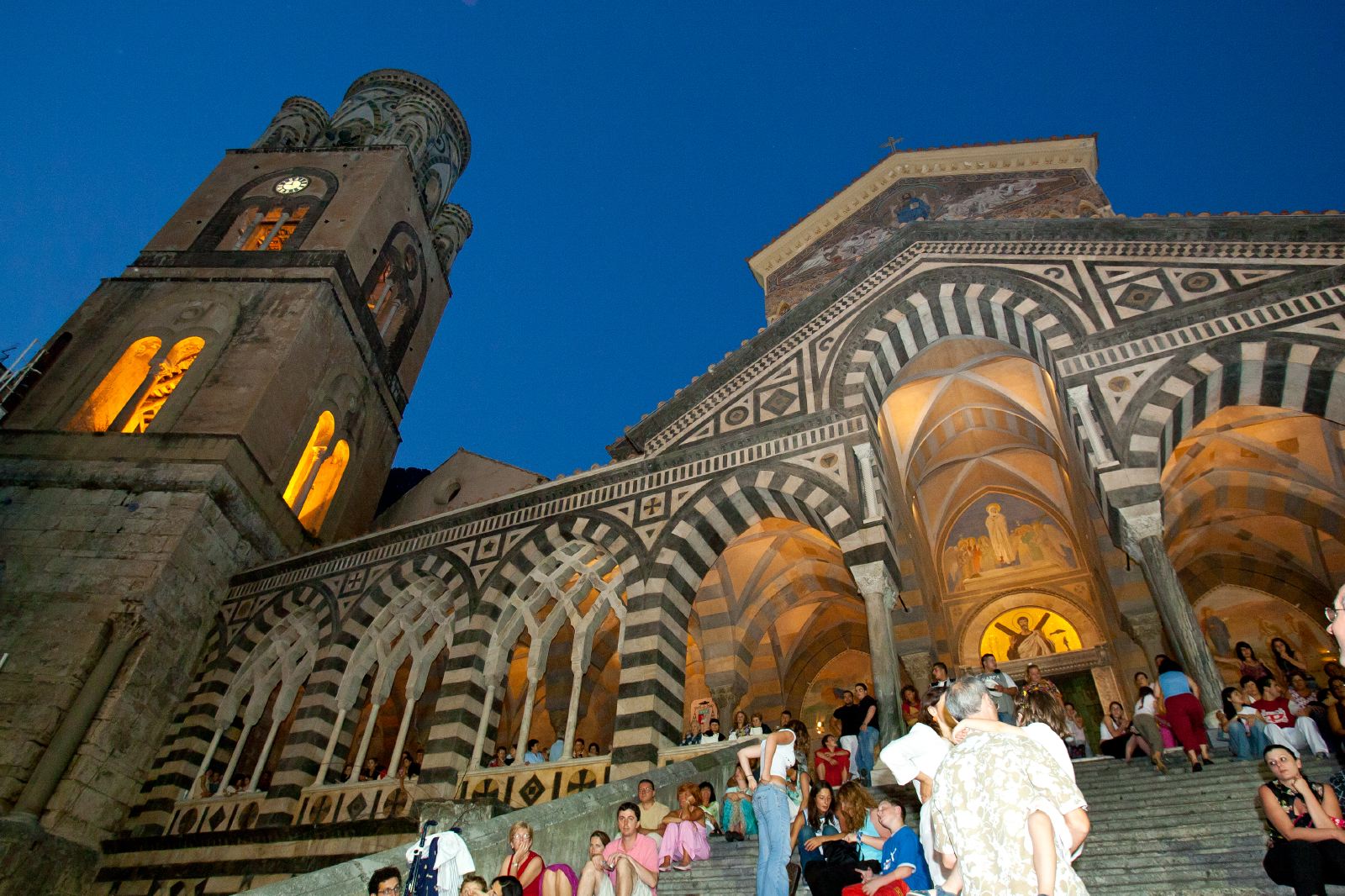 Posted at 11:30h in Italian itineraries by allyou

“The inhabitants of the Amalfi Coast are crazy, they are drunk on sun. But they know how to live, taking advantage of a strength that few of us possess: the strength of fantasy”.

This is how Roberto Rossellini, maestro of neo-realist cinema and husband of Ingrid Bergman, loved to remember the Amalfi Coast where he set many of his films (mainly in Maiori) between the 1940s and the 1950s. The fantasy of the inhabitants and the excellent climate make the Amalfi Coast a special place to visit, particularly towards the end of the summer, in the autumn, when most of the tourists have gone home and it is possible to enjoy the colors and scents of these places in tranquility, savoring the local products which are celebrated with lively traditional festivals. 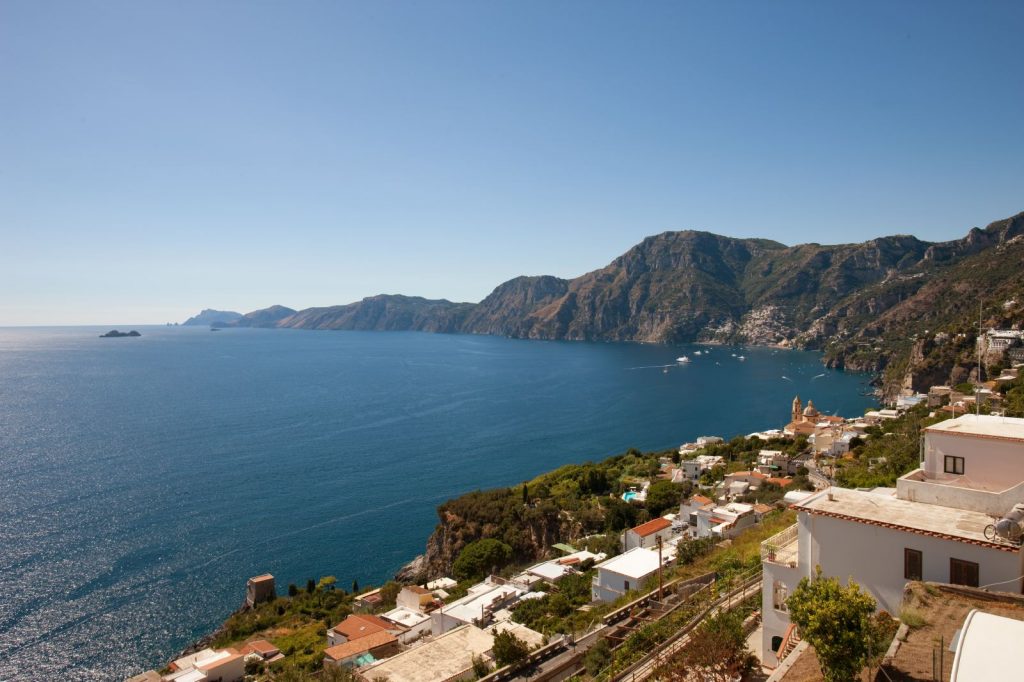 There is nothing better to celebrate the end of summer than the Ravello Festival which, until 30 September, hosts internationally famous artists who alternate symphony and chamber music, jazz and pop repertoires as well as incursions from the world of theater, the visual arts and dance.

All the performances at the Ravello Festival are held inside the Auditorium Oscar Niemeyer or in the enchanting belvedere of Villa Rufolo with its wonderful stage suspended over the blue sea. Moreover, for the last few months, at Villa Rufolo it has been possible to visit the splendid, recently restored Torre Maggiore and enjoy, from the terrace, the unique view of the coast dropping steeply down to the sea. A symbolic monument of Ravello and the villa, the Torre Maggiore becomes, for the occasion, a regular vertical museum, halfway between the real and the virtual. 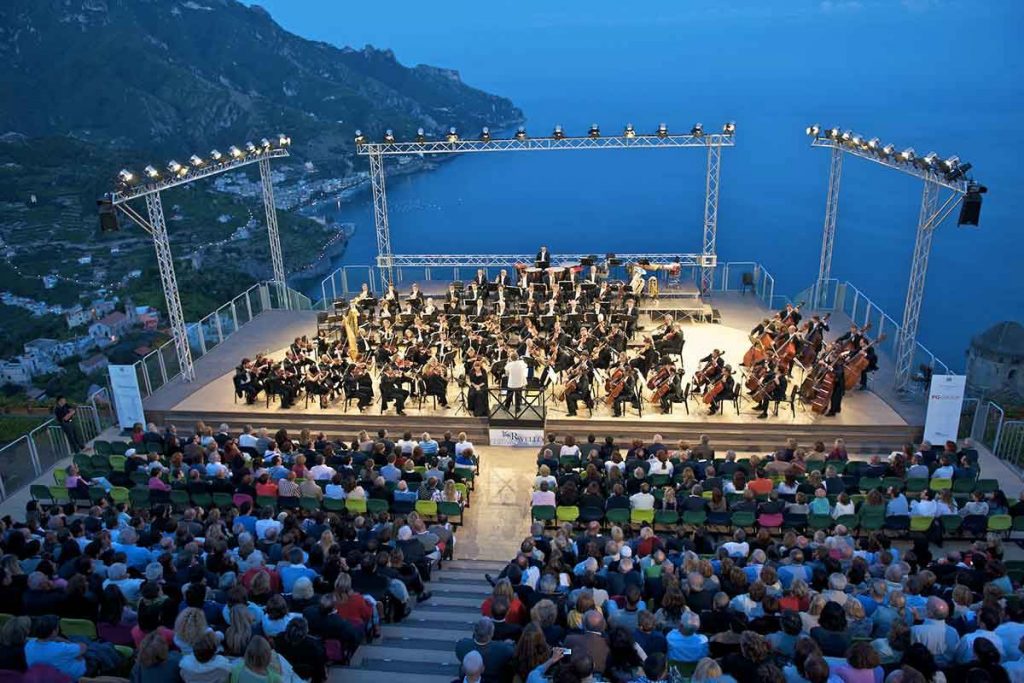 On the last Saturday of September, lovers of fish and tradition cannot miss the historic Festa del Pesce [Fish Festival] in Positano that is held on the stunning beach of Fornillo which can be reached from the town by taking a romantic walk between the sea and the rock departing from the boat jetty in Positano, or by sea, with a short crossing that is free of charge. The festival opens in the afternoon in the center of Positano where a rowdy band of “sailor players” parades along with its “musicians”, bringing the passersby to the Jetty of the Spiaggia Grande. 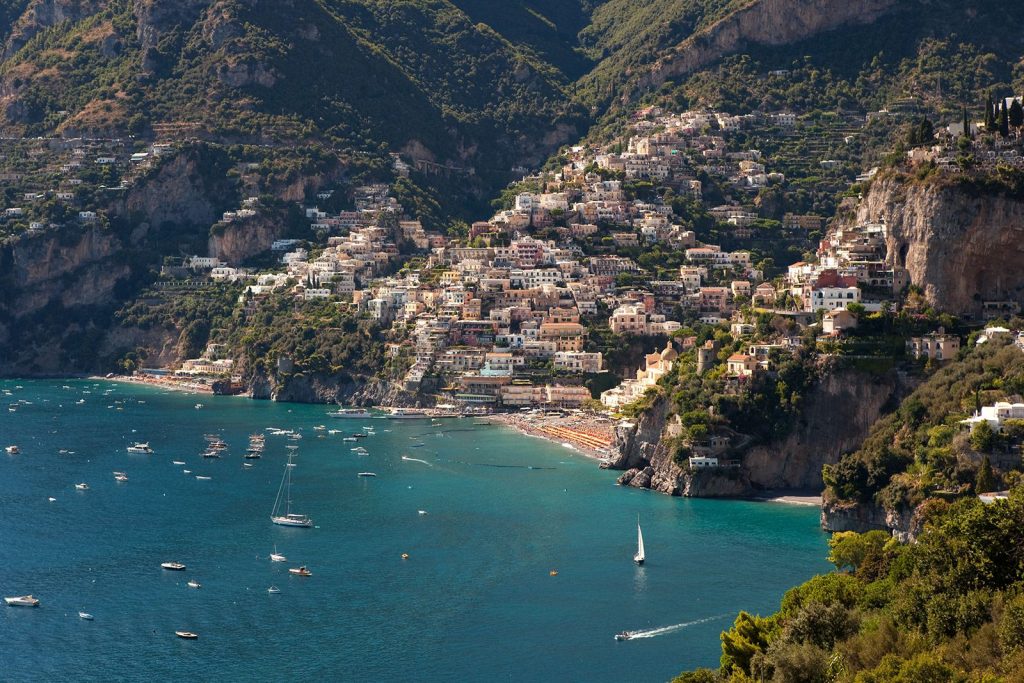 Then, on the beach of Fornillo, the heart of the festival, fresh products from the sea along the Amalfi Coast are prepared on the spot for all the visitors.

For trekking enthusiasts the month of October on the Amalfi Coast is a real paradise; some of the best routes on the Coast include the 1450 meters of Monte San Michele and the spectacular landscape of the Fiordo di Furore, one of the most beautiful sights of the whole Amalfi Coast, which is also known as “the town that does not exist”, because there is no actual built-up area and the houses just “sprout out” from the rock ridges. The infinite original murals and sculptures by the roadside make it an open air art gallery surrounded by terraced vineyards from which some of the coast’s most valuable wines are made. In the past the Fiordo di Furore was a fishing village created by the incessant work of the Schiato stream that flows down from Agerola. Agerola is another interesting tourist destination known as “the land of gods”: a 600 meter balcony overlooking the Coast, set in the mountain chain of the Monti Lattari and crossed by a cordon of 60 km of luxuriant paths including the famous Sentiero degli Degli Dei [Pathway of the Gods], that connects it to Positano, half an hour away from the archeological area of Pompei. 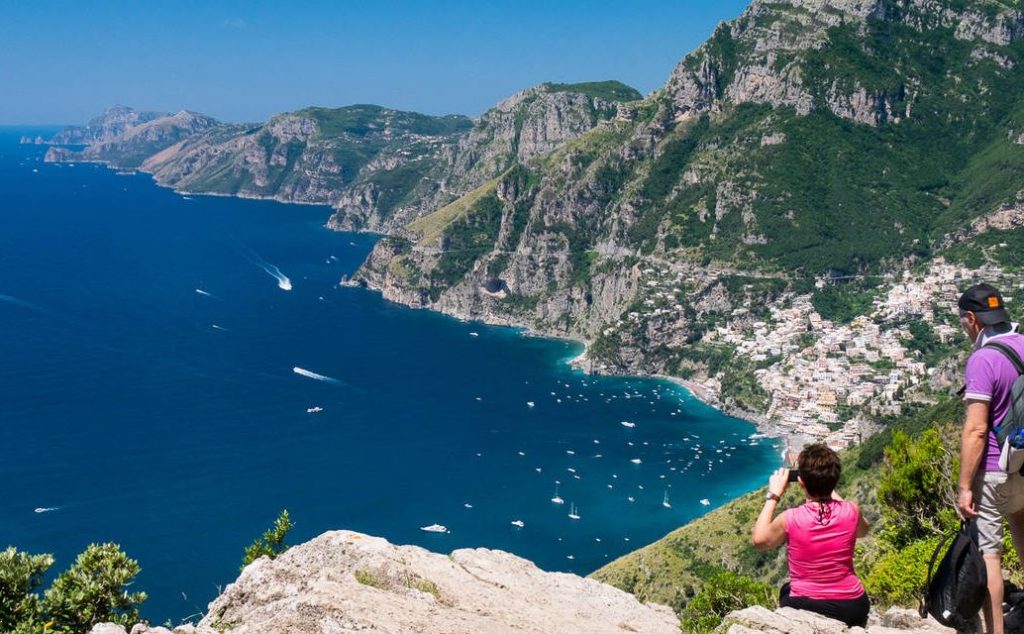 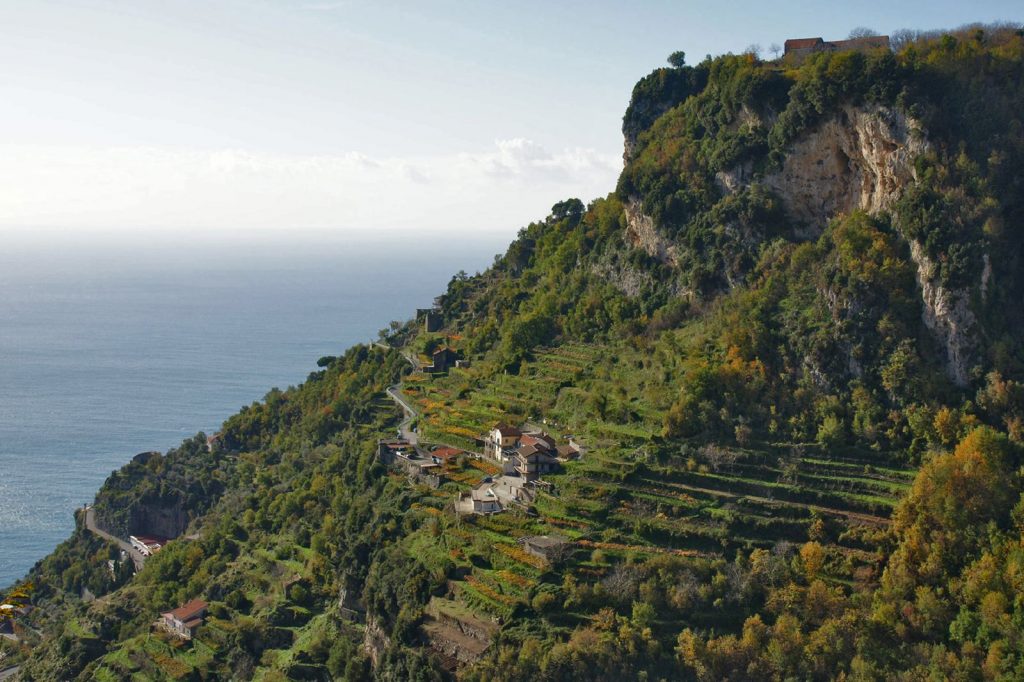 On the Monti Lattari it is also possible to go along the Vallone delle Ferriere that links the village of Pontone (which can be reached on foot from Ravello) to Amalfi. The area is also known as the Vallone dei Mulini due to the presence, on the final part of the route, of the watermills that were once used to produce the famous Amalfi paper. 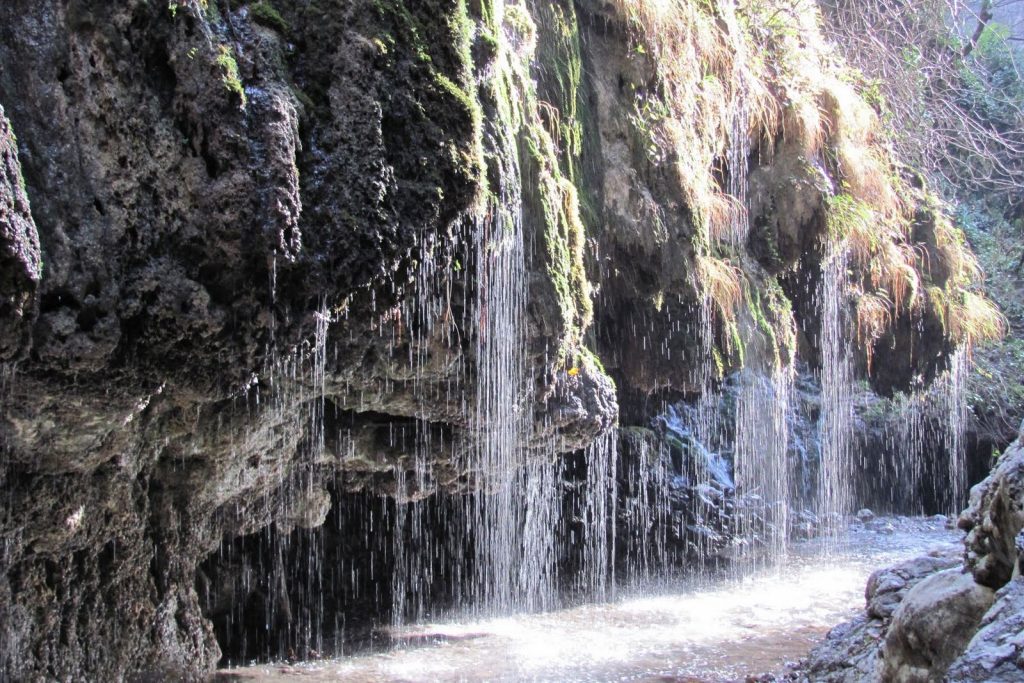 The Valle delle Ferriere also cuts across the medieval village of Scala, the oldest town on the Amalfi Coast where, every year in October, the arrival of autumn is celebrated with the Festa della Castagna [Chestnut Festival], the typical product of the area. This festival is enlivened by the games of the “Palio delle contrade”, a kind of contest during which Scala’s ancient traditional games are played: tug-of-war, the Greasy Pole, Trocchiello, sack races.

Events in Amalfi, Cetara and Positano

November 30th is a holiday in Amalfi: it is the feast of Saint Andrew the Apostle, the town’s patron saint, whose bronze statue is accompanied through the streets of the town by the faithful and by a musical band in a procession that ends with a traditional race in which the bearers, dressed in red, run up the majestic staircase of the Cathedral. 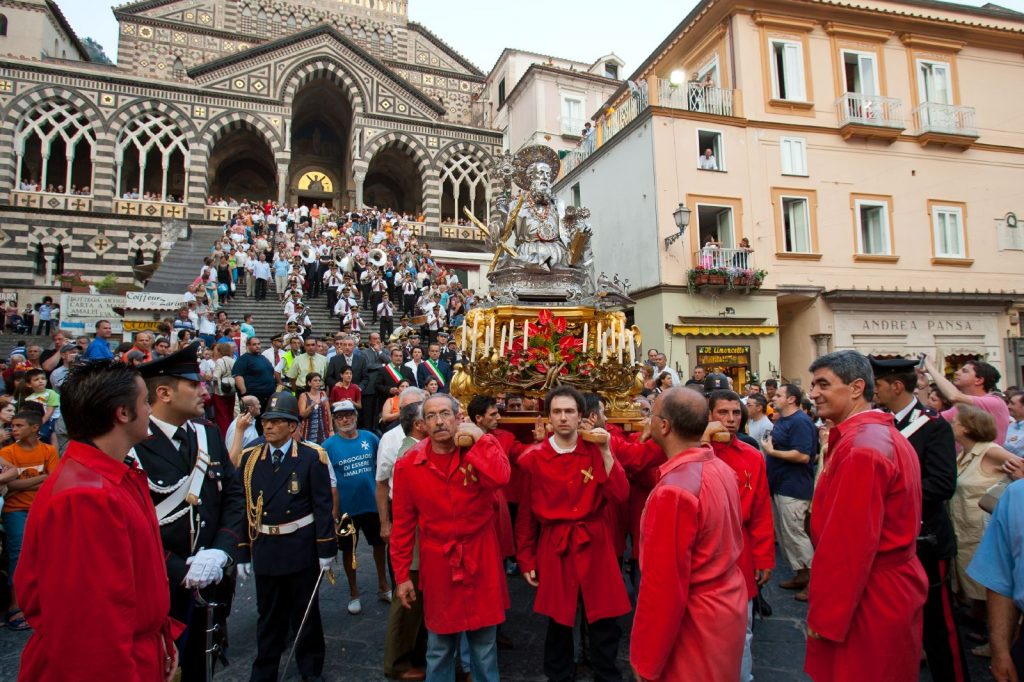 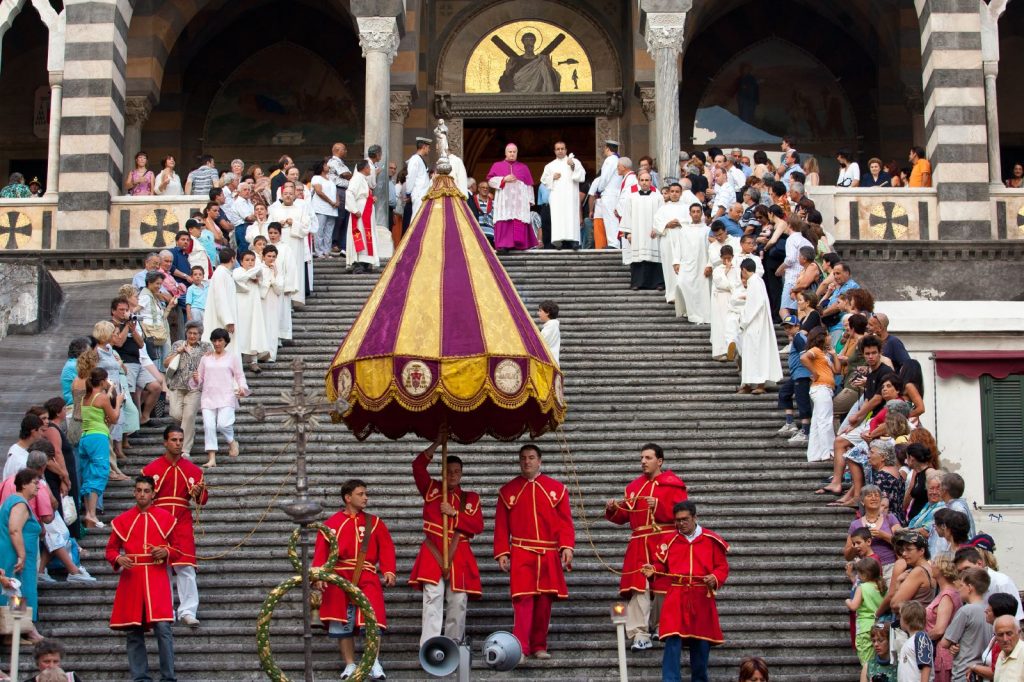 Feast of Saint Andrew the Apostle

Another valuable place for discovering ancient flavors is the seaside town of Cetara, famous for its Colatura di Alici, the precious anchovy condiment that has been produced here since ancient times and which is celebrated during an event that takes place in December when all the restaurants in the village prepare recipes exclusively based on the fish sauce.

Finally, no one with a sweet tooth should miss the Festa della Zeppola which is held in December on the Spiaggia Grande of Positano which, with the lights and typical Christmas colors, creates a unique scenario for the thousands of visitors who come every year to celebrate one of the most delicious local traditional pastries: the Zeppola.

Lemons of the Amalfi Coast