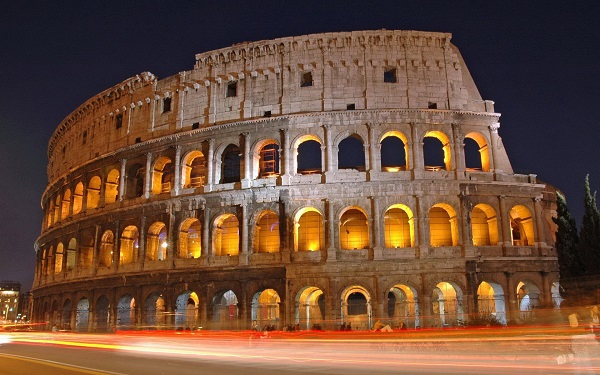 The Roman Colosseum is one of the most recognizable and frequently visited landmarks in Rome or Italy.

As one of the oldest standing monuments in the country at just over 2000 years, the history that has taken place on these grounds spans the ages. Erected in an era when dynasties ruled and class discrimination was rampant in the kingdom, every citizen was admitted to the games, which took place here, free of charge.

The massive spectacle they witnessed was without comparison and remains to this day one of the largest, most impressive and bloody examples of public entertainment in history. Aside from the image most of us have, there are a few facts about the Colosseum even frequent visitors may not know.

1. When Was The Colosseum Built? What Was It Named For?

The massive structure was completed in 85CE. The Colosseum may be the most visited location in Rome today but it was actually named for equally impressive work that unfortunately no longer stands. When erected the, the Colossus statue of Nero stood nearby. At 106.5 Roman feet and cast in bronze, it was a wonder of the old world and pride of the community. Destroyed most likely in the sack of Rome and scavenged, the Colosseum remained, retaining its name as an ode to the now lost statue.

2. Facts About The Coloseum’s Death Toll

Many people know that the Roman Colosseum was the site of brutal competitions and many people died on the grounds. What they don’t know are the staggering numbers. A single games event held here is said to have included up to 10,000 men and 11,000 animals that lasted over four months. This was one of the largest events in Colosseum history. Historically it is believed that in its hundreds of years of service over 500,000 people and over a million wild animals died during the events.

The image of Colosseum events includes gladiators, lions, tigers and great battles. What is often not included but was incredibly popular, were ship battles. The Colosseum was actually flooded and great reenactments, including miniature warships, were held for the audience to celebrate great naval victories.

4. Facts About The Colosseum Facade

Destroyed partially during a great earthquake in 847, parts of the Colosseum have actually been harvested and used in other buildings. The great marble facade that used to grace the outside of the Colosseum has been carried away and used to construct St. Peter’s Basilica. As grand as it is today, the Colosseum in its prime with full height walls and marble exterior was astonishing in its architecture.

5. Facts About The Colosseum Size

How big is the Colosseum exactly? The inspiration for modern sporting arenas, the Colosseum in Rome could compete as a premier venue even today. The spacious arena had seating for over 50,000 people. Today it’s still occassionally used for entertainment, though less violent than previous centuries. Big names that have played the Colosseum include Paul McCartney, Elton John, Billy Joel and Ray Charles.

For those not very fluent in Italian, try not to get tripped up when unable to find ‘The Colosseum’ on many road signs. In Italian, the common name for the Roman Colosseum is the Flavian Ampitheatre or Anfiteatro Flavio or in some cases simply Colosseo.

For more informations about what to see inRome and some other tips about traveling in Rome, have a look at these post:

– Travel Guide: Rome in 3 days
– Tour of Rome: tips, advices and food from the best Rome bloggers
– Weather in Rome