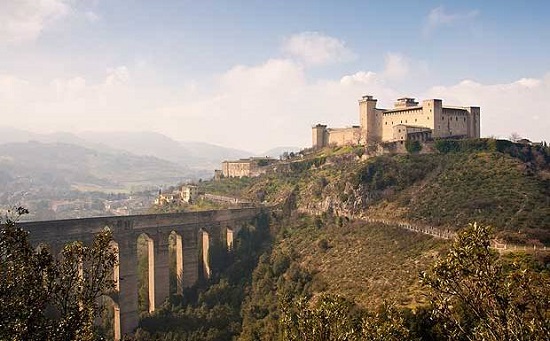 Umbria is situated in the very heart of Italy. It boasts of historic grandeur, scenic landscapes and rich cultural and artistic traditions.

La Scarzuola is the brainchild of legendary Milanese architect Tomaso Buzzi. Stepping into the surreal world of La Scarzuola is a dreamlike experience in itself.

The conception of this garden is based on the illustrated poem titled, ‘Hypnerotomachia Poliphili’. Metaphors from one’s own life could be found lying all around in this garden. It prompts everybody to take a trip within and the experience proves to be an exemplary one.

Half of Lake Trasimeno is surrounded by hills covered with rich vegetation consisting of pine, poplar and willows; the other half is surrounded by vineyards and olive groves. The lake itself is slightly smaller than

Lake Como. Last remains of Etruscan settlements are still found close by the lake. Explore the region’s best villas to stay in.

Bevagna is located on the flood plain of River Sand Martin. This small town is the home to Roman baths surviving since 2nd century AD. The elaborate mosaic art on the floors of these baths speak highly about the caliber of the artists and artisans who worked here in the past. The mosaics depict mostly marine animals, some mythical and others real.

The existence of such beautiful works of art was first documented by Andrea Camassei (about 1630) and it was rediscovered in 1891. The architecture and sophisticated drainage systems of these baths are also subjects of many studies.

The picturesque town of Montone provides you with an opportunity of experiencing a close tryst with nature. The charming town is nestled in a sea of greenery. A visit to The Church of St. Francis and its museum is a must for the art aficionados. Visitors may enjoy watching the ancient art of forging wrought iron in the local exhibition center.

The best way to experience Citta’ della Pieve is by walking down its narrow lanes, some of the narrowest of the entire country. The Palio of the Terzieri, a colorful costume festival, held every August and The Aphrodisiac Festival held every September are some of the biggest cultural events of the town.

The passionate lovers of cinema will not be able to ignore the allure of The Umbria Film Festival. It is organized every year around June – July in Montone. The festival exhibits some of the best films of the country.

Orvieto could be said to have survived the onslaught of time successfully. Its unique topography sets Orvieto very much apart from the other towns.

It is completely built on a summit of a volcanic butte. Besides unparalleled natural beauty, Orvieto takes pride in being home to many architectural landmarks of significant importance.

The Orvieto Cathedral is one such architectural marvel. The interior of the cathedral, the Chapel of San Brizio, houses frescoes of Fra Angelico. A secret labyrinth of tunnels, galleries and cellars lie hidden beneath the surface of Orvieto.

No trip to Umbria can be complete without tasting the famous red wine of Montefalco, also known as Montefalco Sagrantino secco. The wineries use the famed Sagrantino grapes to produce this dry red wine. It is seasoned for thirty months in oak barrels. The wine is categorized under DOCG, denoting its high quality.

Places to Stay in Umbria

Umbria can best be experienced by booking accommodation in any of its classical villas or charming farmhouses. Many of these traditional accommodations have been upgraded to suit the tastes of modern tourists. These self-catering properties have no dearth of facilities. You may enjoy a plunge in the pool or a stroll in the shaded parkland any time of the day. The panoramic view on offer from many of these villas and townhouses is an added boon.

Consider availing the benefits of car rental services to commute in and around Umbria. By renting a luxury car, trips to Umbria’s many attractions become hassle free and unforgettable. Opt for tailor-made services on offer to enjoy a one of a kind extravagance experience.