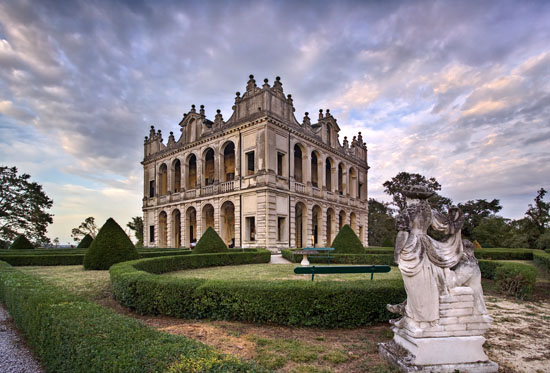 The architecture of the Villa reminds us of its original use for recreational purposes: it greets and astonishes guests, flaunting its beauty from every viewpoint. The spectacular, theatrical appearance is no surprise as Varotari began his artistic career as a painter in the workshop of the famous artist Paolo Caliari, known as “il Veronese”.

Most of the Villa’s rooms and stairways have been frescoed by Varotari. There are some frescoes by Aliense, an important painter of that period whose works can also be seen in the Palazzo Ducale in Venice.

Mythological scenes greet us along the walls of the loggias that border the indoor areas, giving the passageways a lighter feel.

The names of the rooms distributed over the two floors are evoked in pictorial patterns on the walls and vaulted ceilings: the Camera della Vigna, reminds us of the family’s ancient vocation for producing wine, the Camera delle Villedepicts all the properties owned by the Capodilista family,

then we have the Camera delle Architetture [Architecture Room], the Camera delle Muse [Room of the Muses], and the Camera dei Cinque Quadri [Room of Five Paintings]…however, more than the realism of the topics depicted and the authenticity of the furnishings it is the succession of landscapes and imaginary architectures that astonish and fascinate, with tromp l’oeil effects that open up the spaces, recalling the outdoors.

These features stir the imagination of the guests who are able to enjoy the harmony of the surrounding landscapes, with the Euganean hills visible on the horizon. This feeling of harmony continues into the garden which is dotted with statues depicting young lovers in tender poses.

These are the sensations it was probably intended to arouse in the people who withdrew into these rooms after a day’s hunting. These same sensations can now be experienced by guests who, during the summer months, can make the Villa their home, albeit just for a vacation.

The Villa has managed to preserve its original splendor thanks to the family which has owned it for five centuries. It is a listed building, subject to the restrictions of the Monuments and Fine Arts Office that makes sure everything remains authentic: it would not have been possible to realize the small swimming pool in the garden, for example, if there had not originally been an icehouse in the same place.

During the winter, the Villa is open to the public. We enjoyed a tour of the Villa accompanied by a very special guide: Countess Francesca Papafava dei Carraresi.