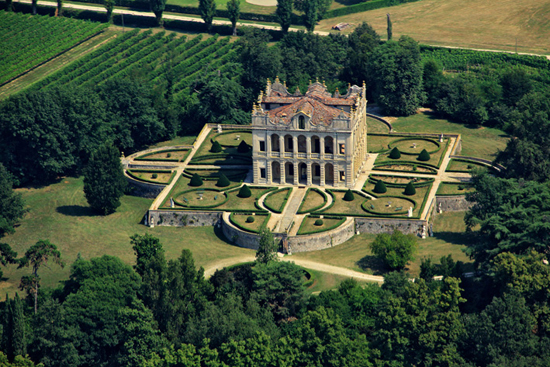 “Here we have the Carraresi, the princes of Padua for 100 years. Then, in 1405, the Venetians arrived and killed them all, except for one, from whom my cousin, Francesca Papafava dei Carraresi, is descended”.

This is the presentation we are given by Count Giordano Emo Capodilista who receives us in the castle situated on the hill opposite the Villa, and shows us portraits of the members of the family who were the lords of Padua for many generations, and which have been brought together as a tribute to his cousin Francesca.

They were two very different families: the Capodilista family arrived in the Veneto region in the eighth century, alongside Charlemagne, to fight Desiderius, the last king of the Lombards and were rewarded with a fiefdom in the Padua area: their nobility is linked to the possession of land.

meant they held political power and had the same dignity as their peers. The patricians made their fortune by trading with the East and served the Republic by taking on various roles: as officials, ambassadors, merchants and soldiers.

As the Count’s stories takes us through the rooms of the castle, we feel as though we are entering a time machine.

There is a bas-relief by the great sculptor Angelo Canova depicting Angelo Emo, the heroic admiral of the “Serenissima” who, in 1786, forced the king of the Tunisians to surrender by bombing the African port using the floating rafts he had invented.

We jump a century and a half as we cross a corridor covered with prints depicting the tragic events of the First World War: the owner’s great-grandfather, Giorgio Emo, was a cavalry general who was distinguished for his heroic resistance against the Austrian army in Friuli.

We go back in time again when we come to the portrait of a young woman wearing the hat of a warrior: she is Maria Carolina of Bourbon-Two Sicilies, Duchess of Berry, a family ancestor who was the grand-mother of Francesca Zileri dal Verme, wife of General Giorgio Emo.

A romantic and ambitious woman, in 1832 Maria Carolina of Bourbon, the wife of the Duke of Berry, did not hesitate to place her son Henri, Duke of Bordeaux,

on the throne of France and take on the role of warrior, fanning the flames of revolt in the Vandea region.

The Castle is filled with precious documents that are testimony of the family’s ancient and illustrious origins. One example is the Capodilista Code illuminated in Basel during the historic Council of 1434 by Giovan Francesco Capodilista, the ambassador of the “Serenissima”. In the Code, the original of which is preserved in the Civic Library of Padua, the diplomat sets out the history of his family, with images of some of the protagonists, starting from the year one thousand.