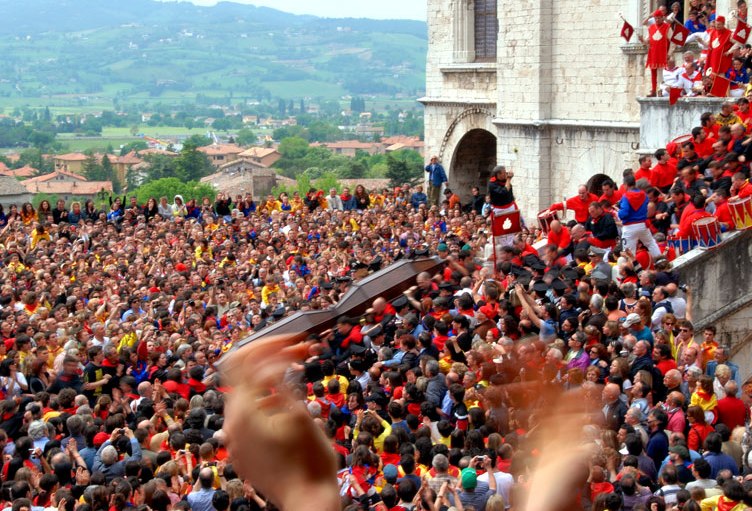 Posted at 15:24h in Events by Caterina Lancellotti

A place that produces “an absolutely astounding effect and has something improbable and exciting about it”: the comment is by the great German writer Herman Hesse and refers to Gubbio, the medieval town in Umbria, in the heart of Central Italy. Let’s see why.

The origins of the city are very ancient as testified by the “Iguvine Tablets” which date back to the III-I century B.C (these are seven bronze tablets written in the Umbrian alphabet and housed in the Civic Museum, a rare Italic document) and the remains of the Roman theater (late I century B.C.) located just outside the walls. 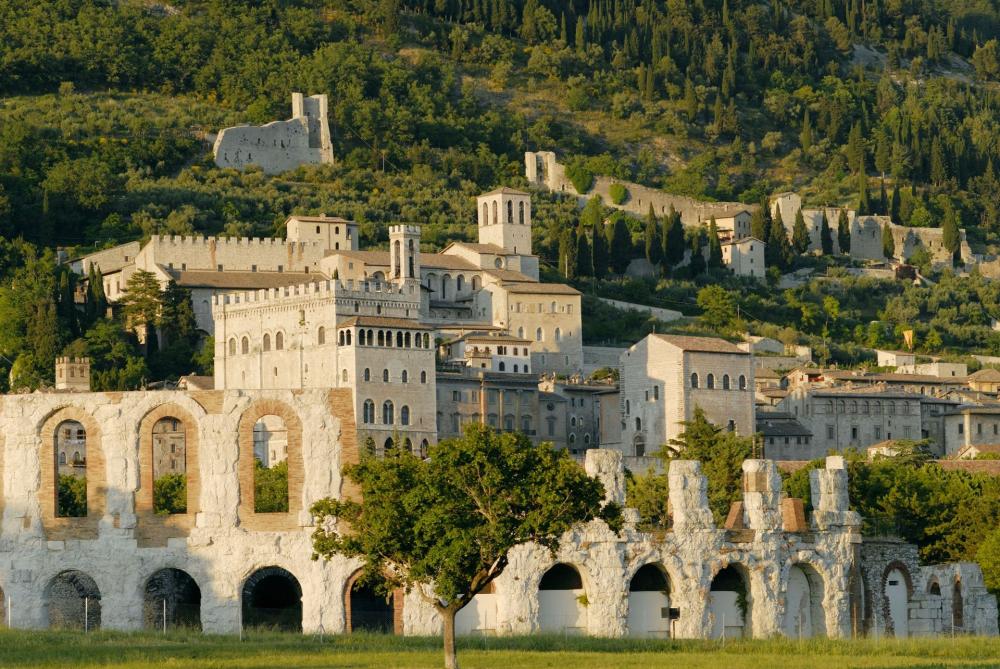 The remains of the Roman theater, Gubbio

From the ancient Romans to the Middle Ages

However the period of Gubbio’s greatest splendor was the Middle ages which has left inhabitants and visitors a truly fascinating urban fabric to this day.

The compulsory point of departure when visiting the city is the monumental complex of Piazza Grande (late XV century), also known as Piazza della Signoria, which links together, in a harmonious sequence, Palazzo dei Consoli, an imposing Gothic-style building which was completed around 1340, today the home of the Civic Museum, and the unfinished Palazzo del Podestà, now a municipal residence. Public buildings both of which, in their time, were the headquarters of the two civil magistratures.  Then there is Palazzo Ducale built for Federico da Montefeltro on a design by Francesco di Giorgio Martini. 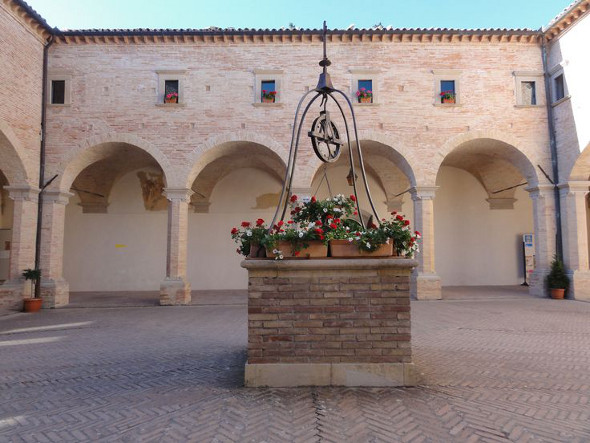 The impressive city walls constructed at the end of the XIII century are perfectly preserved, with six entrance gates to the city which bear traces of the pictorial decorations, coats of arms and ancient wooden doors.  The churches are particularly interesting, from the Cathedral of Saints Mariano and Giacomo (XIII-XIV century) to the church of San Francesco (XIII sec.) and the Loggia dei Tiratori built in 1603 in a spacious piazza at the foot of the city by the corporation of wool weavers where they used to stretch and dry their cloth.

It is also worth vising the environs of Gubbio: visitors will enjoy the Gola del Bottaccione which offers testimony from various periods, from the medieval Aqueduct, the Hermitage of St. Ambrogio and the Chiesa della Vittorina (XIII century) built on the spot where, according to tradition, St. Francis met the wolf of Gubbio.

Finally a visit to the Basilica of Sant’Ubaldo located almost at the summit of Monte Ingino is a real must.  The Basilica can also be reached by cable car and houses the incorrupt body of the Patron Saint of the city and the “Ceri” or candles of Gubbio. 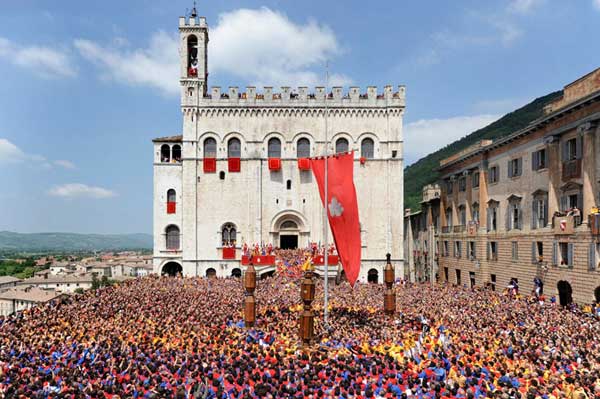 The “Festa dei Ceri”, a race to the Basilica of Sant’Ubaldo

The “Ceri” and Sant’Ubaldo are the protagonists of the life of the local community.

The reason for this can be fully understood on 15 May: every year on that date the “Ceri” or candles are carried on the shoulders of runners in an unbridled race along the streets of the city to the Basilica of St. Ubaldo on the summit of Mount Ingino.

A not insignificant detail about this event is that these “candles” are actually three gigantic wooden structures in the form of prisms placed on top of each other which are over four meters high and weigh around 4 quintals. Each of these structures is surmounted by the statues of Saint Ubaldo (patron saint of masons), Saint George (patron saint of haberdashers) and Saint Antonio Abate (patron saint of donkey handlers and farmers).

The most ancient Italian folk festival

The “Festa dei Ceri” (Race of the Candles) is one of the most ancient, if possibly the most ancient folk festival in Italy and plays a fundamental role for the community of Gubbio. Two hypotheses exist regarding its origins. The most accredited one presents the Festival as a solemn act inspired by the devotion of the residents of Gubbio to their Bishop Ubaldo Baldassini ever since his death in May 1160. 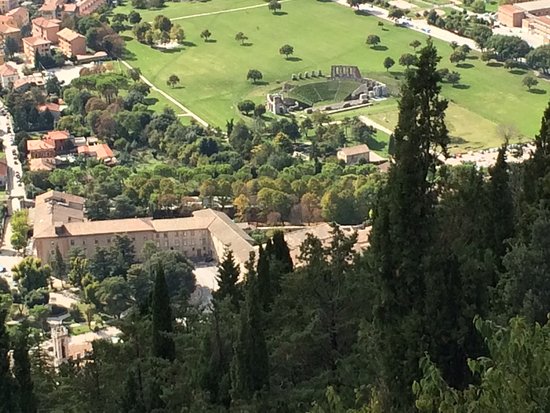 Since then, every year on 15 May, the day of the eve of his death, the devotional offering to the city’s Patron Saint has become a fixed rendezvous for the people of Gubbio who take part, with a mystical procession, in a great “Illumination” of wax candles, processing through the streets of the city all the way to Mount Ingino (where the body of Saint Ubaldo has rested since 11 September 1194 in the Basilica that bears his name).

It is probable that over time the wax candles originally offered by the corporation of Arts and Crafts became so large as to render transportation difficult and towards the end of the 16th century they were replaced with the three wooden structures it is still possible to see today. The date and essentially the route of the festival have remained unchanged over the years.

The other hypothesis (which is less documented) goes even further back in time and attributes the origins to a pagan festival in honor of Ceres, the goddess of the harvest: a propitiatory rite of spring. 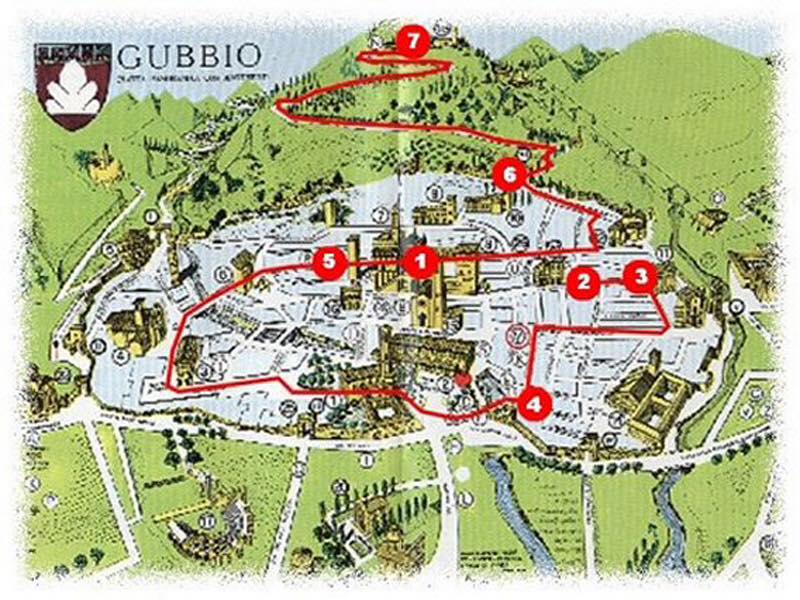 The route taken by the race of the Candles

15 May, everyone in Piazza Grande

It is worth describing the route taken by the race of the Candles. It starts at midday in Piazza Grande with the spectacular “raising” of the “Ceri” or Candles which make three trips around the piazza. After being “displayed” in the streets of the city, the candles are laid down in Via Savelli until the race begins. In the afternoon the procession with the statue of Saint Ubaldo starts from the Duomo and goes up to the top of Via Dante where the Bishop blesses the “Ceri” which thus begin the race along the main streets of the city. Upon their return to Piazza Grande they go round it another three times and arrive at the Porta dell’Angelo or Angel’s Gate where they begin their ascent to Mount Ingino. The “Ceri” are placed in the Basilica of Saint Ubaldo whilst the little statues of the three Saints are carried back to the city amidst singing and torchlight processions. 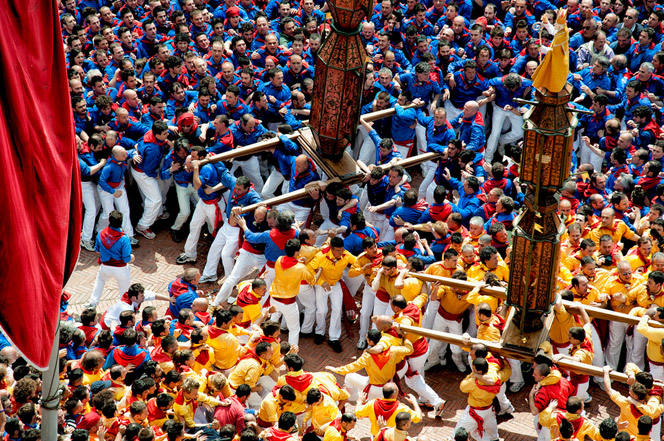 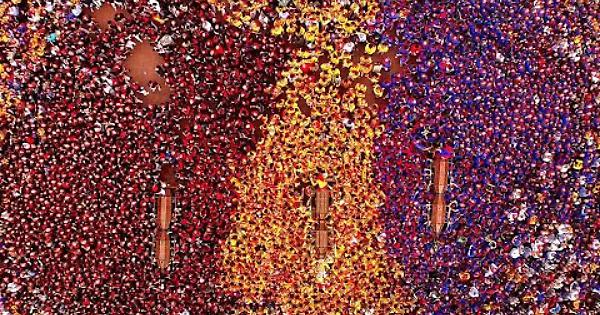 It is essential to attend this Festival at least once – albeit very discreetly because the residents do not welcome “invasions” of outsiders – in order to appreciate the extraordinary emotional participation of the population of Gubbio. To see the candle-bearers or “ceraioli” who, heedless of the exertion and the risk of falling, run crazily up Mount Igino. Yes, because if the “Ceri” fall it is a tragedy: people cry and get very upset. The great thing is that there is none of the classic rivalry between the three “teams” carrying the “Ceri” because they run in a line and cannot overtake one another: the first to arrive in the Basilica of Saint Ubaldo will always be the candle of Saint Ubaldo.

Crazy, but not at the table

It may be a coincidence but it is impossible not to associate the Race of the Candles with the fact that Gubbio is known as “the city of crazy people”. The unpredictability of its inhabitants is accompanied by a strong dose of self-mockery: even visitors, if they so wish, can get a “crazy” license. They just have to go around the Fontana del Bargello, also known as the Fontana dei Matti – Fountain of Crazies three times. The souvenir-license, complete with first and last name, can be purchased from the store next to the fountain.

However when the inhabitants of Gubbio sit down at the table they put aside any surprises and strangeness: the cuisine of Gubbio consists of very old, simple and genuine recipes thanks to the 0 Km raw materials (game, lettuce from the countryside, cheeses, cold meats, meats from mountain pastures etc.).

The Baccalà alla Ceraiola salted cod dish is famous (it is left to soak for at least 2 days after which it is coated in breadcrumbs and baked in the oven together with rosemary, salt, pepper and white wine) and is the traditional dish of 15 May, the day of the “Festa dei Ceri”. 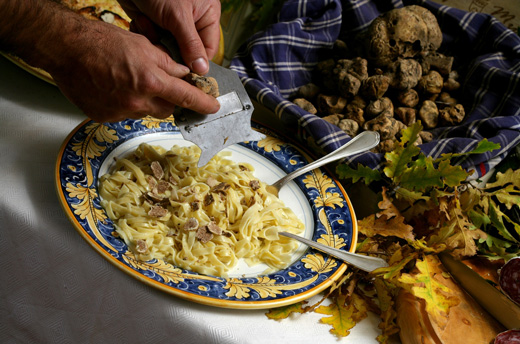 For those who do not want fish there is the Friccò featuring chicken, duck, lamb and rabbit, meats which are stewed and flavored with rosemary and tomato sauce, cooked with a touch of white wine and white wine vinegar. Before that it is well worth trying the stringozzi, irregular-shaped pasta that is very similar to fettuccine, usually dressed with White Truffle and Black Truffle (precious fruits of the land of Umbria).

Finally, for a quick snack we recommend Crescia al Panaro, a kind of “focaccia” (flat oven-baked bread) that can be filled or accompanied by local cold meats and cheeses.

This is a “poor” product of peasant origin that is prepared very simply using water, flour and yeast and baked underneath the ashes on the so-called “panaro” which is a circular wrought iron slab. A very tasty example of street food.