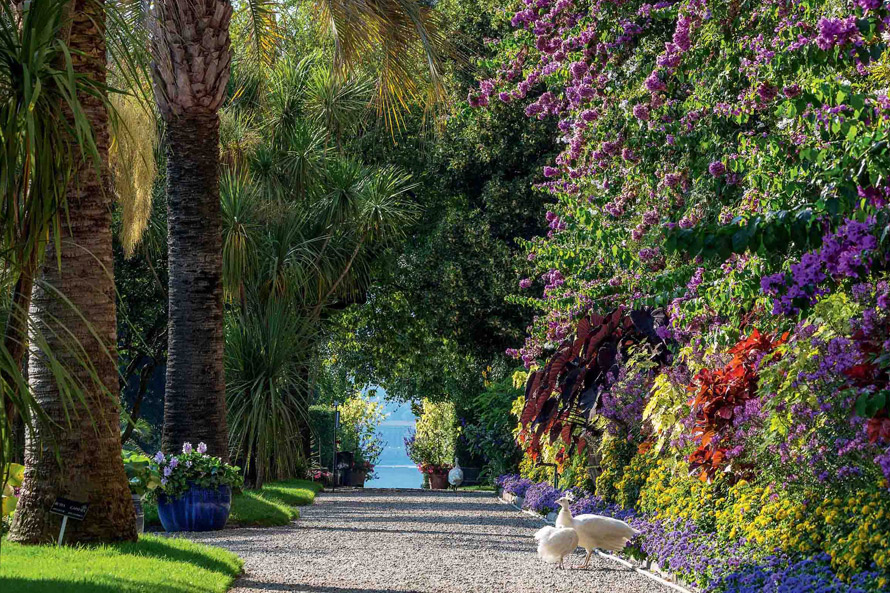 Posted at 16:50h in Italian itineraries by Caterina Lancellotti

The poet Montesquieu called it “The most beautiful place in the world”. It was greatly loved by Hemingway and the favorite holiday destination of the British royal family. We are talking about the archipelago of the Borromean Islands on Lake Maggiore: three islands – Isola Madre, Isola Bella, Isola dei Pescatori – along with the Isolino di San Giovanni and the Rock of Malghera – that enrapture visitors in a surprising itinerary blending history, art and nature. 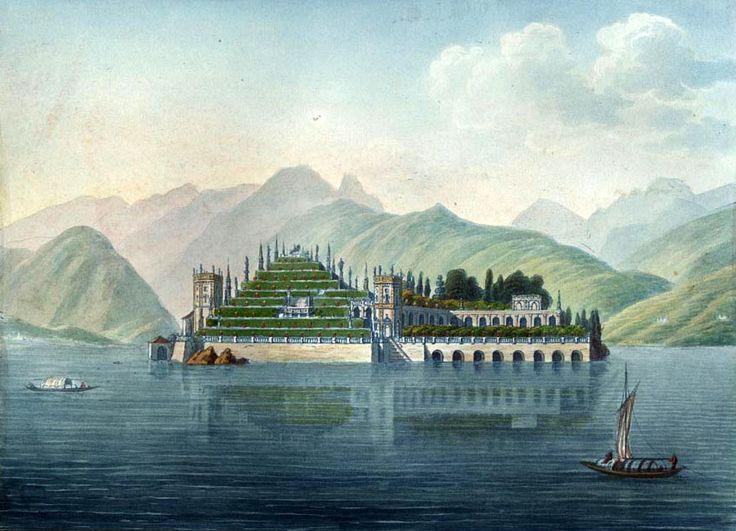 Since the 18th century the Borromean Islands have been a holiday resort for the great noble families of Lombardy, especially the Borromeo and Visconti families: this was where they spent their vacations and for this reason, over the years, where they built their sumptuous residences. Above all it was the noble Borromeo family, originally from Florence which, once it became the owner of the islands in the XIV century, changed their appearance by building villas and gardens. Today the family still owns Isola Bella, Isola Madre and the two rocks known as Castelli di Cannero, which contain ruins of medieval buildings.

Visitors travel to Isola Madre and Isola Bella, also called “the sisters”, from every part of the world because of their splendid palazzos and gardens, the latter being famous for the variety of species of trees and flowers that are able to capture the emotions of the tourist as well as the interest of the scholar.
It was 1630 when Count Carlo Borromeo III transformed the Lower Island – which he renamed Isola Isabella (later to become Isola Bella) after his wife Isabella d’Adda – from a humble fishing village to a place of extraordinary majesty. He took forty years to do this, along with his son Vitaliano VI and with the help of many important architects of the period.

A gigantic vessel emerging from the lake

Today Isola Bella appears as a gigantic vessel emerging from the lake where the stern is the garden and the 10 sloping terraces and the bow, pointing towards the Isola dei Pescatori, is marked by the jetty and the tip of the island. 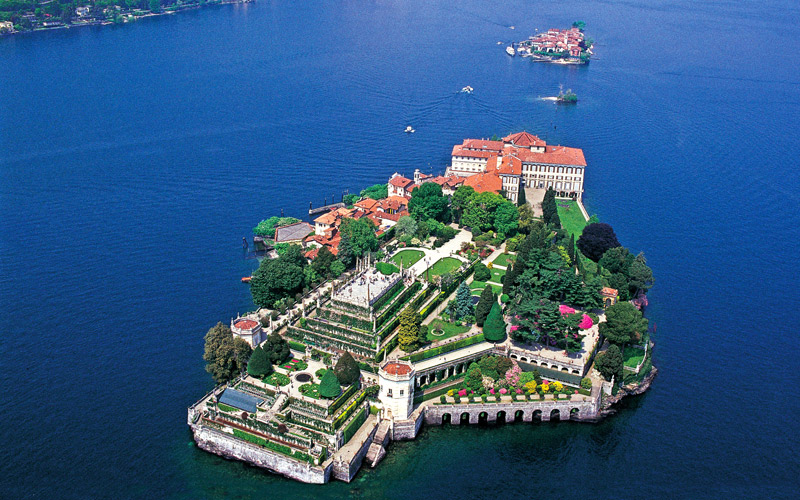 The garden on Isola Bella is considered to be the most beautiful Baroque garden in Europe. No less enthralling is a visit to the Palazzo, a casket of Baroque art suspended on the water. It is truly thrilling to walk through the rooms with their splendid views of the lake filled with paintings by famous artists, extremely valuable furniture, marbles, neoclassical stuccoes, ancient sculptures, armor and Flemish tapestries of gold and silk. In 1797 Napoleon Buonaparte stayed here with his wife Josephine. 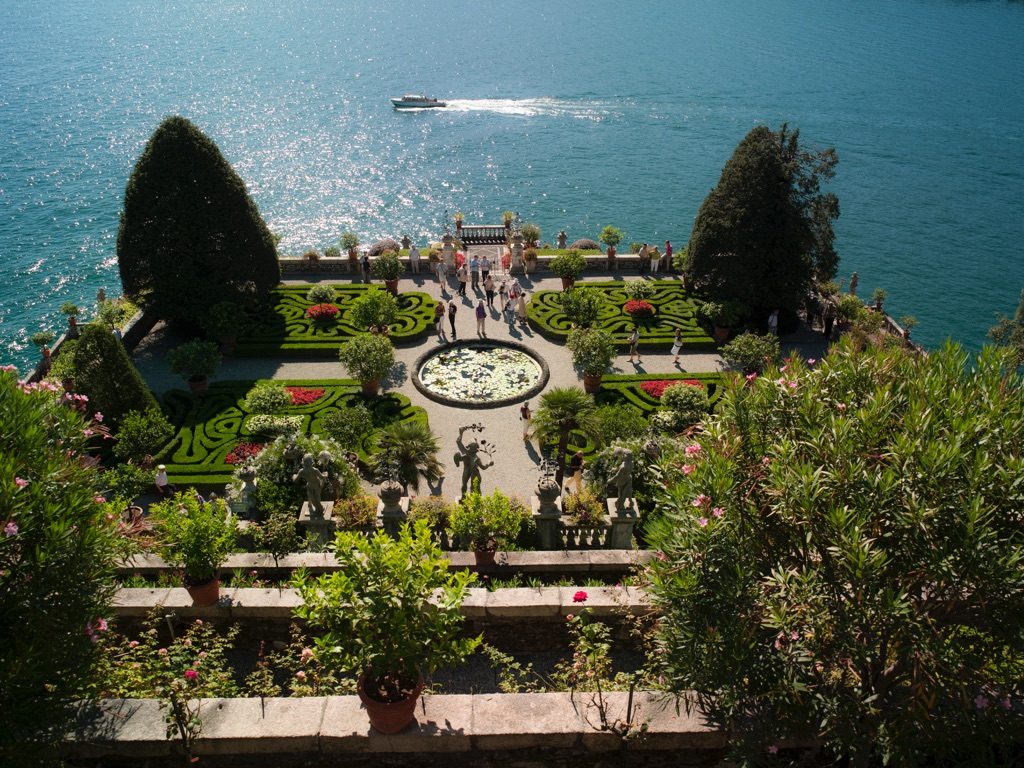 The Isola Madre – so called because it is the biggest island in the archipelago– was also totally transformed by the Borromeo family. They built a Palazzo here as well in the early 16th century, choosing it as their summer residence, and in the garden they began to grow olives, vines and citrus fruits. In 1603 it was described as: “A delightful place for princes…exceedingly healthy for the goodness of the air which is extremely temperate….”
To this day the botanical garden on the Isola Madre is truly unique for its variety of plants and animals. 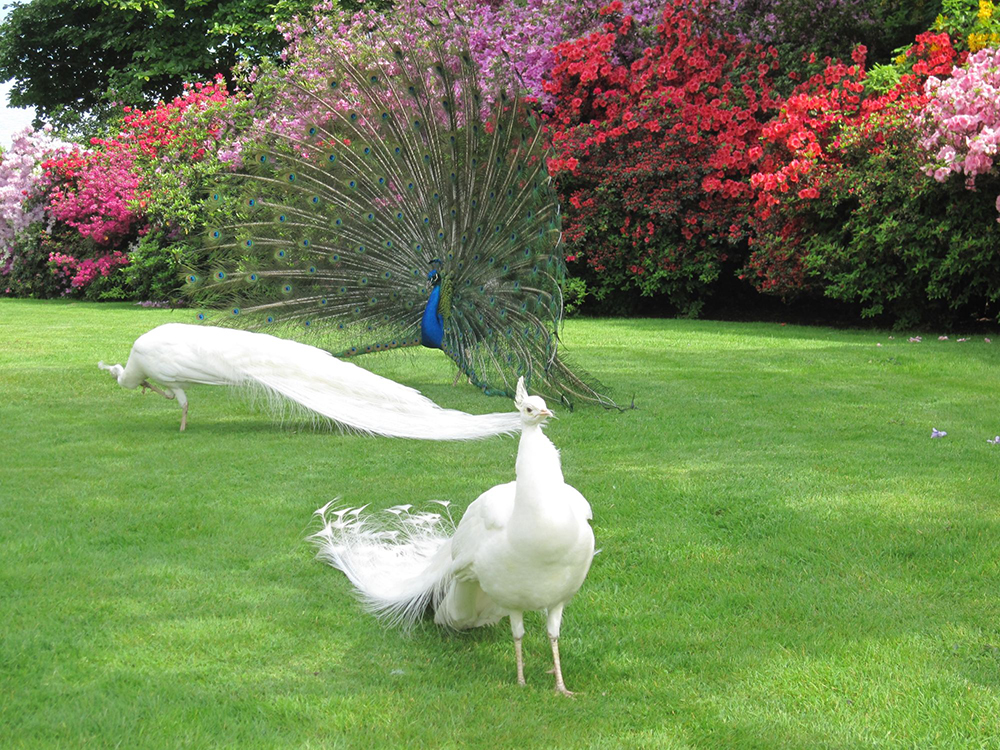 This is true in every season but particularly in spring time when hundreds of specimens from azaleas to rhododendrons to camellias, magnolias and wisteria are in bloom. Taking a stroll in the garden is an unforgettable experience. White and colored peacocks, gold, silver pheasants, ducks and moorhens appear suddenly from every direction; the aviaries are filled with budgerigars. 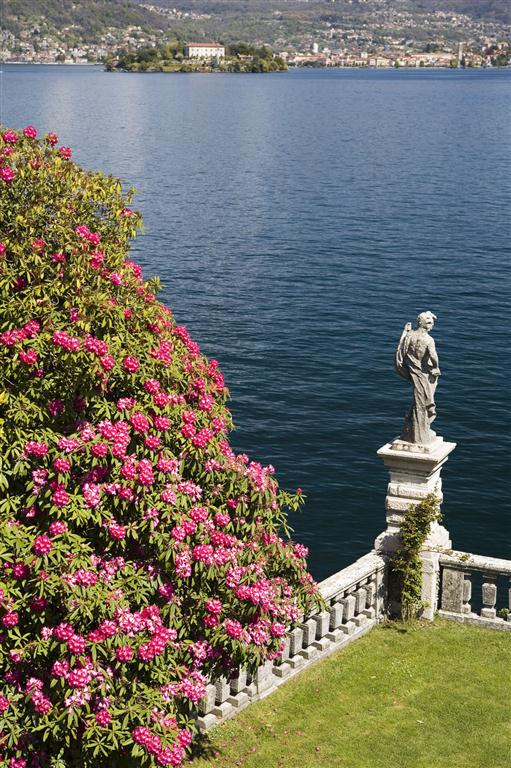 There are various unknown exotic plants (like Feijoa Sellowiana, Taxodium Distichum, Camellia sinensis, Cinnamomum camphora, Cupressus Cashmeriana ‘glauca’) as well as many other exotic varieties. The excitement continues with a visit to the Renaissance-style Palazzo which has only been opened to the public relatively recently, in 1978: it is a museum filled with valuable furnishings from the various residences belonging to the Borromeo Family that take the visitor back to the lifestyle of the XVI and XVII century. The section dedicated to the Borromeo family’s little puppet theaters is unmissable. From the mid XVII century onwards their performances were essentially used to entertain and amuse the members of the family, their friends and even their servants. 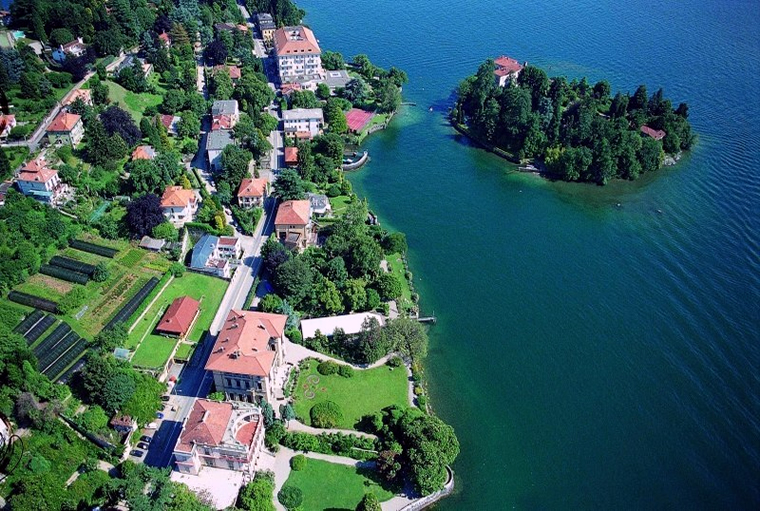 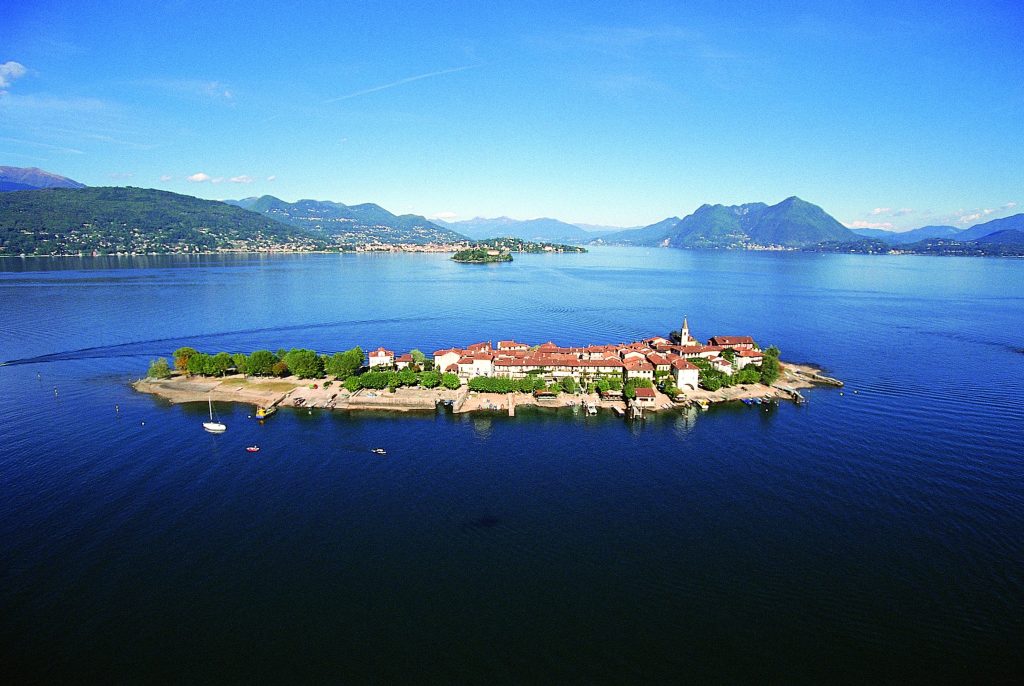 The Isolino di San Giovanni and the Isola dei Pescatori

Worth a mention is the Isolino di San Giovanni, also owned by the Borromeo family (which, unfortunately, it is not possible to visit), if only for the fact that, between 1927 and 1952, it was the residence of the famous conductor Arturo Toscanini who lived in the 17th century Palazzo Borromeo.
The only island in the Gulf of Borromeo that does not belong to the family is the Isola dei Pescatori. A fishing village up until fifty years ago, it has been turned into a tourist village where around fifty people still live. It is best to visit in the fall or the winter, when the island is returned to the islanders and just a handful of tourists.

Rocca d’Angera, a castle built on a rocky spur 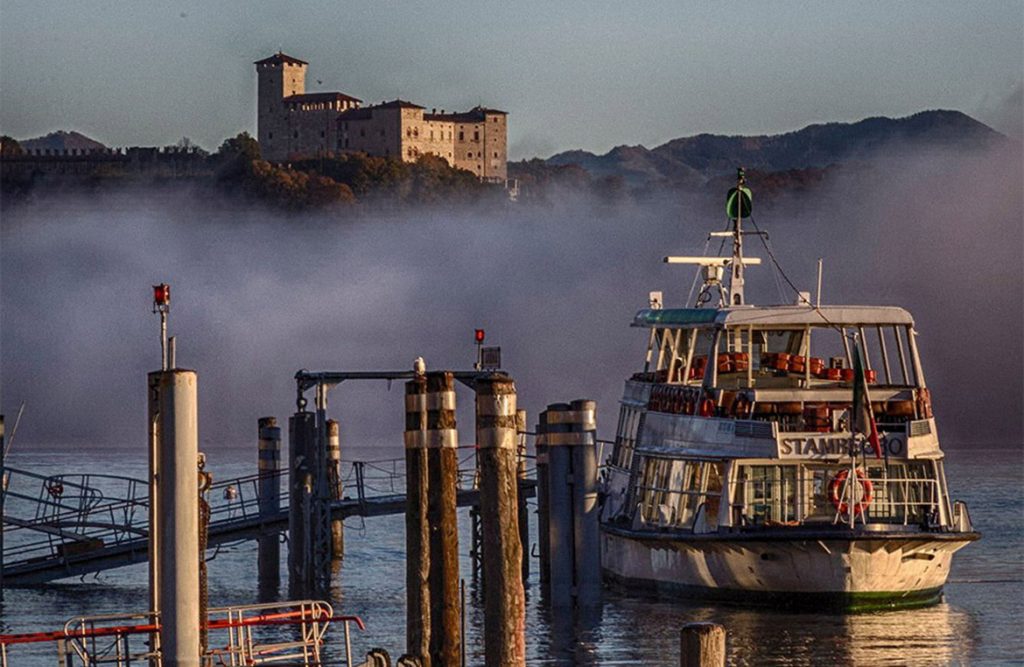 Finally, before leaving Lake Maggiore, for the more curious and sophisticated visitor, we advise a stopover at Rocca d’Angera, a castle built on a rocky spur that majestically dominates the southern strip of Lake Maggiore.

Apart from a precious collection of majolica – around three hundred rare pieces – its rooms also house the Museo della Bambola e del Giocattolo [Museum of Dolls and Toys].
Founded in 1988 by Princess Bona Borromeo Arese, the Museum contains over a thousand dolls from the XVIII century to the present day made using some of the most famous and popular ancient traditional materials: wood, wax, papier-mâché, porcelain, biscuit, composition, fabric.

Museum of Dolls and Toys

The exhibition is distributed over twelve rooms which are flanked by separate mono-themed sections: one dedicated to dolls and toys from non-European cultures, the other to the collection of the Petit Musée du Costume of Tours assembled by Giséle Pesché, consisting of an extraordinary series of French and German XIX century robots. Due to the quality and quantity of the exhibits on display, the Museo della Bambola e del Giocattolo is one of the most important in its category in Europe. 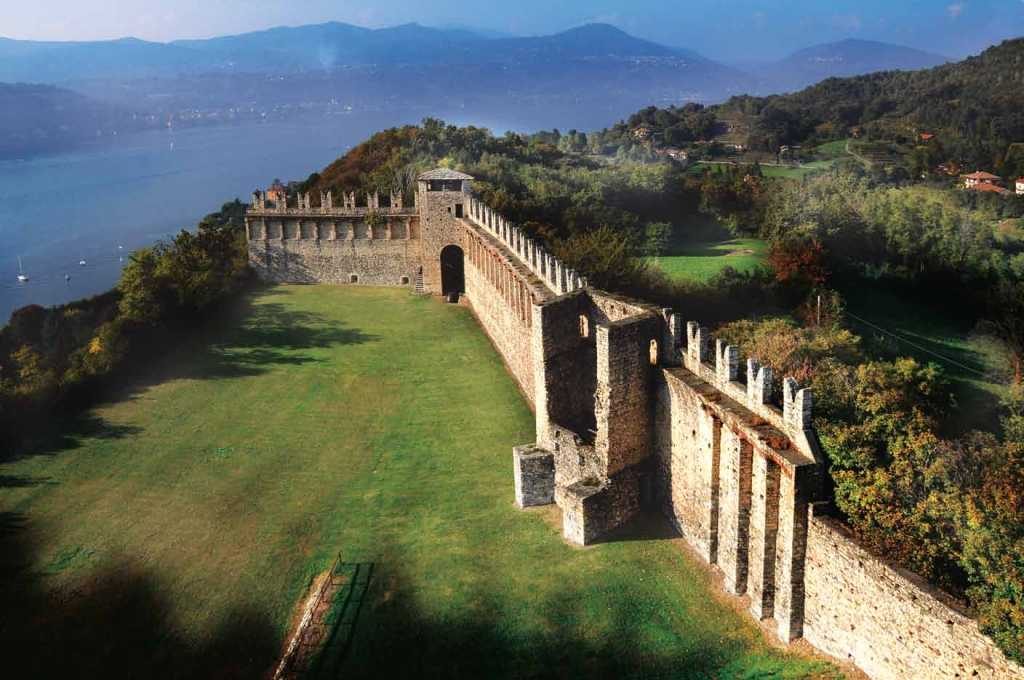