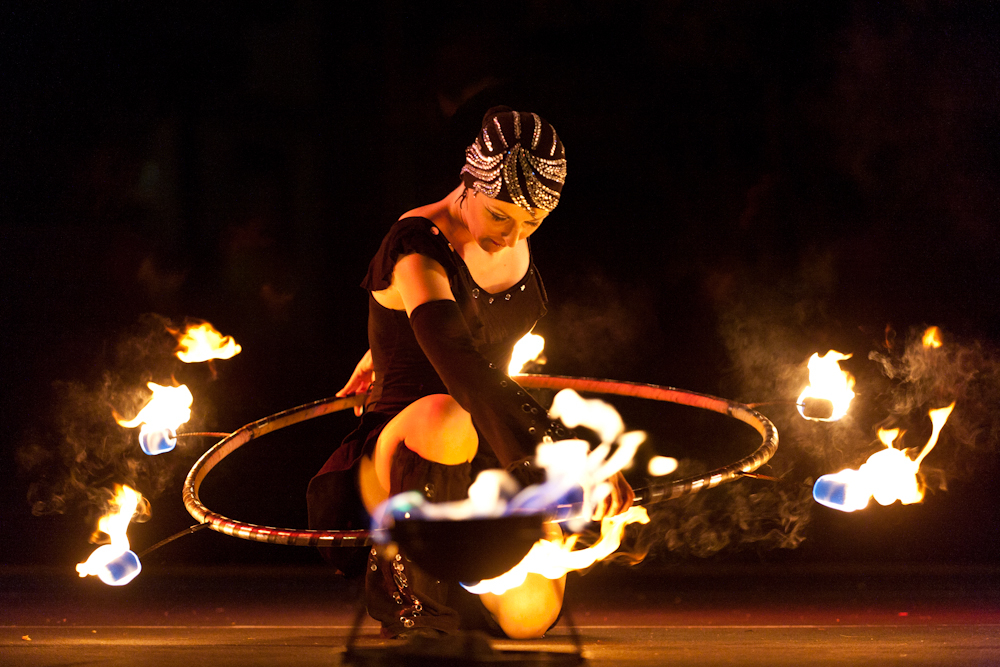 The feather in the cap of the tourist-cultural proposals of the Mediterranean islands, an event that is unique in Italy, the Teatro del Fuoco ® International Fire-dancing Festival is a multicultural artistic project created to promote Sicily through the art of fire, using powerful expressive channels such as music, dance, acrobatics and mime.

“The principle” explains journalist Amelia Bucalo Triglia, the creator of the Festival, “is Sicily’s central position as a place of light in the Mediterranean”.

“Fire”, she continues, “is a metaphor for energy, passion, love, elegance, the conviviality of the people and the vivid, strong colors of the nature of Sicily”.

The Teatro del Fuoco is inspired by the ethics of sharing and of respect for identity theorized by the economist Jeremy Rifkin, author of “The Empathic civilization”.  The American scholar overturns the commonplace view according to which human beings are by nature aggressive and utilitarian,  affirming people’s natural inclination to identify themselves with the state of mind of others, i.e. to relate to other people in an empathic way, also redefining the course of economic development and lifestyles and moving towards greater environmental sustainability.

The principles of the Empathic Civilization are the cohesive element that binds the 55 artists in the Teatro del Fuoco.  They come from every part of the world: the Slovak Republic, Hungary, Poland, Argentina, France, Germany, New Zealand, Israel, Australia and Kenya; but they all share the same cultural codes in their individual and group behavior.

In fact, the theme of the next edition – every year the Festival symbolically articulates the various meanings of Fire in different themes – is Empathy.

In addition to the extraordinary interest it has now generated with the international public – certainly helped by the mention in Forbes last year – the fair has also received some important institutional recognitions: it was awarded an honor by the president of the Republic of Italy and it was a testimonial for Italian culture in Tokyo on the occasion of the “Italia, amore mio!” event held last May to celebrate the 150th anniversary of diplomatic relations between Italy and Japan.

Borrowing the principles that inspire the Teatro del Fuoco, we asked Amelia Bucalo Triglia to suggest three “empathic” places in Sicily for our readers to note in their calendars, truly must-see destinations.

“Every trip through Sicily should start from the Cappella Palatina in Palermo: this is the best way to understand the Mediterranean”.  Commissioned by the Norman King Roger II in 1130 inside the architectural complex of the Palazzo dei Normanni – Norman Palace, the Cappella Palatina is in fact the location par excellence where western and eastern culture meet: here Arabs, Normans and Byzantines all worked together thanks to the policy of tolerance adopted by the Norman king.

Another empathic place according to Amelia Bucalo Triglia is The Necropolis of Pantalica, “a place where time appears to have stopped”.  The biggest necropolis in Europe, it dates back to the first half of the XIII century B.C. and consists of around 80 hectares of great natural value.  Recognized as a World Heritage Site by UNESCO since 2005, it is located in the south-eastern part of Sicily, on a plateau not far from Siracusa.

It is also worth savoring “the sunset at the Saline di Trapani”, to the west of  Palermo, a natural oasis of almost one thousand hectares, a journey among the basins, canals, windmills and baileys; a display of colors that, at sunset, are some of the most beautiful to be found in the Mediterranean.  According to the WWF website, walking along the canals of the Saline or salt mines of Trapani, “the only sounds you can hear are the waves and the seagulls.  The rest is just horizons, mountains of salt and birds in flight”.

And finally Amelia is convinced that you cannot say you have truly been to Sicily without tasting the Sicilian “Cassata” cake: “an explosion of sweetness and colors”.