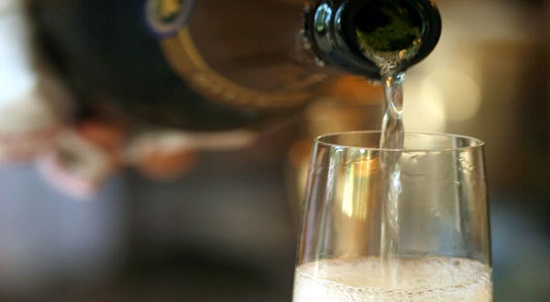 Always more wine toasts in the world are Made in Italy: for the first time, in 2013, the export of Italian Prosecco, the famous white wine produced in the north east of Italy, in the Veneto and Friuli Venezia Giulia regions, beats French Champagne.

This data comes from the Observatory of Economic Studies on Effervescent Wines: the export of Italian wines is going well, with a two figure increase both in quantity (+11,5%) and in the values (+16%) on 2012. Valdobbiadene, Conegliano, Cartizze, Asolo, Prosecco Doc, Glera: these are the types and areas of the most famous bubbly in Italy, that owes its name to the homonymous town situated near the city of Trieste and to two marketing operations made at the beginning of the 1500s.

The name comes from two marketing operations. At the beginning of the 1500s in Trieste, to give more visibility to the main local product, the ribolla is declared the natural heir to the famous ancient wine called the pucino, Livia, Emperor Augustus’ wife’s favourite wine, because of its medicinal properties.

Towards the end of the century, the need to distinguish the Triestine  ribolla  from other wines with the same name brought a change in its denomination and a specific geographical characterization of it, prompted by the place where it was produced in ancient times, from the castellum nobile vino Pucinum  to the Castello of Prosecco, near the homonymous town.

The first known citation of the change of denomination is by an English gentleman called Fynes Moryson who came to visit northern Italy in 1593 and places the Prosecco among the famous Italian wines together with the Lacrima Christi, the most famous wine from the Vesuvius, the Vernaccia of the Cinqueterre, the White Muscadine (especially the Montefiascone one, from Tuscany) and the Falerno wine from the Kingdom of Naples.

Back to the charts. The value of Italian vineyards is also increasing and are just behind the French vineyards.

The most esteemed  are the Alto Adige ones (the most northern region of Italy, on the border with Austria) which are valued at a steady 550.000 euros per hectare; the Amarone ones (produced in Valpollicella, near Verona) with a fluctuating value from 480.000 to 500.000 euros, followed by the Conegliano and Valdobiadene Prosecco which are between 380.000 and 350.000 euros per hectare.

This is the scenario of the “listings” of the most precious vineyards of Italy outlined by a survey from WineNews that has been the topic of discussion of Vinitaly, the International reference exposition, in the world of wine, that was held in Verona from the 6th to the 9th April.

Holiday to Italy, Italian food, Italian Wine, Made in Italy